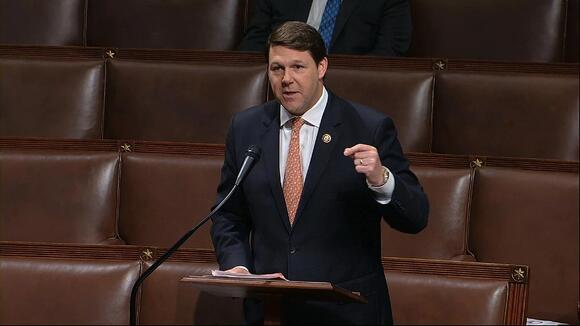 House Republicans in the Texas delegation on Thursday released a framework of proposals to curb the migration surge at the southern border.

Specifically, measures proposed include resuming the building of a border wall system, boosting retention of Border Patrol agents, barring federal grants from going to non-governmental organizations that support and assist U.S.-bound migrants, reforming the asylum system to “limit asylum to those with actual fear of persecution,” and designating cartels as foreign terrorist organizations.

“Our Texas delegation is committed to using every tool and authority at our disposal to hold President Biden, [Homeland Security] Secretary [Alejandro] Mayorkas, and this entire administration accountable for their dereliction of duty to support our state leaders in their efforts to defend Texas in the face of this clear and imminent danger and to put the policies in this framework into place that will protect our citizens and secure our sovereign border,”  Rep. Jodey Arrington (R-Texas) said at a press conference on Thursday.

The plan, they said, is a continuation of the House GOP’s “Commitment to America” policy and messaging framework that was released before the midterm elections.

“We know this border better than anybody. We live it,” Rep. Mike McCaul (R-Texas) said. “They say, ‘Every state’s a border state.’ I don’t think so. We get overrun every day by the cartels, criminals, drugs, fentanyl, the human trafficking.”

The plan comes as an immigration deal is in the works in the Senate , proposed by Sens. Thom Tillis (R-N.C.) and Kyrsten Sinema (D-Ariz.). That plan aiming to attach a boost in border security funding to a pathway to citizenship for recipients of Deferred Action for Childhood Arrivals (DACA), or “Dreamers.”

“People run to go do games and fill in the blank to go cut some deals ahead of time. We need to restore regular order in this place and start with the ways that we can actually solve the problem,” Rep. Chip Roy (R-Texas) said. “We know we need to deal with immigration issue. But we need to secure the borders right now.”

Rep. Mayra Flores (R-Texas), an outgoing representative who was born in Mexico, blamed the Biden administration and Democrats for not doing more.

“Now you’re remembering about DACA?” Flores said. “Stop using this issue, stop using us to get our vote. And then you toss us aside. I think exactly what the Democratic Party has been doing.”

Arrington said House Minority Leader Kevin McCarthy (R-Calif.) and House GOP leadership may not know all the details of the Texas GOP delegation plan, but that they are generally supportive and “expect Texans to be at the fore of leading these this fight and the policies that need to be put in place.”

Every GOP member and member-elect from Texas signed on to the plan except for Rep. Tony Gonzales.

it's about Damn time they start taking this seriously! The Biden administration has been a complete and Total Failure. We need to stop this Now! Before someone Really bad sneaks through if we're not too late already.

I don't understand why Biden & his Administration simply refuse to believe or act on the problems at our borders! He would rather take the sky Marshall's off our planes & send them to the border patrol! Somebody needs to ask & demand an answer for this ongoing problem! The border states are being responsible for relocating the illegals to different areas! That's not their job! Biden needs to man up and put a screeching halt to this as he should have when he was first elected!

The White House on Thursday bashed House Republicans for voting to kick Rep. Ilhan Omar (D-Minn.) off the Foreign Affairs Committee over her past comments about Israel, calling it a “political stunt.” “What we believe is Congresswoman Omar is a highly respected member of Congress. She has apologized for her comments she made in the…
5 HOURS AGO
The Hill

A bipartisan pair of lawmakers introduced legislation on Wednesday designed to keep firearms from the hands of violent people — a wildly popular idea that has virtually no chance of moving in the GOP-controlled House. Sponsored by Reps. Brian Fitzpatrick (R-Pa.) and Mike Thompson (D-Calif.), the bill would require background checks for essentially all gun…
CALIFORNIA STATE・1 DAY AGO
The Hill

The GOP needs to pick a side on border security

The American people can see who is serious about securing our borders and who isn’t. That means a floor vote.
1 HOUR AGO
The Hill

A coalition of moderate House Democrats is offering a helping hand to Speaker Kevin McCarthy (R-Calif.) and President Biden in debt limit talks while urging them to work toward “good faith negotiations” as both leaders prepare to meet on Wednesday.  “With the deadline to increase the statutory debt limit only a few months away, we…
2 DAYS AGO
The Hill

Sen. Tim Scott (S.C.), the lead GOP negotiator for police reform in the Senate, on Thursday rejected the idea of taking up the George Floyd Justice in Policing Act, which was passed by the House in the last Congress. “Resurrecting the House progressives’ police reform bill is a nonstarter. I’ve been working toward common ground…
MINNESOTA STATE・7 HOURS AGO
RadarOnline

Democratic House Rep. Maxine Waters came under fire this week after it was revealed her daughter was paid more than $192k in campaign funds to run the congresswoman’s “slate mailer” operation, RadarOnline.com has learned.Waters’ daughter Karen reportedly earned $192,300 between January 2021 and December 2022 for running her mother’s operation that sees the 84-year-old California congresswoman endorse candidates and ballot measures via political advertisements that are then mailed en masse to residents throughout the state.According to Daily Mail, Waters also received payments for appearing on the slate mailers and her daughter has reportedly collected more than $1.2 million since the...
CALIFORNIA STATE・1 DAY AGO
The Associated Press

CLAIM: House Republicans are requiring Rep. Jamie Raskin, a Democrat from Maryland, to remove the headwear he’s donned on the House floor while undergoing chemotherapy. AP’S ASSESSMENT: False. Republicans have made no such request and have in fact been nothing but supportive, a spokesperson for Raskin told The Associated Press.
MARYLAND STATE・20 HOURS AGO
Newsweek

On Saturday Haley tweeted: "It's time for a new generation to lead."
SOUTH CAROLINA STATE・1 DAY AGO
The Hill

The Republican-controlled House Oversight and Accountability Committee has disbanded the Subcommittee on Civil Rights and Civil Liberties, which focused on issues including voting rights, freedom of assembly and criminal justice reform policies. In a committee meeting on Tuesday, Chairman James Comer (R-Ky.) said this doesn’t mean topics related to these issues can’t be brought before…
2 DAYS AGO
The Hill

Senate Republican Leader Mitch McConnell (Ky.) on Wednesday accused Majority Leader Charles Schumer (D-N.Y.) of hypocrisy for refusing to negotiate with House Republicans on raising the debt limit, even though the Democratic leader saw the debt limit as “leverage” to negotiate spending increases with former President Trump.   “It is right, appropriate, and entirely normal…
WASHINGTON STATE・1 DAY AGO
The Hill

Republicans in the Iowa state legislature introduced a bill on Monday that would make it a felony to manufacture or prescribe mifepristone, one of two drugs used in medication abortions. The bill would make it illegal to “manufacture, distribute, prescribe, dispense, sell or transfer” generic or brand-name mifepristone in the state, punishable by up to…
IOWA STATE・2 DAYS AGO
The Hill

These are the states Americans are moving to

Story at a glance More people moved to Florida than any other state in the country in 2022, according to a new report from the National Association of Realtors. The Sunshine State saw the highest net domestic migration gains last year, with its population growing by 1.9 percent. It was followed by Texas, North Carolina,…
FLORIDA STATE・1 DAY AGO
The Hill

The Senate GOP campaign arm’s endorsement of Rep. Jim Banks in the Indiana Senate Republican primary on Tuesday marks an official departure from the committee’s policy in the 2022 cycle and makes clear it will play in primary contests in an attempt to win back the upper chamber.  After a midterm cycle that saw candidates…
INDIANA STATE・1 DAY AGO
The Hill

Senate Minority Leader Mitch McConnell (R-Ky.) has pulled Sen. Rick Scott (R-Fla.), who tried to oust him as the Senate’s top Republican in a bruising leadership race, off the powerful Commerce Committee.   McConnell also removed Sen. Mike Lee (R-Utah), who supported Scott’s bid to replace McConnell as leader, from the Commerce panel, which has…
FLORIDA STATE・1 DAY AGO
The Hill

Close to 80 percent of voters in Santos’s district think he should step down: poll

Nearly 80 percent of voters who live in embattled Rep. George Santos’s New York district want him to resign from Congress, according to a new survey that comes the same day the first-term Republican told colleagues he’d be stepping down from his committee assignments. A Newsday/Siena College poll released on Tuesday, which questioned voters from…
NEW YORK STATE・2 DAYS AGO
The Hill

Nikki Haley, a former two-term South Carolina governor and U.S. ambassador to the United Nations, is anticipated to announce a 2024 White House bid, becoming the second Republican to officially wade into the GOP presidential primary and the first to challenge former President Trump. The official announcement, expected to come on Feb. 15, caps months…
SOUTH CAROLINA STATE・1 DAY AGO
The Hill

Speaker Kevin McCarthy (R-Calif.) called a White House memo outlining President Biden’s plan for their meeting on Wednesday “political games.” The memo, released on Tuesday, said Biden will ask McCarthy if he will commit to avoiding a default and if he will release a budget proposal outlining House GOP spending plans. “Mr. President: I received…
2 DAYS AGO
The Hill

Senate Majority Leader Charles Schumer (D-N.Y.) told reporters Thursday that there’s no daylight between himself and President Biden on the question of standing firm against negotiating with House Republicans on raising the debt limit until they manage to pass a package of cuts or fiscal reforms. Schumer said Biden and White House staff assured him…
6 HOURS AGO
The Hill

White House chief of staff Ron Klain’s forthcoming departure from office has concerned liberals who have come to know him as a crucial ally in President Biden’s Washington. Klain, one of Biden’s oldest confidants, has worked to ease the Democratic Party’s divide, serving as connective tissue between progressives and the establishment figures closest to the…
ILLINOIS STATE・1 DAY AGO