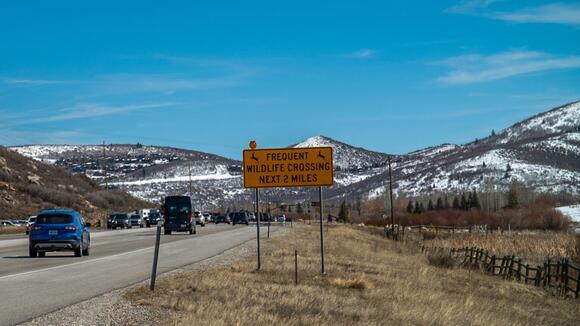 SALT LAKE CITY – Through the construction of wildlife crossing facilities on roadways around Utah, the Utah Division of Wildlife Resources (DWR) and Utah Department of Transportation (UDOT) are attempting to lower the number of wildlife-vehicle collisions. However, due to the unfortunate fact that these crashes still happen occasionally, the agencies have made it simpler for individuals to report dead animals on Utah roads by releasing a new app, the Utah Roadkill Reporter.

The new Utah Roadkill Reporter app is available for free in both the Google Play store and Apple’s App Store. The app will allow people to easily report the location and description of any dead animals they see on or near roads, so those animals can be removed more quickly from highways and freeways by DWR and UDOT employees who have access to the data. Dead animals left on roads can become traffic hazards and can cause additional incidents.

“It is important for us to understand how many wildlife-vehicle collisions occur in Utah,” DWR Utah Migration Initiative Coordinator Blair Stringham said. “This new app will allow us to know exactly when and where collisions occur, which will help us identify hot spot areas on Utah highways. We can then work with UDOT and other partners to install underpasses, fencing, wildlife overpasses and other structures to reduce collisions in those areas and keep wildlife and people safe.”

Along with the kind of animal and the GPS coordinates, users of the app have the option to attach a photo of the animal when reporting roadkill. Due of safety issues along busy roadways, UDOT and DWR advise against using the app while driving and advise against getting out of your car to submit a complaint.

If a traveler is unable to submit a report, they can upload it later using a milepost close to the location of the animal. The state authorities also warn people against picking up roadkill because experienced employees will take care of it if they receive a report.

“For years, wildlife carcass data has been a key factor in UDOT and DWR’s decision-making process to make Utah roads safer and improve wildlife population health,” said UDOT’s Natural Resource Manager Matt Howard. “The new app will make it easier for the public to use and will give us more and better information to guide future mitigation efforts.”

UTAH — While most of the winter season has seen few instances of poor air quality, that cannot be said for the current conditions. Inversion has set in, leaving multiple […]
UTAH STATE・1 DAY AGO
TownLift

WASHINGTON (AP) — Fifteen Native American tribes will get a total of $580 million in federal money this year for water rights settlements, the Biden administration announced Thursday. The money […]
ARIZONA STATE・2 HOURS AGO
TownLift

SACRAMENTO, Calif. (AP) — Competing priorities, outsized demands and the federal government’s retreat from a threatened deadline stymied a deal last summer on how to drastically reduce water use from […]
CALIFORNIA STATE・4 DAYS AGO
TownLift

SALT LAKE CITY — A bill that would change the way law enforcement respond to domestic violence reports passed the Utah Senate yesterday, and will move on to the House. […]
UTAH STATE・4 DAYS AGO
TownLift