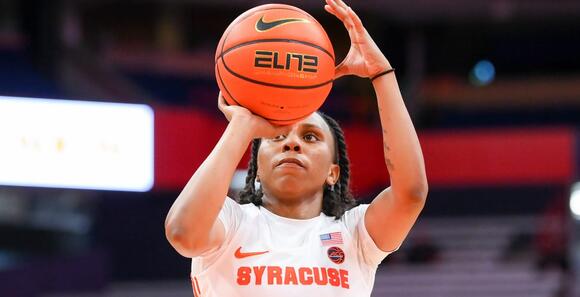 After their closest win of the season to Yale on the road, the Syracuse Women’s Basketball team looks ahead to their game against Coppin State at home on Thursday. The team is currently 6-2 and looks ahead to their next two games before starting conference play on December 18th against Wake Forest.

With two losses to Penn State and Purdue on the road, this team has learned a lot about what it means to play both halves of the game. With the loss against Penn State, they were not able to keep their hot streak going into the second half and against Purdue, they didn’t show up in the first half which made it difficult to make up for it in the second half. These losses and a close win against Yale have been crucial for this team to find their rhythm and learn how to play with grit.

She is teaching this team to “fight for what you think belongs to you and your team”, while utilizing the blue collar mindset that she coaches on. This team is working towards figuring out their identity and “grit is a great word for who [they] are trying to become.”

Heading into the game against Coppin State, Coach Legette-Jack said that they will be trying a bit of a different style and will try to play more full court basketball, which she thinks will help them flow as a team. They are also trying to work on their defense and solidify that as a unit.

“If you can play defense, you can do anything you want offensively as long as you don't throw the ball over the rim. Offense is your freedom but defense is your heart,” Coach Legette-Jack said.

“She is going to get out there and fly around when she plays defense for us, it’s contagious,” Coach Legette-Jack said.

Coach Legette-Jack also talked about their three P’s, Purpose, Passion, and Pride, that they are working to build their team foundation on. She pushes this team to play for a purpose, play with passion, and have pride when the game is over because they left it all on the court.

Their game against Coppin State is at 7 p.m. Thursday, December 8th at the JMA Wireless Dome. You can watch it as well on ACC Network Extra.

How to Watch Syracuse at Boston College

This year was the start of a new chapter for Syracuse Women's Basketball when it was announced that the new head coach would be former SU player and University of Buffalo head Coach Felisha Legette Jack. Almost halfway through the regular season, one question remains. Will the Syracuse women's ...
SYRACUSE, NY・2 DAYS AGO
AllSyracue