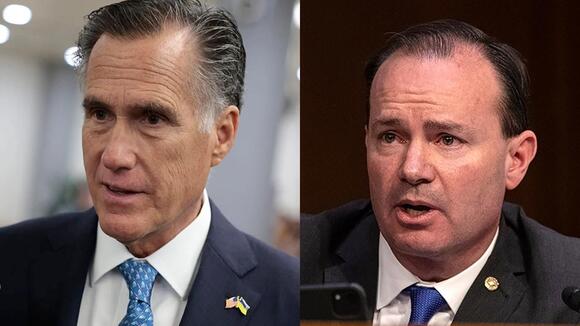 Romney and Lee were the only Republicans to sign onto the letter co-led by Romney and Sen. Michael Bennet (D-CO).

“Utah and the American West is facing an historic drought, and our state’s farmers and ranchers are taking immediate action to be more water-conscious while still maintaining their livelihood,” said Romney. “It’s imperative that USDA programs – including funding – accurately recognize the important role of Utah’s farmers and ranchers in tackling the drought crisis.”

In the letter, the senators called for the USDA’s support saying “The American West is in crisis.”

“Across the major basins of the American West – including the Colorado River Basin, The Rio Grande Basin, the Great Basin, the Scramento-San Joaquin River Basin, the Columbia River Basin, and the Arkansas-White-Red Basin – farm and ranch families hang in the balance as they grapple with a 22-year mega-drought,” the senators wrote.

The letter continued by saying the shortage of water is a threat to productive farmland across western states which are “both a pillar of our rural economies and drivers of America’s food production.”

In order to help combat the drought, the two Republican and 14 Democratic senators urged the USDA to support Western farmers and ranchers with existing programs, new funding, and tailored solutions to conserve water. This included improving water infrastructure and efficiency, providing technical assistance, and providing additional resources as “many existing programs do not translate well to the needs of Western agriculture.”

The senators also called on USDA to address staffing shortages at field offices across the west. According to the senators, the lack of experts and engineers at the Natural Resource Conservation Service and Farm Service Agency has delayed many projects regarding Western water conservation.

The Gateway says goodbye to 2022 with ‘Last Hurrah’

The letter urged the USDA to equally allocate funds from the $20 billion provided by Congress in the Inflation Reduction Act across the country to “reflect the contribution of every region, including the West.”

well that's what happens when you expedite building permits during a drought. Washington county utah has tripled in size in 8 years.

Farming in a desert is what caused the drought. Now you politicians want protections and money for the overuse of agriculture water?

A photo of Gabby Petito recently released to the public shows cuts and smeared blood on her face reportedly indicating that she was grabbed over her face potentially blocking her airways before meeting with Moab Police, Parker & McConkie law firm reports.
MOAB, UT・17 HOURS AGO
ABC4

A Taylorsville man has been arrested and charged in a federal criminal complaint for allegedly distributing fentanyl to an undercover FBI agent, according to the United States District Court of Utah.
TAYLORSVILLE, UT・4 DAYS AGO
ABC4

Two men have been arrested today in connection with a fatal shooting at a townhouse complex in Glendale Wednesday, according to authorities.
SALT LAKE CITY, UT・5 DAYS AGO
Toni Koraza

Photo byPhoto 122725292 © Joe Tabb | Dreamstime.com. DeSantis is keeping his 2024 plans quiet, while Trump loses no time to coming after DeSantis. Former President Donald Trump intensified the tension between him and Ron DeSantis when he shared a video of the Florida governor on his Truth Social page.
FLORIDA STATE・2 DAYS AGO
Vice

GOP Megadonors Are Coming for Trump

Two of the biggest-spending groups of Republican megadonors are making it clear that they don’t want Donald Trump to be the GOP nominee, a sign that anti-Trump candidates will be well-funded in the 2024 presidential primaries. The Koch network, the largest-spending political network on the right, and The Club...
INDIANA STATE・20 HOURS AGO
The Hill

For nearly two years, Sarah Huckabee Sanders served as the voice of the Trump administration. On Tuesday night, the now-Arkansas governor will serve as the voice of the entire Republican Party, giving its official response to President Biden’s State of the Union address. Sanders, who left her position as White House press secretary in July…
ARKANSAS STATE・1 DAY AGO
ABC4

Throwing stars are currently illegal in Indiana, but the bill would lift that ban for recreational use.
INDIANA STATE・2 DAYS AGO
ABC4

On Thursday morning, Feb. 2, Lisa Lyn Bangerter, 59, was arrested and faces charges of operating an alleged crack house in Hollday after she was served a search warrant. The Unified Police Department
HOLLADAY, UT・4 DAYS AGO
ABC4

Search redirected after no signs of missing man in Garfield County

Man rides motorcycle off a Utah cliff, smartwatch saves him

A motorcyclist fell 40-50 feet off a cliff and was found by authorities after his smartwatch sent a crash alert, according to the Washington County Sheriff's Office.
WASHINGTON COUNTY, UT・2 DAYS AGO
ABC4

The Salt Lake City Police Department is asking the public for help in identifying two men wanted in connection with the deadly stabbing on Thursday, Feb. 2.
SALT LAKE CITY, UT・4 DAYS AGO
ABC4

The United Police Department is searching for Rich Esser, believed to have been missing since yesterday evening.
MILLCREEK, UT・5 DAYS AGO
ABC4

For the past several months, detectives have been investigating a drug trafficking organization operating in Utah and Salt Lake Counties, according to the Utah County Major Crimes Task Force. Seven have been arrested in the investigation.
SALT LAKE COUNTY, UT・1 DAY AGO
ABC4

Lehi City Police Department asked for help in identifying two individuals involved in an alleged vehicle burglary. They have been searching for the alleged burglars since January, and are asking the public for help.
LEHI, UT・11 HOURS AGO
ABC4

Search and Rescue have located and stabilized the woman struck by a snowmobile near Peter Sinks in Logan Canyon.
LOGAN, UT・3 DAYS AGO
ABC4

President Biden said on Saturday that he had ordered the military to down the balloon “as soon as possible” after he was briefed on the matter on Wednesday.
UTAH STATE・2 DAYS AGO
ABC4

Two snowmobilers lost in the Yankee Meadow area were rescued in the middle of the night on Feb. 7 after getting lost in the darkness and the fog, Iron County Search and Rescue (ICSSAR) reported.
IRON COUNTY, UT・11 HOURS AGO