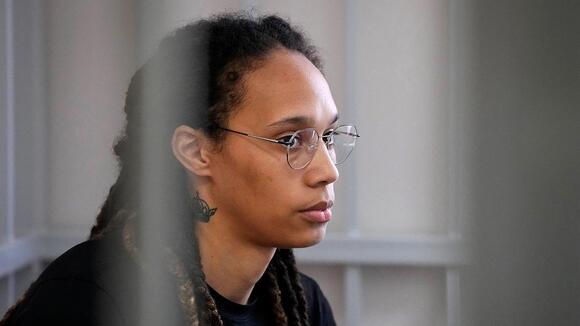 “This was not a situation where we had a choice of which American to bring home. It was a choice between bringing home one particular American, Brittney Griner, or bringing home none,” the official said, speaking on a call with reporters shortly after Griner’s release was made public.

“In recent days, we were able to reach agreement on an option to secure Brittney’s release. President Biden made a difficult decision to accept that option. It resulted in the safe return home of an American. That is always our goal, get wrongfully detained Americans home safely, then keep working for the return of others,” the official said.

Whelan, a former U.S. Marine, has spent four years behind Russian bars and was sentenced to 16 years in prison following a conviction on espionage charges in 2020. The U.S. has determined Whelan’s detention to be unlawful and criticized the Russian criminal allegations and court process as a sham.

His family said last week he was transferred to a Russian prison hospital.

The official said the Russians are holding Whelan’s release to a higher bar than Griner’s because of the espionage charges.

“We as a government have sought to bring Paul Whelan home as well. We did so in good faith with the Russians and proposed multiple different options. Regrettably due to the nature of the sham espionage charges Russia levied against Paul, the Russians have treated, continue to treat, his situation differently from Brittney’s and rejected each and every one of our proposals for his release.”

“The president has made clear to the Whelan family that when they are ready, he is eager to personally convey his commitment to Paul’s case and its resolution and keep them informed of our efforts,” the senior official said.

David Whelan, Paul Whelan’s brother, said in a statement that the Biden administration’s early warning to their family allowed them to “mentally prepare for what is now a public disappointment for us,” but said securing Griner’s release was the “right decision.”

“It is so important to me that it is clear that we do not begrudge Ms. Griner her freedom,” he said in the statement, according to NBC news. “As I have often remarked, Brittney’s and Paul’s cases were never really intertwined. It has always been a strong possibility that one might be freed without the other.”

Griner, who was playing professional basketball in Russia, was detained at the airport in Moscow in early February over what the Russians said was the illegal possession of a vaping device with hashish oil. She was sentenced to nine years in prison. Her arrest occurred amid heightened tensions between the U.S. and Russia as America sought to prevent Russian President Vladimir Putin from launching an invasion of Ukraine that same month.

Biden announced Griner’s release in remarks from the White House early Thursday, saying he was able to speak by phone to the athlete, joined by her wife, Cherelle Griner, as well as Vice President Harris and Secretary of State Antony Blinken.

The senior administration official, briefing reporters, provided more details on Griner’s release, which was done in coordination with the United Arab Emirates.

Griner was met on a tarmac in the United Arab Emirates by the State Department’s special presidential envoy for hostage affairs, Roger Carstens, who was accompanying her back to the U.S. on behalf of the president and Blinken.

The official said that Griner will receive an offer from the government for a support program that aims to help those returning home from being held hostage or wrongfully detained, deal with what they have been through and transition back into normal life.

The official added the administration is interested in hearing of Griner’s experience in a Russian penal colony, for information that would better help them address others.

“We of course are eager to learn, it helps us as we deal with these types of cases, I can only begin to imagine some of what it must be like to be an American held in a Russian penal colony, but she’s actually experienced it, and if and when she’s comfortable sharing that, we have a lot to learn, I’m sure, from her, with respect to racism, with respect to whatever else she might have subjected to and her condition … she should never have been subjected to in the first place.”

The administration did not confirm a statement by the United Arab Emirates and Saudi Arabia that Crown Prince Mohammed bin Salman co-led the mediation with the Russians to secure Griner’s release.

U.S. and Saudi relations are tense on a number of fronts, ranging from Riyadh’s rejection of American requests to keep oil prices low and Biden’s tightrope walk between characterizing Crown Prince Mohammed and the kingdom as a pariah over the 2018 killing of U.S.-based journalist Jamal Khashoggi and long-held security ties between the U.S. and Saudi.

“We do engage with a wide range of countries so that the Russians hear from a wide range of sources” about U.S. commitments to freeing detained Americans, the official said in response to a question over the Saudis’ role in the prisoner swap.

“I’ll leave the details of that out,” the official said.

This help line is a growing effort to give Ukraine vital advice on repairs and maintenance as it pushes weapons to their limits.
WASHINGTON STATE・1 DAY AGO
Matthew C. Woodruff

Almost 30,000 people have signed a petition calling for evangelical pastor Franklin Graham to be fired for his support of former President Trump following the deadly Capitol riot. The petition was drawn up by the Christian organization Faith America, which criticizes Graham’s “idolatry” of the former president.
2 DAYS AGO
Eden Reports

In a recent speech, President Joe Biden stated that he had added more to the national debt of the United States than any other president in history, saying, "No President added more to the debt in 4 years than my President… I misspoke - 25% of our country’s entire debt."
2 DAYS AGO
The Hill

There has been substantial media coverage of President Biden and former Vice President Pence both removing marked classified documents outside the White House after they left the vice presidency (and, in the case of Biden, also including after he was a U.S. senator). Both insist they did so inadvertently.   Of course, the word “inadvertent” does not apply to former President Trump’s behavior. As we now know from Mr. Trump’s own admission, he knew documents he took to Mar-a-Lago were classified…
WASHINGTON STATE・1 DAY AGO
Newsweek

The video sparked discussions on social media about what kind of weapon could be responsible for the attack.
7 HOURS AGO
TheDailyBeast

Former President Donald Trump appears to have lied in sworn court records, opening him up to severe sanctions by a New York judge who has already lost his patience and threatened to punish him before.Trump claimed he wasn’t the president of the Trump Organization during his four years at the White House, despite previously testifying that he was an “inactive president.” And he claimed that he didn’t have a financial stake in a partnership with the real estate company Vornado, even though he previously testified that he did.On Tuesday, the New York Attorney General’s Office asked Justice Arthur F. Engoron...
NEW YORK CITY, NY・7 HOURS AGO
Newsweek

"There is no other way to talk to these fools," State Duma member and former military commander Andrey Gurulyov said.
1 DAY AGO
msn.com

Three months after it got wrecked trying and failing to punch through Ukrainian defenses, the Russian navy’s unhappiest marine brigade is back in action. And apparently getting beaten, again. The bewildering and tragic plight of the 155th Marine Brigade is a reminder of one of the fundamental flaws in...
23 HOURS AGO
MsBirgith

A recent NBC poll revealed that 71% of Americans believe the country is headed in the wrong direction. This is a significant increase from previous polls and suggests a growing sense of unease among the American public.
1 DAY AGO
KCAU 9 News

The Republican Governors Association (RGA) called on the Biden administration to delay implementation of the revised Waters of the United States (WOTUS) rule until the Supreme Court rules this summer in a case pertaining to the Clean Water Act (CWA). In a letter, RGA members argued implementing the most recent revision would create new bureaucratic […]
1 DAY AGO
KCAU 9 News

The parents of Tyre Nichols, the 29-year-old who died after being beaten by Memphis police during a traffic stop, have accepted an invitation to President Biden’s State of the Union address next month. Police footage released Friday showed a group of officers pepper-spraying, using a stun gun on, punching and kicking Nichols, while others at […]
MEMPHIS, TN・1 DAY AGO