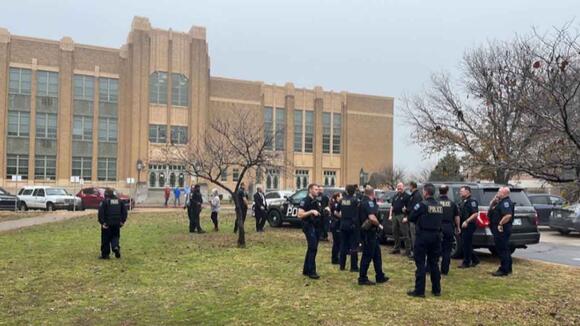 The FBI issued a statement Thursday afternoon after false 911 calls were sent Thursday to at least nine schools around Oklahoma.

The FBI is aware of the numerous swatting incidents across the state of Oklahoma and the nation wherein a report of an active shooter at a school is made. We are working alongside our law enforcement partners in identifying the source of the hoax threats. Due to the ongoing status of the investigation, we are unable to provide more details. However, it is important to note that law enforcement will use all available resources to investigate a school threat until we determine whether it is real or not. Investigating hoax threats drains law enforcement resources and diverts us from responding to an actual crisis. Hoax threats can shut down schools, cause undue stress and fear to the public, and cost taxpayers money.

We urge the public to remain vigilant, and report any and all suspicious activity and/or individuals to law enforcement immediately.

Authorities in Stillwater also confirmed that a false call was placed in reference to an active shooter at Stillwater Junior High School. It has been confirmed by officials that there is no threat to students.

Stillwater police have provided the audio from the 911 call.

On Thursday, Dec. 8, 2022, at approximately 10:16 a.m., Stillwater Police Department (SPD) received a call of an active shooter situation at the Stillwater Junior High. An SPD School Resource Officer was on-site during the initial call and confirmed that there was no active shooter at the school. Chief Watts diverted officers to respond to other schools in the area in case of a “swatting call.” Officers from several agencies responded to assist, and with the help of school administration, staff and faculty, we were able to secure the other sites. We have been made aware of similar threats to other school districts in Oklahoma. We appreciate the Oklahoma Highway Patrol, Oklahoma State University Police Department, and Payne County Sheriff’s Office for their assistance.

“We take all threats of violence against our schools seriously. I am very proud of the coordinated response from the Stillwater Police Department and our partnering agencies. We remain vigilant and prepared to respond to any incidents that threaten the safety of our community, said Chief Watts.”

According to Oklahoma Highway Patrol (OHP) Troopers, a false call was placed to a school in Perry on Thursday morning. Enid Police also say that officers responded to a false threat that was made at Enid High School. According to police, no real threat has been identified. Police say all students on the Enid campus are safe and the school is in lockdown. Durant Public Schools said that its sites are on lockdown as police investigate a hoax call that targeted its school.

Police in Medford also said they responded to an active shooter threat located at Medford Public School , but that there was no danger. In Miami, police said they received a bogus active shooter call this morning for Miami Junior High School . Similarly, Ardmore Police say they received a hoax call targeting Ardmore High School . Dickson High School in Ardmore also conducted a safety search though district leaders say a threat was not made to the school.

Currently, it is unclear who placed the call or if these events are connected.

This is a breaking news story, stay with News On 6 for the latest updates.

Several Sheriff's offices across Oklahoma have said they refuse to enforce a new gun rule from the ATF. The new rule would require anyone who uses a "pistol brace" to register it with the federal government. Sheriffs are calling it an attack on the 2nd Amendment and something they will...
OKLAHOMA STATE・3 DAYS AGO
News On 6 KOTV - Tulsa

Six months after the Rogers County Sheriff's Department received funding for body cameras, a woman is upset they're not installed yet after her son was pulled over. In August, the Rogers County Sheriff's Office received funding for 70 new body cameras and 27 new dash cameras. The cameras haven’t arrived...
ROGERS COUNTY, OK・17 HOURS AGO
News On 6 KOTV - Tulsa

Tulsa Police said officers arrested a man after finding a loaded AR-type gun in his car, while he was smoking marijuana. Officers say they were near 41st and Memorial Friday night when someone told them a man was smoking marijuana in a car nearby. Police say they found Nicari Owens...
TULSA, OK・1 DAY AGO
News On 6 KOTV - Tulsa

A man convicted of helping the man who murdered Tulsa Police Sergeant Craig Johnson has had one of his convictions dismissed. David Ware shot and killed Sgt. Craig Johnson and injured officer Aurash Zarkeshan in 2020. Matthew Hall drove Ware away from the scene and then dumped the gun that...
TULSA, OK・3 DAYS AGO
News On 6 KOTV - Tulsa

Highway 75 Closed Starting At Peoria Due To Road Conditions, Crashes

Tulsa Police and the Oklahoma Highway Patrol are closing Highway 75 from Peoria on south due to crashes caused by the road conditions. Officers and troopers along with the Tulsa Fire Department are working several crashes. Police have advised their officers not working the crashes to stay out of the...
TULSA, OK・20 HOURS AGO
News On 6 KOTV - Tulsa

The Tulsa Fire Department says two firefighters suffered no life-threatening injuries after being hit by a car on Highway 75 Sunday night. In a social post, TFD said a vehicle approaching the scene of a crash near 1100 southbound on Highway 75 lost control and crashed into the original car the firefighters were working on.
TULSA, OK・18 HOURS AGO
News On 6 KOTV - Tulsa

Tulsa Police said a man is in custody after a pursuit that ended in a fiery crash near a casino on Saturday. The chase happened after police were called to investigate a domestic assault at around 2 p.m., according to Sgt. J.P. Ward with TPD. Sgt. Ward said the female...
TULSA, OK・1 DAY AGO
News On 6 KOTV - Tulsa

The Oklahoma Highway Patrol says a person is in custody on Friday accused of leading troopers on an early morning chase that ended in Tulsa. According to troopers, the pursuit started north of Glenpool before the driver got onto Highway 75, eventually reaching speeds of around 100 MPH. Troopers say...
TULSA, OK・3 DAYS AGO
News On 6 KOTV - Tulsa

Every school in Rogers County now has a School Resource Officer. Deputy Sheldon Morgan at Inola Public Schools said his job involves more than just keeping kids safe. It’s about being a resource for them and someone they feel comfortable talking to. Morgan is a Rogers County Deputy in...
ROGERS COUNTY, OK・3 DAYS AGO
News On 6 KOTV - Tulsa

Tulsa's 'Rosie the Riveter,' 100, Remembered As Generous With 'Infectious Energy'

The woman known as Tulsa's Rosie the Riveter has passed away. Marina Metevelis lived to be 100 and will be laid to rest on Friday. Instead of flowers, the family asks that people consider making a donation to Holy Trinity Greek Orthodox Church or to the VFW post downtown, where Metevelis rarely missed an event, and touched so many lives.
TULSA, OK・3 DAYS AGO
News On 6 KOTV - Tulsa

More than 20 people are now graduates of the latest Tulsa County drug court class. The program is designed to put offenders dealing with drug and alcohol abuse on a path towards sobriety and become active members of society. Jeffery Holden battled drug use for years but is now sober...
TULSA COUNTY, OK・2 DAYS AGO
News On 6 KOTV - Tulsa

A sleet storm has caused some slick spots to appear on roads in Oklahoma Monday. Meteorologist Stephen Nehrenz has an update on the winter weather and the road conditions from the Bob Mills Weather Center. Much of Oklahoma is under a Winter Storm Warning until 6 p.m. Monday. Delaware, Okfuskee,...
OKLAHOMA STATE・6 HOURS AGO
News On 6 KOTV - Tulsa

Officers seized 74 pounds of meth while executing a search warrant this week, Tulsa Police said. Officers shared photos from the bust with us. Police said officers also recovered more than a pound of fentanyl. However, police said they cannot provide any details on the ongoing investigation at this time.
TULSA, OK・2 DAYS AGO
News On 6 KOTV - Tulsa

A funeral procession will be held on Friday morning for a Tulsa Police officer who died after a battle with cancer. Tulsa Police Officer William Hays passed away on Tuesday, January 24. The department says Hays was diagnosed with stage 4 cancer in late 2021. According to the Police department,...
TULSA, OK・3 DAYS AGO
News On 6 KOTV - Tulsa

The first round of sleet in Central Oklahoma is winding down as of 2 p.m. The precipitation chances will increase later and sleet will still cover roads, but they should improve once road crews start plowing again. Some heavy sleet and occasional thundersleet will continue to add up, according to...
TULSA COUNTY, OK・3 HOURS AGO
News On 6 KOTV - Tulsa

An 18 year-old was killed in a crash early Saturday morning in Tulsa County according to the Oklahoma Highway Patrol. Troopers said the crash happened around 1:47 a.m. near East 104 Street and South Elwood Avenue. Vladislav Soden, 18, was pronounced dead at the scene, according to OHP. What happened...
TULSA COUNTY, OK・2 DAYS AGO
News On 6 KOTV - Tulsa

Just a month after the Sapulpa Christmas Chute, city leaders say they’re looking forward to bringing more attractions to downtown Sapulpa. Sapulpa's downtown master plan has been in the works for the last couple of years and the community will soon start seeing the changes it will bring. People...
SAPULPA, OK・17 HOURS AGO
News On 6 KOTV - Tulsa

TULSA, Okla. - Winter weather returns to Green Country on Monday. Here are the details from News On 6 Meteorologist Alan Crone:. The shallow arctic air will remain entrenched across the state through at least Wednesday before attempting to modify Thursday into the weekend. This pattern will bring several waves of wintry precipitation across the area resulting in highly varied types of wintry precipitation depending upon your exact location. A general overview supports more sleet and snow across the northern sections with a mixture of sleet and freezing rain across the southern areas. The deepest cold air will support snow and sleet, with the shallowest air supporting freezing rain. As of this morning, higher chances for more impactful freezing rain chances will remain south of I-40 with higher chances along the Red River Valley into north central Texas. Most data currently place this slightly south of the McAlester region. Regardless, I'll encourage you to remain alert to rapidly changing winter weather conditions as several disturbances move across the area. Even freezing drizzle can cause extremely dangerous travel conditions in these patterns.
TULSA, OK・10 HOURS AGO
News On 6 KOTV - Tulsa

A woman who was wanted in connection to the death of a Pryor man has been arrested, authorities said. Katelyn Young has been charged with First Degree Murder for the death of Aaron Jenks. Jenks was found dead in his home after overdosing on fentanyl pills in 2021. Pryor Creek...
TULSA, OK・3 DAYS AGO