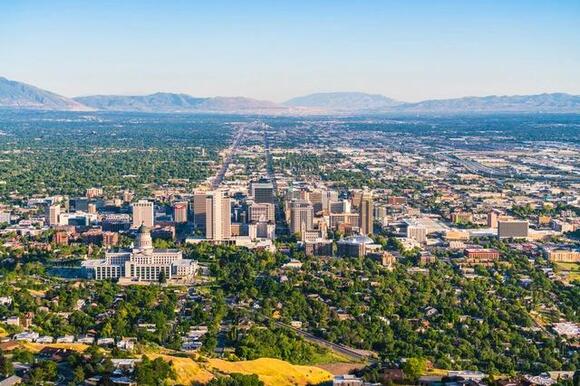 SALT LAKE CITY, Utah ( ABC4 ) – The great outdoors, a budding nightlife, quaint cafés; Salt Lake City is exploding with culture. For this reason and more, the capital city of Utah was recently recognized as one of the greatest cities in the world by Resonance Consultancy in their World’s Best Cities report , ranking at No. 87.

Utah ranked a top state for the ‘American Dream’

“Combining spectacular natural and built environments, Salt Lake City is no longer just a gateway to the great outdoors, it’s also a welcoming destination with ascendant culture, new museums, and local breweries, which over the past two years have multiplied once the local potency limits were relaxed,” writes Resonance in their report.

According to Resonance’s metrics, Salt Lake City ranked No. 9 globally for its Employment Rate and No. 18 for its GDP per Capita, bringing its overall Prosperity ranking to #31 worldwide.

Resonance attributed Salt Lake City’s rise to the 2002 Olympic Winter Games, saying, “SLC continues to pour millions into development projects and the beautification of its downtown, and the city has matured into an urban experience as much as an outdoor one.”

More than just the growing downtown environment, Salt Lake City earned points for the proximity to the Wasatch Mountain Range, with “stunning canyons and 11,000-ft peaks” giving adrenaline junkies a reason to travel and stay.

Bringing work, relaxation, and wine all to one location

Salt Lake City, Utah (Good Things Utah) — Katy was able to take us on an adventure downtown today to visit Casot a Salt Lake City Wine and cocktail bar and workspace located at 15th & 15th. The translation of Casot is shed or hut. This makes perfect sense when you look at the idea […]
SALT LAKE CITY, UT・1 DAY AGO
ABC4

Provo Towne Centre to be renovated with new Target location

Target will soon have another location in Provo, as the national retailer will be making a new home at the Provo Towne Centre as part of an ongoing redevelopment of the center and surrounding area.
PROVO, UT・5 HOURS AGO
ABC4

Utah Jazz fans who also love the delightful taste of Oreo have a new way to celebrate their favorite things in life with a limited edition Utah Jazz-themed Oreo.
SALT LAKE CITY, UT・3 HOURS AGO
ABC4

If you are a woman planning to serve a mission for The Church of Jesus Christ of Latter-Day Saints, the Utah Women and Leadership Project reports positive effects.
PROVO, UT・19 HOURS AGO
ABC4

The Salt Lake Chamber is one of many advocacy groups tracking the legislative session.
SALT LAKE CITY, UT・2 DAYS AGO
ABC4

One dead in US-40 crash north of Heber City

A four-vehicle crash on US-40 has left one person dead Tuesday, Feb. 7, according to Utah Highway Patrol.
HEBER CITY, UT・5 HOURS AGO
ABC4

January manages much moisture and mounds of snow

As we finally shed January and move on to February in Utah, it's time to take a quick look back and see just what type of month we had.
SALT LAKE CITY, UT・5 DAYS AGO
ABC4

Stay inside: Air quality worsening across Northern Utah due to inversion

While we're hoping that coming weekend winds may blow the valley clean, the Utah Department of Environmental Quality is noting that air quality is edging into "unhealthy" territory this week.
UTAH STATE・4 DAYS AGO
ABC4

Happy weekend, Utah! We've been battling bad air for the last several days, and our inversion doesn't budge for the first part of our weekend.
CACHE COUNTY, UT・3 DAYS AGO
ABC4

Sandy officials donated surplus equipment from the city's fire department on Wednesday, Feb. 1, to help a community in central Mexico that is in need of emergency gear.
SANDY, UT・5 DAYS AGO
ABC4

A herd of elk near the I-80 and I-215 interchange was on the move again this morning. Three more elk were hit by vehicles traveling on the freeway, prompting a reminder from Utah Highway Patrol to watch out for them when traveling in that area.
SALT LAKE CITY, UT・4 DAYS AGO