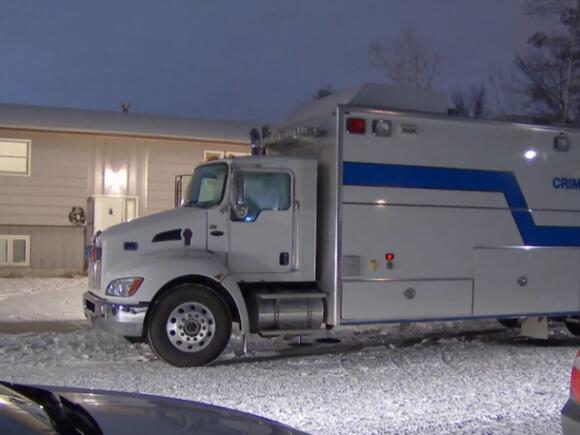 BILLINGS - A woman told an officer she killed a man inside his South Side Billings home as part of an "initiation that the detective would not understand."

Court documents state the woman, Nina Mel Cochran, also said "she had been born to become Lucifer and rule over the earth."

Cochran, 32, has been charged with deliberate homicide for the death of a 64-year-old man. The man's body was discovered by police in a residence on Hillview Lane after Cochran was arrested in Park County and allegedly confessed to murdering a man in Billings.

Cochran has yet to be arraigned in Yellowstone County on the murder charge.

According to charging documents, Cochran was initially arrested in Park County on Dec. 1 by a Montana Highway Patrol trooper who responded to a report of a reckless driver on Interstate 90. The trooper said he attempted to stop a 2005 Chevrolet Trailblazer, but the driver fled until the vehicle was stopped by tire spikes near Big Timber. Cochran was arrested on several charges, including felony criminal endangerment, court records state.

The vehicle Cochran was driving belonged to Nielsen, and attempts to contact him were unsuccessful, court records state. An agent of the Montana Division of Criminal Investigation visited the Billings residence to attempt to make contact with Nielsen, but no one answered and the door was locked. A neighbor told the agent he typically saw Nielsen daily but had not seen him for several days.

Cochran was then interviewed by an officer in the Park County Detention Center on dec. 6. Court records state she waived her rights and agreed to speak with the officer. It was during that interview Cochran allegedly said Nielsen was "in his house dead" and that she had killed him as part of a satanic initiation. She also allegedly gave the officer Nielsen's address and said she left the house after the ritual to go do "some driving," court records state.

Following the interview, the officer contacted the Billings Police Department and requested a welfare check at Nielsen's residence. Billings police reported officers went to the residence and found Nielsen's body in the living room on a couch.

Glad people are finally being honest that this crap does exist even in Montana. You’ll never stop researching if you start looking this stuff up

A man accused of a Jan. 8 crime spree in Billings that left one man dead, another man seriously injured and numerous vehicles damaged or destroyed was arraigned Friday.
BILLINGS, MT・15 HOURS AGO
Q2 News

Details of the harrowing crime were released Thursday in court records charging a 32-year-old man with not only shooting two people but then attempting to rape one of the victims.
BILLINGS, MT・1 DAY AGO
Q2 News

“All of sudden it was this big explosion in the sky and all this debris started slowly coming down like it was big smoke," she said.
BILLINGS, MT・5 HOURS AGO
Q2 News

Dolly Moore wrote on Twitter that she saw a jet go by and then heard what she described as an explosion in the sky.
BILLINGS, MT・8 HOURS AGO
Q2 News

Details were thin, but Yellowstone County Sheriff Mike Linder confirmed at 7:30 p.m. that at least one person had been shot.
BILLINGS, MT・4 DAYS AGO
Q2 News

Police tactics and use of force are under national scrutiny again, following the death of Tyre Nichols, 29, who was beaten by five police officers now charged with murder in Memphis, Tenn.
HARDIN, MT・3 DAYS AGO
Q2 News

Tony Seitz started crafting unique beehive boxes after taking up beekeeping with his son. He has been retired since 2009 and enjoys creating the colorful boxes as a hobby.
BILLINGS, MT・2 DAYS AGO
Q2 News

The Montana Women’s Run began in 1982 with 200 registrants and celebrated last year with over 4,600 women participating virtually around the world.
BILLINGS, MT・1 DAY AGO
Q2 News

The Pentagon confirms a strange object spotted in the sky over Billings on Wednesday was a Chinese spy balloon. The balloon had apparently been over the northern U.S. for the past several days.
MONTANA STATE・1 DAY AGO
Q2 News

The Veazey family suffered the loss of their daughter on New Year's Day. The mother, Morgan Veazey, is now wanting to give back to the hospital that helped them through the difficult time.
BILLINGS, MT・3 DAYS AGO
Q2 News

Gene John Klamert, 70, pleaded guilty to mail fraud. He faces a maximum of 20 years in prison, a $250,000 fine and three years of supervised release.
BILLINGS, MT・8 DAYS AGO
Q2 News

Noticing the decapitated Joseph on her apartment building’s fire escape, with the help of family and some other residents, they recovered his body.
BILLINGS, MT・8 DAYS AGO
Q2 News

Dolly Moore wrote on Twitter that she saw a jet go by and then heard what she described as an explosion in the sky.
BILLINGS, MT・8 HOURS AGO
Q2 News

NBC News reported the balloon flew over the Aleutian Islands, through Canada, and over Montana. Several people in the Billings area reported seeing the object in the sky Tuesday.
BILLINGS, MT・1 DAY AGO
Q2 News

“I had posted a couple of photos just to social media, just joking, like I thought I saw a UFO,” Doak said.
BILLINGS, MT・8 HOURS AGO
Q2 News

On July 15, a massive dust storm swept across I-90 near Hardin, causing blackout conditions and a 21-vehicle pile-up, which killed six people, including two children.
HARDIN, MT・10 DAYS AGO
Q2 News

Parents in west Billings and south of Billings are looking into the possibility of building a new high school.
BILLINGS, MT・2 DAYS AGO