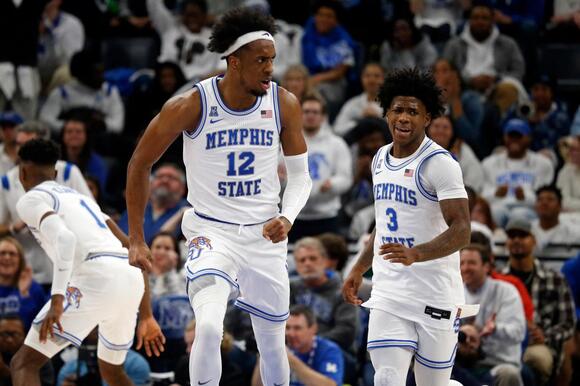 What makes Auburn basketball so good, according to Memphis coach Penny Hardaway , is its toughness.

“Any Bruce Pearl team you’re gonna face, you know it’s gonna be about physicality, toughness and defense,” Hardaway said Thursday. “So, you have to outlast them at the physicality game. Play as hard as you can, because they’re relentless. They’re gonna keep coming at you.”

The Tigers (7-2) will find out whether they’re tougher than Auburn (8-0) at State Farm Arena in Atlanta on Saturday (4 p.m., ESPN2). The neutral-site game is part of the Holiday Hoopsgiving event, the same one Memphis and Auburn participated in two years ago when they met on the same floor. Auburn won that matchup 74-71.

“They’re really good in transition,” Hardaway said of Auburn. “Another thing, they overplay the passing lanes, so we have to be patient. They’re gonna get out in the passing lanes and play very aggressive. So, those two things worry me a little bit. If we’re patient and we get back in transition, we can have success in some areas.”

If the Tigers are to be successful Saturday against Auburn, they’ll likely need Davis.

The preseason All-American is going through a rough patch offensively. In his last four games, Davis is 16-for-58 shooting (27.5%). In a win against Little Rock earlier this week, he had his worst game in a Memphis uniform. He scored eight points but was just 3-of-15 from the floor and failed to make a 3-pointer for the first time since transferring from SMU in the offseason.

Davis also saw his frustration with Little Rock’s D.J. Smith boil over. In the second half, he was called for a flagrant-2 personal foul, resulting in an automatic ejection, for pushing Smith then lightly head-butting him. Although he was ejected, the incident did not rise to a level that would keep him from playing against Auburn.

“I’m not worried about him at all. He has a huge heart and he’s gonna figure it out,” he said.

Alex Lomax, who is averaging 13.3 points, 4.3 assists and 4.3 steals over his last four games, went through a slump earlier this season. He said he has offered Davis some advice.

“I just tell him, ‘Man, whatever you do is cool,’” said Lomax. “’We know the work you’re putting in. We know the history of what you’ve done on the basketball court and what you’re capable of doing. Just keep doing you. Don’t change and you’re gonna find yourself.’

“I don’t really think he’s lost himself, anyway, but the shots are gonna fall.”

The waiting, it’s been said, is the hardest part.

Memphis basketball remains in a holding pattern as it pertains to the eligibility status of transfer guard Damaria Franklin. But Hardaway still expects a ruling from the NCAA on Franklin’s mental health waiver request sooner rather than later. He remains optimistic.

“We’re hoping to figure something out before we leave – hopefully,” he said Thursday morning. “Now, it’s in the NCAA’s hands to vote. We’re waiting on the vote.”

Hardaway added his outlook does not stem from any intel from anyone at the NCAA.

“They haven’t given us an actual day,” he said.

Even though Young (6-foot-10, 233) is a first-time transfer, having spent his first four seasons at SMU, he missed the May 1 deadline for immediate eligibility. Even first-time transfers must enter the portal by May 1. Because Young placed his name in the portal in early August, he must apply for a waiver or sit out the entire season.

Young, who averaged 2.0 points, 1.7 rebounds and 0.5 blocks a game at SMU last season, told The Commercial Appeal last week that he had not yet applied for a waiver. He added he and the program were in the process of gathering materials to submit a mental health waiver request.

Even if Young does not get on the court this season, he has one more year of eligibility remaining.

This article originally appeared on Memphis Commercial Appeal: What worries Memphis' Penny Hardaway entering Auburn game — and why it's not Kendric Davis