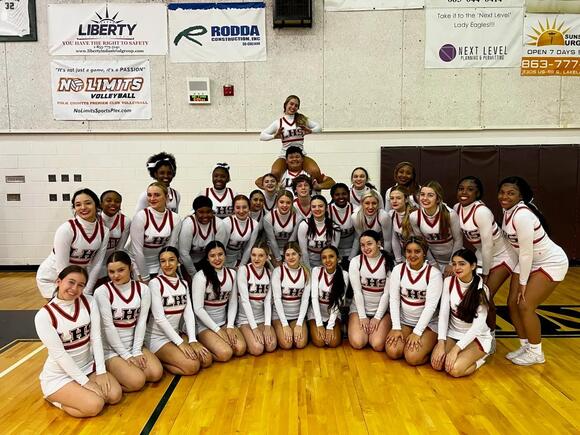 After about two months since the cheer season has been going on, Lakeland head cheer coach Crystal Abdon knew her team needed to tighten up some loose ends at the Polk County Cheerleading Invitational heading into regional and eventually state.

Last year Lakeland won a state title in the Class 2A Large Non-Tumbling Division and went on to graduate nine seniors; the Dreadnaughts with those seniors won four consecutive state titles. This year is a new group that comprises 34 student-athletes –- a young team overall -- which is the largest in the county.

And because of the amount of cheer athletes on the team, Lakeland couldn’t compete against any other team because no other squad in the county has that many student-athletes. So, while it is a tall task to evaluate the cheer team against other competition at George Jenkins High School on Wednesday, Abdon said her team did incrementally improve ahead of regionals and state –- two competitions Lakeland will have the opportunities to compete against other teams.

Lakeland is led by seniors Destinee Grimes and Rorie Aycock. Both Grimes and Aycock lead by example in the practice room and on the mat. Both are in the majority of the routines in all areas, including the pyramid and the stunts and cheer.

“Overall, I was impressed with their performance. They seem to be getting better every week,” Abdon said. “We’re attending a competition weekly now, so we felt like tonight we made additional progress since last time.”

Lakeland did well in the execution of its stunts, as well as the overall energy of the routines.

“I think from where we started in the beginning of the season to where we are now, we’ve made huge strides,” Abdon said.

Still, Abdon said it’s all about consistency. Although the overall team acquired the skill set to compete at a high level, it will take a constant pattern of execution over the long hall to come out on top.

Specifically, Abdon noted that the Dreadnaughts need to augment their opening stunts –- the hand-in-hand skill and the ½ up. The 10th-year head coach said those skills can be polished in practice.

The first true competition to see if practice has paid off will be versus five-time national champion Bartow, which is slated for next Friday at Lakeland High School. The team will then get a break extending through Christmas before gearing up in early January for more action.

“Our word is focused. We’re trying to make sure they are focused in the practice room, focused on the details, so that when we go out on the mat and we compete, that the focus is there,” Abdon said.