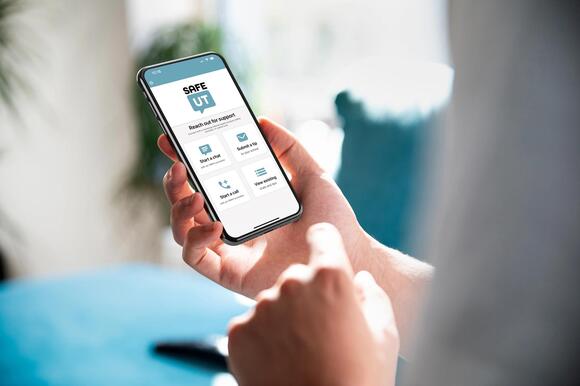 If you or someone you know is struggling with thoughts of suicide, help can be found by calling the National Suicide Prevention Lifeline at 988 or the SafeUT Crisis Chat at 833-372-3388.

SALT LAKE CITY, Utah ( ABC4 ) – The SafeUT app reached a milestone in the last year, reaching over 1 million messages exchanged between mental health counselors and the students, parents/guardians, educators, frontline workers, National Guard members, and families they are there to help.

The Gateway says goodbye to 2022 with ‘Last Hurrah’

In a report released for the last fiscal year, running from the start of July 2021 to the end of June 2022, SafeUT said just under 900,000 Utah students have access to the SafeUT app, leading to an increase in life-saving interventions.

SafeUT’s mental health counselors with the Huntsman Mental Health Institute (HMHI) respond to all incoming chats and calls, 24/7. Once a chat has started, the counselors provide support and crisis counseling, suicide prevention, and referral services. If a user is actively attempting suicide or has plans to harm themselves, the counselors coordinate with first responders for an active rescue.

“SafeUT is far more than an app – it’s a system of care, and it represents the combined vision of the legislature, Utah Attorney General, citizens, parents, and mental health professionals statewide,” said Ric Contrell, chair of the SafeUT commission. “Even with the rise of risk factors, suicide rates have remained relatively flat in Utah over the last year. This is likely due to the increase in supportive mental health services such as SafeUT.”

The rise in users and activity has reportedly had a positive increase in tips as well. SafeUT said it received just over 8,500 tips regarding suicide, bullying, and depression in the last fiscal year. These tips came from students in K-12 and higher education, parents/guardians, and educators and were a substantial increase from just over 6,200 tips received in the previous year.

According to the report, 87% of SafeUT users feel heard with 62.5% going on to seek additional mental health services. According to CDC reports , since a spike in suicides in 2017, Utah suicides have been steadily decreasing year-over-year.

“The SafeUT team has stepped up to the challenge, provided professional solutions, and saved more lives than ever before,” said Contrell.

The ACLU of Utah on the legislative session

The ACLU of Utah is concerned about a series of bills addressing transgender youth and a resolution on court injunctions.
UTAH STATE・23 HOURS AGO
ABC4

Utah is ranked as the second healthiest population in the U.S. following Hawaii.
UTAH STATE・4 DAYS AGO
ABC4

After overnight snow showers, we see showery activity dwindle through Saturday, with another storm system targeting the state on Sunday.
UTAH STATE・1 DAY AGO
ABC4

Advocates are coming together to call on state leaders to invest in programs instead of tax cuts.
UTAH STATE・23 HOURS AGO
ABC4

Utah lawmakers are considering a bill that could help protect victims of domestic violence by mandating new requirements for police responding to these calls.
UTAH STATE・4 DAYS AGO
ABC4

With the near-constant stream of snowstorms coming through our mountains, the numbers keep going up and up.
UTAH STATE・4 DAYS AGO
ABC4

SALT LAKE CITY (ABC4) — Prosecutors are currently working on nine separate cases involving trophy-sized deer and elk being killed illegally in Utah, according to the Division of Wildlife Resources. Per Utah State Code 23-13-2, a “trophy” buck deer has an outside antler measurement of 24 inches or greater while a “trophy” elk is defined […]
UTAH STATE・4 DAYS AGO
ABC4

SALT LAKE CITY (ABC4) – Gov. Spencer Cox recently gave his State of the State address, but it’s obvious he didn’t know that Utah would find itself in such an icy grip after his talk. Since the 19th of January, few locations in the state have made it to normal average temperatures, and it looks like […]
UTAH STATE・5 DAYS AGO
ABC4

We kick off another stretch of active skies in Northern Utah thanks to a series of weather systems moving through our region.
UTAH STATE・3 DAYS AGO
ABC4

We are halfway through the workweek. Last night and early this morning brought snow showers to northern Utah, creating a mess on the roads. With how cold it was, the snow ratios were high meaning we saw light and fluffy snow which helped the system that moved through to overperform.
UTAH STATE・4 DAYS AGO
ABC4

Utah is now seeing some of the coldest temperatures since just before Christmas time.
UTAH STATE・6 DAYS AGO
ABC4

The Great Salt Lake is in danger, and Sen. Nate Blouin (D-Salt Lake) and Rep. Joel Briscoe (D-Salt Lake) unveiled bills Wednesday, Jan. 25 with their plans to save it.
UTAH STATE・4 DAYS AGO
ABC4

A Utah man is facing 11 charges after allegedly causing a multi-car wreck on Interstate 80 that led to the deaths of five Arkansas students on Sunday, Jan. 22.
SHERWOOD, AR・3 DAYS AGO
ABC4

Governor Spencer Cox ordered all U.S. and State of Utah flags to be lowered to half-mast in honor and remembrance of the victims of Saturday's mass shooting in Monterey Park, California.
MONTEREY PARK, CA・6 DAYS AGO
ABC4

A herd of elk caused a little bit of traffic trouble Thursday afternoon when they congregated right next to Interstate 80 and later ran across Foothill Drive.
UTAH STATE・3 DAYS AGO
ABC4

Happy Tuesday Utah! It's going to be another COLD day across the Beehive State with daytime highs that will top out near what we had yesterday.
UTAH STATE・5 DAYS AGO
ABC4

With the resurgence of the blackout challenge on TikTok and the State of Utah’s notice of intent to sue social media companies; we are going to take a deep dive into why Rep. Chris Stewart (R-Utah) is introducing a bill to keep children off social media.
UTAH STATE・6 DAYS AGO