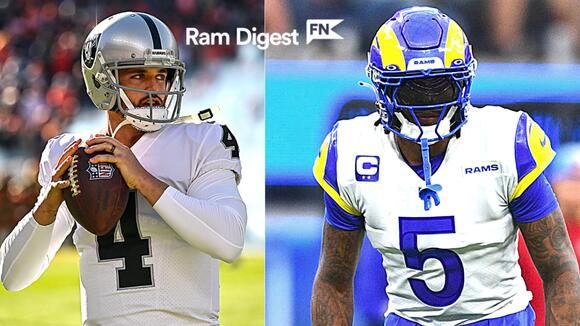 The Las Vegas Raiders visit their old hometown to take on the Los Angeles Rams in a primetime matchup between two teams searching for answers.

The Las Vegas Raiders spent 13 seasons calling Los Angeles home before moving back to Oakland and then, eventually, to greener pastures in the desert.

While they called L.A. home, they created quite a fanbase, a fanbase that still cheers for the silver and black so many years later . After all, it's the Raiders, not the Rams, that brought the city of L.A. its first Super Bowl victory.

“A lot of old Raider fans, they stay Raider fans,” said Rams offensive lineman Coleman Shelton, a Pasadena native born in 1995 during the same summer in which the Raiders left Los Angeles. “They follow them wherever they go. ... I didn’t have any team here growing up , but obviously there were leftover fans from when the Raiders were in LA, and even when the Rams were in LA.”

The Rams have been back in L.A. for seven seasons now, and after a 21-year absence, are finally winning back the locals.

But it's been a sketchy year for last season's Super Bowl champs .

Both teams had playoff aspirations when the NFL campaign began, but the Rams are in the midst of a six-game losing skid, as they entertain the league's worst season ever by a defending champion. The Raiders have won three straight games after starting the season with an abysmal 2-7 record.

Want to see the Champs? Get your L.A. RAMS game tickets from SI Tickets here!

I’ll never enjoy covering these stories but whenever someone sadly passes away we need to make sure it’s covered. If you’re a fan of USC or the Los Angeles Rams this persons death might hurt you more than on average. Former Cleveland Browns first round pick, Charles,...
LOS ANGELES, CA・2 DAYS AGO
All Seahawks

As the Rams look to get back to their Super Bowl level offense, the hire of Mike LaFleur is a potential step in the right direction.
3 HOURS AGO
RamDigest

Caley had been the longest-tenured offensive assistant on New England’s offensive coaching staff.
2 DAYS AGO