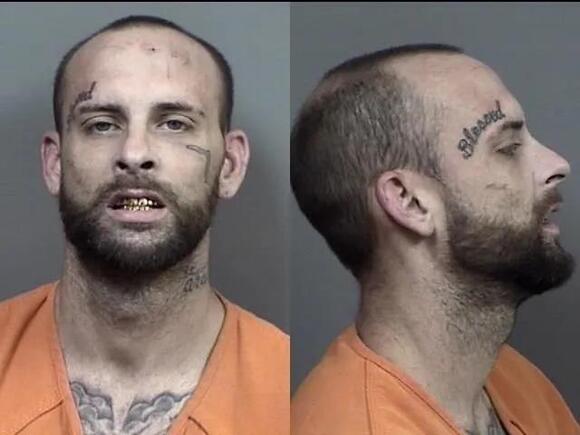 According to the Citrus County Sheriff’s Office, deputies were called to a home on South Suncoast Boulevard around 9:30 p.m. to investigate a domestic battery case.

There, deputies found two victims with minor injuries who said the suspect physically battered them, fired a gun, then fled the scene before authorities could arrive.

Deputies later found the suspect, identified as 34-year-old Derek Large, hiding under a trailer at a nearby business. Large was ordered to surrender, but refused and pointed a firearm at deputies, according to the sheriff’s office.

“Fearing for their safety and the safety of others, deputies on scene deployed lethal force,” an agency representative said in a post on Facebook.

The sheriff’s office later confirmed Large died at the scene and was found with a semi-automatic weapon next to his hand. The victims noted that Large was under the influence of drugs and alcohol at the time of the incident.

The sheriff’s office said the FDLE is investigating the matter.

At this time, three deputies were placed on paid administrative leave pending the results of FDLE’s investigation. No additional injuries were reported.

“The suspect posed a significant danger to our entire community and most especially the victims involved in this case,” Sheriff Mike Prendergast said. “When an impaired convicted felon recklessly points a handgun at law enforcement, a split-second decision has to be made by our deputies to protect themselves and our citizens. I am extremely grateful our deputies were able to go home at the end of their shift.”

may he finally rest in peace. There was alot going wrong between those ears. The writing was all over his face. It was his decision to die. We all know, if you point a gun at any police officer, they will shoot center mass.

Thank you to the deputies for taking another felon off the streets making them safer for decent folks!

TAMPA, Fla. (WFLA) — It’s been over three years since Andrew Caballeiro was abducted when he was just seven days old, and there’s still been no sign of him. On Jan. 28, 2020, an AMBER Alert was issued for the infant after he was kidnapped by his father, 49-year-old Ernesto Caballeiro. Police said the man […]
MIAMI, FL・1 DAY AGO
WFLA

An estimated 300,000 revelers lined the streets of downtown Tampa on Saturday for the 2023 Gasparilla Invasion and Parade of Pirates, the third-largest parade in the country.
TAMPA, FL・1 HOUR AGO
WFLA

One person is dead after a home caught fire in Pasco County on Saturday.
PASCO COUNTY, FL・1 DAY AGO
WFLA

Maggie The Toucan was stolen from the Horsepower for Kids & Animal Sanctuary earlier this week.
HILLSBOROUGH COUNTY, FL・2 DAYS AGO
WFLA

Firefighters staged a dramatic rescue Monday of a K-9 that got himself stuck in a Tampa pond.
TAMPA, FL・2 HOURS AGO
WFLA

A house fire ended up damaging two homes in Clearwater early Monday morning, according to a city release.
CLEARWATER, FL・9 HOURS AGO
WFLA

A part of southbound I-275 was partially closed after a multi-vehicle crash in Tampa, according to police.
TAMPA, FL・8 HOURS AGO
WFLA

HERNANDO COUNTY, Fla. (WFLA) – An elderly woman has died following a crash early Friday morning. According to police, a Hernando County woman, 76, was traveling eastbound on Snow Hill Road around 7:27 a.m. when she failed to come to a complete stop at a stop sign. As a result, a Dover man, 26, collided […]
HERNANDO COUNTY, FL・2 DAYS AGO
WFLA

"No one prepares you for that," George Rovolis' brother said. "There's no guide, no manual for any of that."
SAINT PETERSBURG, FL・2 DAYS AGO
WFLA

"Someone had been using her number, filing tax returns under her number, and the stimulus check was going to the account that showed up on these tax returns."
TAMPA, FL・2 DAYS AGO
WFLA

Hundreds of pirates invaded the city of Tampa Saturday during the Gasparilla Invasion.
TAMPA, FL・2 DAYS AGO
WFLA

Make way, mateys! The pirates have captured the city of Tampa and are sharing their treasure with everyone along the parade route.
TAMPA, FL・2 DAYS AGO
WFLA

‘Keep the city clean’: Volunteers clean up after Gasparilla

From the Knight parade to the Gasparilla Distance Classic, there's much more to come.
TAMPA, FL・1 DAY AGO
WFLA

Gasparilla season continues with these events in the Tampa Bay area

From half-marathons to festivals, several events are scheduled for the months ahead to keep the Gasparilla spirit going.
TAMPA, FL・1 DAY AGO
WFLA

Backyard chickens: Is it legal to keep chickens in Tampa & St. Pete?

As egg prices remain elevated, where in Tampa Bay can you keep chickens to get your eggs at home?
TAMPA, FL・2 DAYS AGO
WFLA

The franchise hired more than 130 crewmembers for multiple positions at its new location.
CLEARWATER, FL・3 HOURS AGO
WFLA

hoy, me mateys! Pirates are invading Tampa for this year's Gasparilla.
TAMPA, FL・2 DAYS AGO
WFLA

Tampa among most expensive drinking cities in US, study says

If you'll planning a night out, you'll have to factor in the cost of drinks, food and sometimes even an Uber or Lyft. If you want to go out in Tampa, expect these things to be even more pricey.
TAMPA, FL・2 HOURS AGO
WFLA

Pirate parade-goers and participants share why they love Gasparilla

Hats, feathers, beads and corsets were everywhere you looked in Tampa as hundreds of thousands of pirates invaded the city for the annual Gasparilla Pirate Fest.
TAMPA, FL・1 DAY AGO