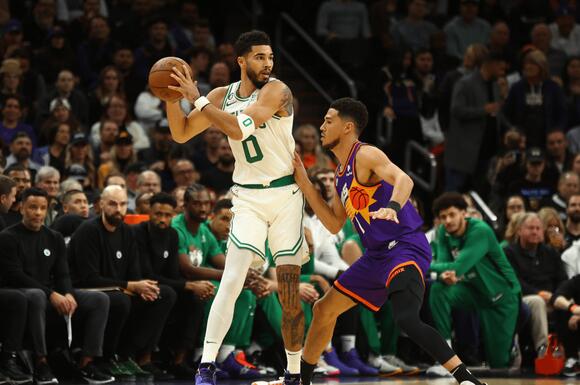 In a nationally televised game, the Phoenix Suns were humbled in major fashion against the Boston Celtics.

PHOENIX -- It's not typical for the Phoenix Suns to drop a game at home. Entering this week, the Suns lost just two games at home.

It's also not typical for Phoenix to drop consecutive games, something that's only happened once this season.

It's really not typical for the Suns to get flat-out embarrassed in back-to-back outings, but the Boston Celtics ensured that happened in a 125-98 victory at the Footprint Center.

Phoenix hoped to put a dreadful Monday showing vs. Dallas behind them, yet that was far from the case.

Jayson Tatum heard "MVP!" chants at the line. A vibrant chorus of "Lets Go Celtics!" rang through a half-empty arena in the fourth quarter.

Tonight marked the first time Phoenix has lost consecutive regular season games by 19 points or more since Feb. of 2020. It also marked the third time all season the Suns failed to reach 100 points.

Prior to the game, Monty Williams spoke on Chris Paul returning from injury after missing the last 14 games.

"Starting is actually tougher when you shorten the minutes because you want to finish with Chris (Paul). It would be much easier to bring him off the bench because you could finish each quarter with him," Williams said.

"We are trying to manage that part too. Somewhere along the line I’ll probably have to give him a shorter stint. In case we have to finish, wish you could win every game by 20 and not have to worry about it. But we are playing against a team that is really good in so many areas. Trying to balance that part and trying your best to win the game.

"We will just see as we go, but he will start.”

Not much went right for Phoenix, if anything did at all. Boston, the East's top team, simply looked like the NBA Finals contender they were last year. The Suns proved to still be a work in progress despite the massive talent on the roster.

Phoenix finished with 25% shooting from the arc and was paced by Josh Okogie in scoring (28).

Booker had four fouls at halftime and ended up with 17 points. This was the first two-game stretch this season where he was held to under 20 points.

The Suns emptied the bench with 4:57 left in the third down by 43 and never looked back.

Phoenix hopes to move on to a two-game series in New Orleans beginning on Friday.

Kenny Smith details just how miserable the culture of the Sacramento Kings was, having spent 3 years with them
SACRAMENTO, CA・3 HOURS AGO
rolling out

NBA players confirm once again: They don’t like Trae Young

Philadelphia 76ers general manager Daryl Morey believes the team will make a move heading of the NBA trade deadline, but
32 MINUTES AGO
The Big Lead

Tragic news has struck the world of professional wrestling with the word that one of wrestling's biggest stars has lost his life at the age of 38. Celebrity entertainment outlet TMZ, which is known for breaking the news of many deaths of famous people around the world, broke the news of the death of legendary wrestler Jay Briscoe, who has tragically died in a car crash at the age of 38.
21 HOURS AGO
Inside The Rockets

While attending the memorial service for his late father, Houston Rockets coach Stephen Silas will miss Saturday's contest against the Pistons.
HOUSTON, TX・36 MINUTES AGO
Inside The Suns

The Phoenix Suns could find themselves a new general manager if the Golden State Warriors and GM Bob Myers part ways this summer.
PHOENIX, AZ・2 DAYS AGO
Inside The Suns

Chris Paul Speaks Out on Death of Tyre Nichols: 'Change is Needed'

According to NBA reporter Marc Stein, two-time NBA All-Star Andre Drummond is a player who could potentially get traded.
CHICAGO, IL・27 MINUTES AGO
Inside The Suns

Phoenix Suns head coach Monty Williams was not a happy camper after Thursday night's loss to the Dallas Mavericks.
PHOENIX, AZ・20 HOURS AGO
Inside The Suns

The Dallas Mavericks - without Luka Doncic for a majority of the game - were able to defeat the Phoenix Suns on Thursday night.
PHOENIX, AZ・1 DAY AGO
Inside The Suns

Phoenix Suns point guard Chris Paul was the most recent member of the team to come out and say they miss the presence of Jae Crowder.
PHOENIX, AZ・21 HOURS AGO
Inside The Suns