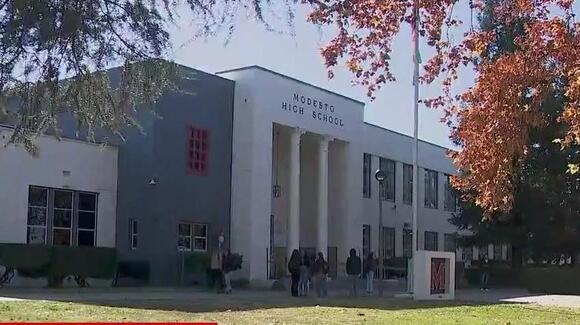 MODESTO, Calif. (KTXL) — Modesto City Schools said a principal and certified employee at one of their schools were put on paid administrative leave due to allegations of inappropriate conduct.

A spokesperson from the district told FOX40 News that district officials would investigate the allegations, but did not specify who made them.

According to the district, it’s alleged the inappropriate conduct happened while on campus at Modesto High School during school hours. The spokesperson did clarify that the allegations do not involve any students or other staff members.

(KTXL) — A Stockton Police officer who was under investigation by the San Joaquin County District Attorney’s Office is no longer an employee of the Stockton Police Department. — Video Above: Pursuit of Rancho Cordova homicide suspect ends in shooting According to the police department, Ny Tran was arrested in November 2022, for the suspicion […]
STOCKTON, CA・1 HOUR AGO
FOX40

(KTXL) — An internal investigation of a San Joaquin County Correctional Officer has prompted their arrest, according to the San Joaquin County Sheriff’s Office. The officer is facing charges of possessing a controlled substance with intent to sell and illegally possessing an assault weapon, according to the sheriff’s office. “We understand this information brings many […]
SAN JOAQUIN COUNTY, CA・1 DAY AGO
FOX40

(KTXL) — Three people were cited in San Joaquin County after giving alcohol to minors, according to the sheriff’s office. — Video Above: Firefighters call for new ways to put out electric vehicle fires According to the sheriff’s office, one clerk was cited for selling alcohol to minors while two people were cited for buying […]
SAN JOAQUIN COUNTY, CA・1 DAY AGO
FOX40

(KTXL) — The person suspected of killing a woman in Rancho Cordova led officers on a chase to Elk Grove, according to the Sacramento County Sheriff’s Office.  The homicide investigation is concentrated on Ramsgate Way, near Mather Field Road, and officials responded around 1 p.m. The 18-year-old woman was pronounced dead at the scene, the […]
RANCHO CORDOVA, CA・1 DAY AGO
FOX40

(KTXL) — An arrest has been made in a July 2022 fire that destroyed the Moore’s Riverboat Restaurant, according to the River Delta Fire District. Rolly “Brian” Byrd was the second arrest made in connection to this fire. In September, Wyatt Tripp was arrested as a suspect of the fire. •Video above: Pursuit of Rancho […]
ISLETON, CA・9 HOURS AGO
FOX40

(KTXL) — One person was killed and two more were injured Monday morning in a fire investigators believe could be arson, the Stockton Fire Department said. According to the Stockton Police Department, firefighters located a 60-year-old woman inside who was pronounced dead at the scene. A 60-year-old man and a 2-year-old boy were taken to […]
STOCKTON, CA・3 DAYS AGO
FOX40

Teen hospitalized after being shot by Tracy Police Officer

(KTXL) — A 17-year-old is in the hospital after being shot by a Tracy Police Officer on Friday afternoon, according to the Tracy Police Department. Police said that a call came in of two male subjects chasing each other with one of the males holding a knife in the Silvertail Place Foxtail Way area. At […]
TRACY, CA・5 DAYS AGO
FOX40

Suspect arrested in deadly I-5 shooting in Stockton, CHP says

(KTXL) — The California Highway Patrol said they made an arrest in a deadly shooting that happened on Interstate 5 in Stockton. •Video Above: Truck falls into sinkhole in Tracy The shooting happened near I-5 and March Lane on Jan. 26, and officers were notified of the shooting around 9:05 p.m.  At the scene, officers […]
STOCKTON, CA・3 DAYS AGO
FOX40

Pedestrian killed in hit-and-run near Manteca

(KTXL) — A pedestrian was killed Monday morning in Stockton after they were hit by a car that then fled from the scene, according to the California Highway Patrol Stockton Office. — Video Above: Truck falls into sinkhole near Tracy CHP said that the accident occurred near State Route 120 and French Camp Road outside […]
MANTECA, CA・3 DAYS AGO
FOX40

(KTXL) — Due to expected freezing temperatures overnight, the City of Stockton has opened warming centers this week.  •Video Above: California snowpack is double its average for this time of year Since Jan. 30, the warming centers have been at two community centers: Arnold Rue Community Center and Stribley Community Center. Both community centers are […]
STOCKTON, CA・1 DAY AGO
FOX40

(KTXL) — A vehicle collision with a tree near Valley Springs sent a small child and another person from Stockton to the hospital on Friday night, according to Calaveras Consolidated Fire. The collision happened around 2 a.m. along Highway 26 near lower Double Springs Road about three miles east of Valley Springs. The child and […]
CALAVERAS COUNTY, CA・5 DAYS AGO
FOX40

Truck falls into sinkhole days after another vehicle fell in

(KTXL) — A truck bypassed ‘Road Closed’ signs and fell into a sinkhole near Tracy, just two days after another vehicle did the same thing at the same sinkhole, according to the California Highway Patrol. “This was 100% preventable…the signs are clear, visible and unobstructed,” the CHP said in a Facebook post. The incident happened […]
TRACY, CA・3 DAYS AGO
FOX40

Freezing and near freezing temperatures felt across the Sacramento Valley

(KTXL) — In what was predicted to be a cold morning by the National Weather Service, the Sacramento Valley recorded freezing and near freezing temperatures on Wednesday morning. On Friday the NWS predicted that a cold weather system could drop temperatures as low as 28 degrees on Tuesday night. Although temperatures did not drop that […]
SACRAMENTO COUNTY, CA・1 DAY AGO
FOX40

(KTXL) — An Amazon driver from the Central Valley in California became a hero after saving a dog from a burning vehicle.  While finishing his deliveries in Merced, Ervin Ruhe noticed a vehicle was on fire on the side of the road and offered to help, a representative from Amazon told FOX40 News in an […]
MERCED, CA・2 DAYS AGO