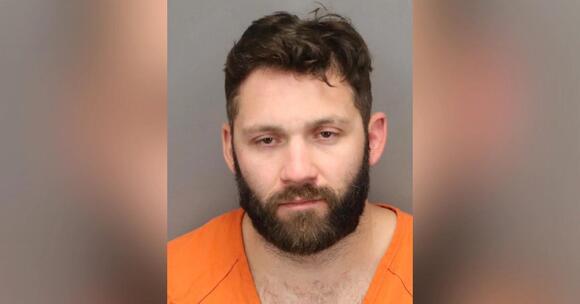 PINELLAS COUNTY, Fla. ( WFLA ) — An off-duty Chicago police officer vacationing in Florida was arrested Monday after he was caught peeing into an ice machine while at a bar in St. Petersburg, according to the Pinellas County Sheriff’s Office.

An arrest report says an employee at Jimmy B’s Beach Bar, located in the 6200 block of Gulf Boulevard in St. Petersburg Beach, was going to get ice when the worker allegedly found 30-year-old Henry Capouch “pissing” on the ice cubes in the machine.

When the worker told the 30-year-old off-duty officer to stop, Capouch began swearing and pushing the worker “a couple times” with both of his hands, arrest documents added.

Shortly after, the worker and a security guard escorted a Pinellas County deputy to where Capouch was sitting on the beach with his girlfriend.

Authorities said Capouch was “actively resisting,” and not obeying commands while being detained. “Capouch continued to yell and kept standing when told to sit multiple times,” the arrest report said.

Documents noted Capouch’s actions may have been influenced by alcohol. He was charged with disorderly conduct and simple battery.

According to Nexstar’s WGN-TV , Capouch joined the Chicago Police Department five years ago. A spokesperson for the CPD said the department opened an internal investigation into Capouch’s alleged behavior.

A 39-year-old father was arrested after his child reportedly arrived at a Florida elementary school with a handgun in a backpack.
TAMPA, FL・10 HOURS AGO
WFLA

The department said they're bringing in around 15 specially trained tactical dispatchers to handle the massive amount of information tomorrow. Officials said there will be so many cops, dispatchers will have information even before a 911 call comes in.
TAMPA, FL・1 HOUR AGO
WFLA

The Florida Department of Law Enforcement has opened a use-of-force investigation into the arrest of Antwan Glover.
LAKELAND, FL・1 DAY AGO
WFLA

Maggie The Toucan was stolen from the Horsepower for Kids & Animal Sanctuary earlier this week.
HILLSBOROUGH COUNTY, FL・5 HOURS AGO
WFLA

A teenage boy and girl linked to a spree of crimes across the City of Tampa were arrested Wednesday, officials said.
TAMPA, FL・1 DAY AGO
WFLA

He suffered serious injuries and was taken to an area hospital, where he later died.
LARGO, FL・8 HOURS AGO
WFLA

A corrections officer accused of grabbing a woman's face and forcing her to the ground was arrested Wednesday, according to the Polk County Sheriff's Office.
POLK COUNTY, FL・1 DAY AGO
WFLA

"No one prepares you for that," George Rovolis' brother said. "There's no guide, no manual for any of that."
SAINT PETERSBURG, FL・6 HOURS AGO
WFLA

PASCO COUNTY, Fla. (WFLA) — Pasco County deputies are searching for a suspect who stole a 1930s pickup truck. Deputies said the truck, a 1937 GMC COE (Cab Over Engine) pickup truck with Florida antique tag IZ2358, was stolen from a business parking lot near the intersection of State Road 54 and Success Drive in […]
PASCO COUNTY, FL・1 DAY AGO
WFLA

Every year, hundreds of thousands of pounds of beads are tossed during the parade of pirates. The Tampa Police Department Dive Team has already been working to make sure pirate treasure stays out of the waterways.
TAMPA, FL・11 HOURS AGO
WFLA

TAMPA, Fla. (WFLA) — Tampa detectives said they are working to identify persons of interest after a mother was killed during a shootout. On Jan. 18, Tampa police said they found Latoya Gay, 26, suffering from a gunshot wound at the Silver Oaks Apartments on Kenneth Court. Gay was taken to a nearby hospital, where […]
TAMPA, FL・2 DAYS AGO
WFLA

A local woman is celebrating a huge milestone and birthday!
HILLSBOROUGH COUNTY, FL・1 DAY AGO
WFLA

"Someone had been using her number, filing tax returns under her number, and the stimulus check was going to the account that showed up on these tax returns."
TAMPA, FL・4 HOURS AGO
WFLA

FWC cracking down on BUI this Gasparilla

The Jose Gasparilla will emerge at the south end of Hillsborough Bay on Saturday followed by hundreds if not thousands of boats.
TAMPA, FL・1 DAY AGO
WFLA

What to do with your beads after Gasparilla

Arguably one of the best things about Gasparilla is collecting as many necklaces as possible during the parade. But what should you do with those necklaces once the parade is over?
TAMPA, FL・1 DAY AGO
WFLA

The Florida State Fair has implemented a youth policy for minors who want to attend during the evening hours.
TAMPA, FL・11 HOURS AGO