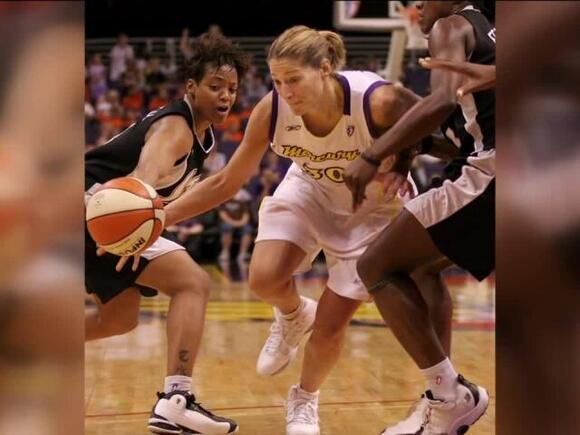 Anna DeForge is a Milwaukee Panthers women's basketball assistant coach. And at one point in tiny Niagara, Wisconsin, the state's all-time leading scorer in girls' hoops.

"I'm really honored," DeForge says. "And excited to be here. I think you know basketball has been a special part of my life through playing days. And now, for me at this point in my career, to be able to invest in people the same way people invested in me."

Do her players know that?

"It meant a lot," DeForge says. "You know like it was, coming from a small area and a small town, there was a lot of hoopla around that. There was a lot of attention given to it. It kind of put Niagara on the map in a sense, in a sports world type of way. So it was covered by everybody. And it was a little nerve-racking. Also, I was just 17. I fell in love with basketball early. I invested a lot of time into it. It was my passion. I never thought of it as work. As long as I played, while I'm here? I don't feel like I'm coming to work every day. Maybe I was a part of a wave that kind of changed the look or the, you know how people viewed players coming out of Wisconsin."

Professionally DeForge became a 2-time WNBA all-star, and a five-time champion in Europe. A trailblazer for women and girls hoopsters today.

"I did have the opportunity to play in the WNBA," DeForge says. "You know, in those pioneer days. It's now 20-plus years in existence which is phenomenal. But yeah, I mean to look back on my career and be like 'yeah I played at the highest level, for ten-plus years.' It's, it's kinda nice."

And now she wants to instill one key thing in the players she coaches.

"Confidence," DeForge says. "You know, the biggest thing that you could instill in these females and these ladies is confidence. You know, to always believe in yourself. To never let anything or anybody else dictate who you are. And who you wanna be."

Hopefully now, the name Anna DeForge will be known by her team and those all around the state as one of the best women's basketball players Wisconsin has produced.

Just days before the 2023 Super Bowl, one of the star players that is set to take the field for the game has been arrested on absolutely shocking charges. Offensive Lineman Josh Sills, who is in his rookie season for the Philadelphia Eagles, will be in court on February 16 in relation to claims that are so shocking and vile that we recommend you read for yourself here.
PHILADELPHIA, PA・1 DAY AGO