Juul settles more than 5,000 lawsuits, Kentucky to get 1st payment by year end 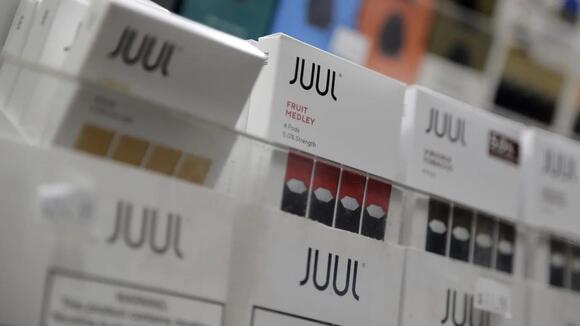 ( The Hill ) – E-cigarette company Juul announced on Tuesday it has settled more than 5,000 lawsuits for an undisclosed amount after claims mounted over Juul’s marketing practices and plagued the company’s finances.

The company said the global settlements resolve claims with roughly 10,000 plaintiffs who filed suits in recent months and nearly led Juul to bankruptcy, including personal injury claims as well as settlements with a consumer class action, local government entities and Native American tribes.

“The scope of these suits is enormous,” Lieff Cabraser, a co-lead counsel for the plaintiffs, said in a statement. “These settlements will put meaningful compensation in hands of victims and their families, get real funds to schools for abatement programs and help government and tribal entities prevent youth use of e-cigarettes across the U.S.”

The company had increasingly come under fire after an investigation found the e-cigarette company deliberately engaged in an advertising campaign that appealed to youth, and Juul has also settled with more than 30 states and territories over the issues that amount to nearly $440 million.

Multiple state attorneys general on Tuesday announced they had formally entered into that agreement, which was agreed in principle in September, touting funds recovered for their states.

Kentucky is set to receive its first payment of 1.3 million before the end of the year.

Those settlements also require Juul to change its marketing practices.

Juul said it was legally barred from disclosing the settlement amount for the other groups but indicated in its statement that it has secured an equity investment to fund the new resolution.

“These settlements represent a major step toward strengthening Juul Labs’ operations and securing the company’s path forward to fulfill its mission to transition adult smokers away from combustible cigarettes while combating underage use,” the company said.

Juul, which became an independent company in 2017, was once the leading vaping product and became a popular brand among teens.

But the company has since been embroiled in legal and regulatory battles, and the Food and Drug Administration (FDA) sought to remove Juul’s vaping products from the market entirely over the summer. A federal appeals court blocked that FDA order the next day.

The company nearly filed for bankruptcy, but in recent days it found a way to avoid doing so through layoffs and a cash infusion from early investors .

Dustin Massengill contributed to this story.

ELIZABETHTOWN, Ky. (FOX 56) – Kentucky State Police said a Hardin County couple was charged after a 5-year-old was treated for injuries on Sunday. A statement from police said on Sunday, around 4:30 p.m., the Hardin County Department of Community Based Services contacted Kentucky State Police regarding a child brought into Baptist Health Hardin. The […]
HARDIN COUNTY, KY・18 DAYS AGO
FOX 56

A Kentucky pharmacist and his wife have been indicted on charges of conspiracy to unlawfully distribute controlled substances.
BOWLING GREEN, KY・4 DAYS AGO
101.1. The Wiz

Dollar General Shuts Down All Stores Across Ohio

Every single Dollar General in Ohio has been shut down as of Friday morning, and now we know why.
OHIO STATE・1 DAY AGO
FOX 56

A seventh grader in Elizabethtown has been charged with terroristic threatening following an incident on Tuesday.
ELIZABETHTOWN, KY・3 DAYS AGO
FOX 56

An indictment warrant was issued by a Pulaski Grand Jury following a criminal investigation by the Pulaski County Sheriff's Office.
PULASKI COUNTY, KY・20 DAYS AGO
FOX 56

Two Kentuckians have been indicted on charges of wire fraud and disaster fraud, one faces more.
LOUISVILLE, KY・3 DAYS AGO
FOX 56

Authorities are investigating a shooting in Pulaski County after a woman was dropped off at a hospital Thursday.
PULASKI COUNTY, KY・1 DAY AGO
FOX 56

The Henderson Police Department said they have experienced a dramatic increase in overdose calls in the last two days.
HENDERSON, KY・15 DAYS AGO
FOX 56

Deputies from Pulaski County and K-9 Leo made a drug bust during a traffic stop.
PULASKI COUNTY, KY・15 DAYS AGO
FOX 56

Laurel County police chase ends in 2 arrests, 1 on the run

One man is on the run and two people were arrested after a police chase in Laurel County.
LAUREL COUNTY, KY・17 DAYS AGO
FOX 56

Detectives said the Denny's sign on Mulberry Street in Elizabethtown blew over at around 1:30 p.m. Thursday due to high wind gusts and fell onto a vehicle below.
ELIZABETHTOWN, KY・4 DAYS AGO
FOX 56

The Kentucky State Police are handling an investigation following a police pursuit that peaked around mile marker 45.
LONDON, KY・9 DAYS AGO
FOX 56

A worker at the plant found the fetus around 10 a.m. Thursday and called the Paintsville Police Department.
PAINTSVILLE, KY・19 HOURS AGO
FOX 56

The Knox County Sheriff's Office is asking for help locating two men believed to have been involved in a Wednesday shooting in Gray.
KNOX COUNTY, KY・1 DAY AGO
FOX 56

The chase began in Woodford County and ended in Franklin County when the driver shot at troopers.
WOODFORD COUNTY, KY・15 DAYS AGO