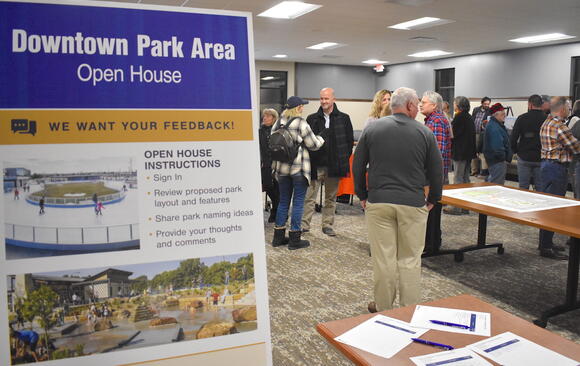 The Faribault City Council and Park Board held an open house and met with consultants to see and give feedback on more detailed plans for the park.

The 3-acre park will be located just north of the Highway 60 viaduct and is projected to be completed by summer 2025.

A task force recommended amenities and came up with a preliminary design last winter. The firm Kimley-Horn was hired to refine the proposal.

No action was taken at Tuesday’s workshop, but councilors were receptive to the plans, with a few suggestions for minor changes.

Before the City Council and Park Board sat down, members of the public were invited to see the plans and give feedback, including suggesting names for the future park. Park Board members will review the suggestions before recommending a name to the council.

The new design plans include one significant change from the original concept. A permanent amphitheater in front of a sloped seating area has been nixed, in favor of leaving an open space flat and totally undeveloped to maximize flexibility for hosting a variety of recreation and events.

A skating loop will be roughly 600 feet long and will be used year-round. It will be covered in ice and have a refrigeration system that will extend the ice-skating season from typically mid-November to late February. In the warmer months, the concrete loop will be open to skaters on wheels, and potentially as a site for community gatherings.

“We’d like to see it used as many months out of the year with as many different uses as possible,” City Administrator Tim Murray said.

A splash pad aimed at young children will have spraying water elements and no standing water. A natural stone theme, decorative lighting and seating around the perimeter for caregivers is proposed.

In between the splash pad and skating loop, the proposal includes a multi-use building. It will have a warming house that also could be used as a meeting space in the warmer months, a gathering space with large retractable doors, a skate rental and concessions area, two sets of bathrooms and a mechanical and equipment storage area.

Parking spaces are planned along the west and southwest edges of the park. A new city lot also is being planned just south of the bridge near an apartment building that will soon be constructed.

The city also is looking at enhancing the underside of the bridge with murals, lighting and exercise equipment between the pillars.

The construction cost estimate of $6.8 million to $9.2 million doesn’t include the design or other associated costs. The city has set a tentative total budget of $7.5 million.

“So our challenge is to either figure out where we can find additional funds or find ways to pare the project down to stay within the current budget,” Coyle said.

If the council gives the project the go-ahead soon, Coyle said design would take the next several months and construction would begin next October. The splash pad could be operational in summer 2024, but the skate loop would still be under construction and could pose a safety risk, Coyle said. He recommended waiting until summer 2025 to open the splash pad, after the skate park is completed in December 2024.

City Council and Park Board members had a few questions and ideas for tweaking the plans.

Councilor Janna Viscomi wanted more seating and accessible viewing areas in the park. She also worried lines for skate rentals and concessions would cause congestion in the entryway of the building and suggested an exterior access be added.

Councilor Jonathan Wood suggested a historical marker about local railroad history be added to the plans near the railroad tracks, which will be fenced off.

Councilor Sara Caron said she hopes the bridge mural features more “hip” artwork. She asked if alcohol would be permitted at the park. Parks and Recreation Director Paul Peanasky said he is looking to expand permitted consumption of canned beer at multiple parks.

Park Board member Lola Brand asked why there are no pickleball courts in the plans. Mayor Kevin Voracek said the task force discussed them, but they did not rise to the list of top priorities.