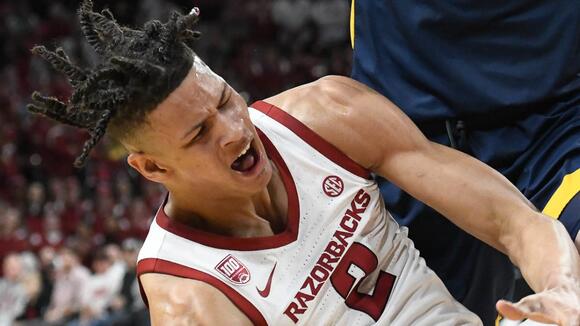 FAYETTEVILLE, Ark. – When it comes to a guy who brings energy and edge off the bench, Arkansas Razorback sixth man Trevon Brazile brings it like possibly no other player in the country.

Unfortunately for head coach Eric Musselman, that high flying force that dominates both ends of the floor will no longer be an option.

Following a freak injury in the first half against UNC-Greensboro, Brazile has been ruled out for the rest of the season.

Musselman said last night that the staff was waiting to see how the x-rays of his sophomore forward played out, and the ruling handed down around 3 p.m. Wednesday afternoon was that the athletic forward tore his ACL.

Arkansas loses its third leading scorer and also its leader in rebounds and blocked shots.

Despite technically being a bench player, Brazile has averaged over 27 minutes per game even after factoring in his nine minute appearance Tuesday night.

What were the circumstances and what was the most losses Arkansas has ever carried into March Madness?
FAYETTEVILLE, AR・21 MINUTES AGO
All Hogs

Unique stat indicates Hogs' coach may have key to be more consistent in SEC play
FAYETTEVILLE, AR・23 HOURS AGO
All Hogs

Where Do Musselman, Oat, Pearl Stand With SEC Greats?

Should Tennessee's Rick Barnes also be in consideration?
FAYETTEVILLE, AR・19 HOURS AGO
All Hogs