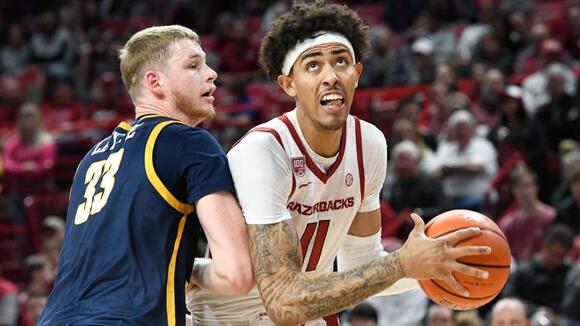 Previous Musselman teams had it, but its development with this group will determine how far Hogs go in March

FAYETTEVILLE, Ark. – In 1991, in the midst of playing a game against what many regard as one of the greatest recruiting classes in Arkansas history prior to Eric Musselman's 2022 class, UNLV forward Larry Johnson sauntered over to Arkansas coach Nolan Richardson and told him he needed to go get himself some men.

So here Arkansas is, 31 years later, yes, it's been that long ago, with talent bubbling over from the floor all the way down to the furthest bench seat.

Yet, if this team doesn't develop a change in mentality over the next several weeks, it's easy to imagine Kentucky's Oscar Tshiebwe sliding past Musselman on his way back down the court and saying "You need to go find you some dogs."

And there's one stat that backs that up – second chance points.

Last night's 65-58 win over UNC-Greensboro that saw the Razorbacks trail most of the game should have been a blood bath. It's 100 percent on mentality that it wasn't.

This team is unwilling to do the dirty work on the offensive end. Maybe it's because they're too preoccupied with trying to land the next big highlight that will blow up on Twitter or perhaps it's just not in their DNA, but it's a major problem.

One was an Anthony Black runner with two minutes left in the first half that clanked off the rim so hard it shot back into his chest so he immediately put it back up.

There was no effort to earn a second chance. It just happened by sheer accident.

The only other second chance basket came with 11 minutes left in the game. Johnson fought for a hard rebound, kicked it over to Davis who dribbled around for the pull-up jumper.

Nick Smith had an opportunity at a second chance basket with 10:30 left in the first half, but couldn't get the shot off.

That's it. One second chance basket in each half.

Six minutes of the game passed before the first attempt at an offensive rebound took place. That was only after Kamani Johnson and Trevon Brazile took the floor, immediately changing the team's energy.

Five Razorbacks came away with a single offensive rebound each Tuesday night and only one was a starter.

Twenty-six offensive shots went up and missed for the Razorbacks without a rebound.

That's something that has never been an issue with Musselman's Razorback teams in the past. Following the tradition of guys like Andrew Lang, Joe Kleine, Todd Day, Lee Mayberry, Corey Beck and Corliss Williamson, Musselman's first three teams displayed grit, determination and a taste for all phases of the fight.

There wasn't NCAA tournament level talent collectively on that first team and there wasn't Elite 8 talent on either of the last two teams. However, there was championship effort and heart on all three that allowed them to develop into a team well above their station.

Mason Jones took a pounding, but he was basketball's Rocky story as he kept pushing through, bulling his way down the middle when it looked like his iteration of the Razorbacks had no hope and then scratched and clawed for second and third chances until he willed hope to happen.

Justin Smith and Jaylin Williams took on bigger defenders nearly every night, yet they fought with all they had. They made a living on tough baskets and second chance points.

It didn't matter how many times they had to put it back up or how many elbows they took to the ribs, they scrapped with every fiber of their being and weren't willing to concede if there was the slightest chance Arkansas could outwork their opponent to put points on the board.

The same could be said for most of last year's team down the stretch.

Au'diese Toney, Trey Wade, J.D. Notae, Stanley Umude, Kamani Johnson and Davonte Davis joined Williams in their fierce thirst for the win and dog mentality that kept them constantly engaged in the fight as if their lives depended on it.

Those teams were beautiful in their ugliness.

By the time this season ends, this could be the greatest team Arkansas ever puts on the floor. But right now it's only the most talented.

The Mitchell twins each have the ability to post up and dominate the paint with body blow after body blow. Teams should fear their physical presence inside as they put guys on their hips and power through them.

Yet, this team doesn't have the patience for that.

Nearly half the team has an aspect of its game that is completely untapped that would make them dominant top tier NBA talent if they're willing to go a little old school.

Day made it a point to back opposing guards down, especially when he smelled a mismatch, and demoralized defenders as the bigger, better athlete. When teams would slide a man over to help, Day, Mayberry and center Oliver Miller punished them for it.

If he missed, Day went in amongst the trees and used his athleticism and fight to get the rebound. He finished his college career with 673 rebounds as a 185 pound shooting guard.

If a bigger defender got moved over to cover Day to keep him from backing guys down, he carved them up by blowing past them. His willingness to get his hands dirty gave Richardson extra moves on the chess board so the Hogs could find a way to win against all playing styles.

These Arkansas guards are bigger and faster than almost anyone they face. Imagine them backing guys down.

What's the defense going to do? These guards are too tall to stop the turn around jumper and too quick and sure-handed to stop a spin move.

They're a rebounding mismatch for nearly every person assigned to them.

If this team had that dog mentality on the glass to just be relentlessly determined to make every possession result in points on the scoreboard, it would hang 100 points nearly every night.

That's 26 possessions, 26 missed shots without an offensive rebound. In a heavy majority of those cases no one even tried to get one.

If the Hogs had put in the effort to come down with half of those missed shots and converted just six of them, this is a much more comfortable 77-58 win assuming points weren't taken off the board for UNC-Greensboro, which definitely would have happened.

Arkansas finished the first half 9-of-30 from the field and 0-for 8 from three. A dog mentality is how teams find a way to blow out a weaker foe or hang around with a quality opponent when the shots aren't falling.

When Johnson comes in, Arkansas gets that change in attitude that it needs all game long. It immediately spread over to Brazile when the two were together on the floor Tuesday night. Same for the San Diego State game.

But that's got to spread further. It has to become ingrained across this entire roster.

This is the time of year when Musselman's teams begin their greatest stretch of development.

However, if he can't find a way to build a scrappy, dog mentality within this group, the greatest collection of talent in Arkansas history might find itself out of the fight before its less naturally gifted recent predecessors come March.

South Carolina's Josh Gray did everything needed to upset Arkansas, but a Razorback freshman made a senior move
FAYETTEVILLE, AR・16 HOURS AGO
All Hogs

What delayed and potentially shifting college landscape could mean for Razorbacks
FAYETTEVILLE, AR・2 DAYS AGO
All Hogs