MU enjoyed the comforts of home in sweeping Ball State and Georgia Tech over the first two rounds at the Al McGuire Center. The Golden Eagles went undefeated at home for the first time, winning all 18 matches at their on-campus arena.

But now MU will be thrown into hostile territory against top-seeded Texas at Gregory Gym in Austin, Texas. The match is expected to begin around 1:30 p.m. Central time or 30 minutes after the Ohio State-Minnesota meeting in the same building.

More: How a setter from Peru and some heavy hitters helped Marquette volleyball have one of its best seasons

Theis did a few things to prepare his players for the cramped Gregory Gym, including shrinking the space around the practice court at the Al McGuire Center.

“It will be loud and rocking," Theis said. "We do the best we can to simulate it. But there’s nothing like it. We can’t really experience it until we’re there. So we’ll get into it and hopefully start with excitement versus nervousness.” 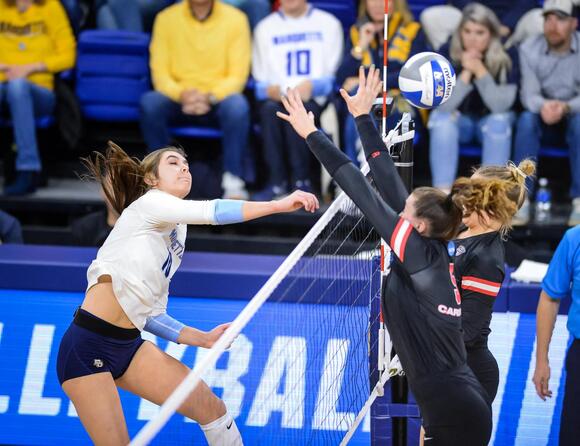 MU outside hitter Aubrey Hamilton has first-hand experience after playing on Texas' court when she was at Notre Dame.

"The environment is crazy," Hamilton said. "The student section is like right on the court. There’s just so many fans there just cheering loud."

Hamilton is a big reason why MU has advanced to the Sweet 16 for just the second time in program history. The former Arrowhead High School standout leads the Golden Eagles in kills (3.52 per set) and points (4.08) in her first season after transferring.

"They’re tall and they have, like, big hitters but that shouldn’t intimidate us because we’ve played against Wisconsin and Kentucky," Hamilton said of Texas. "So we’ve had experience with teams like this before."

Marquette has one of nation's top offenses

MU is bringing one of the nation's top offenses to Austin, Texas.

The Golden Eagles enter the match with a .293 hitting percentage and 14.57 kills per set.

"We believe we can get kills," Theis said. "We believe that will make this a race to 25 points. We know not a lot of people are picking us. But if we can score some early and make our team feel like they belong, then I think we can compete.”

The stakes are higher now, but MU has experience playing in tough venues this season.

"We were at Wisconsin, at Creighton twice in front of sellouts in those environments," Theis said. "We’ve certainly had some big crowds here (at the Al McGuire Center).

"So I don’t think I’ve noticed ever a nervousness with a crowd. I think it’s more of a confidence with your opponent. So if you get blocked a couple times, can you stay confident through that?"

The Golden Eagles will find out Thursday.