FanNation Kicks provides the latest coverage in the world of sneakers.

Deion Sanders Might Have a Nike Problem at Colorado 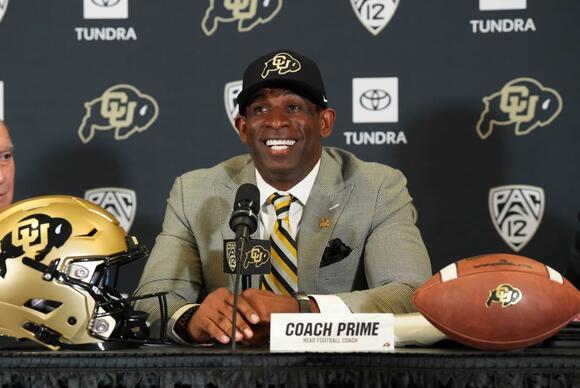 Deion Sanders is an Under Armour ambassador but will be required to wear Nike apparel while coaching at Colorado.

It is nearly impossible to overshadow the NCAA football conference championship weekend. While professional sports and domestic politics struggled to garner attention, only one man was capable of grabbing the limelight - Deion Sanders.

On Saturday, the University of Colorado announced the hiring of Sanders to serve as the head coach of the Buffaloes football team. Hiring one of the most highly-sought after coaches was a major win for the lowly Pac-12 school. However, Nike and Under Armour are still battling over "Prime Time."

Sanders cemented his legacy by playing in two professional sports leagues in his heyday. The generational talent double-dipped in the NFL and MLB throughout most of his career. Sanders' unmatched athleticism and equally magnetic personality netted him every sponsorship deal imaginable.

Sanders was already an icon thanks to his play on the field, but Nike helped elevate the superstar to new heights. The Oregon-based company launched multiple sneakers as part of Sanders' signature line, which was just as successful on the sales floor as its namesake was on the gridiron or diamond.

After Sanders' playing days ended, the sports legend signed an endorsement contract with Under Armour. As an ambassador for the Maryland-based company, Sanders enjoyed a resurgence in the retail world with new apparel and sneakers.

In fact, after accepting the head coaching job at Jackson State, Sanders was influential in the school's new apparel deal. Shortly after Sanders took over the football program, Jackson State left Nike to sign a five-year apparel deal with Under Armour.

There was heavy speculation in 2020 that Jackson State would leave Nike for Under Armour. During his introductory press conference, Sanders made sure not to wear any Jackson State clothing that bore the Swoosh logo.

However, that was not the case this past weekend in Boulder. Sanders wore a cap with a clearly-visible Swoosh logo on the side. Unlike Jackson State, it is unlikely that Colorado will make a change in sponsorship.

Colorado has been a Nike school since 1995 and is currently in its fourth contract with the sports apparel behemoth. Colorado's ten-year deal with Nike does not expire until the end of the 2024-25 fiscal year.

Fans should not expect the Buffaloes to make a switch anytime soon, or perhaps ever. However, Sanders' contractual obligations with Under Armour might be a different story. We will keep readers updated as the story unfolds.

Best of NFL's "My Cause, My Cleats"

I've read numerous threads about coach Prime and it's alot of certain people praying for his undoing. I wonder if they had the same energy towards Lincoln Riley or Lane Kiffin when they switched programs? I doubt it

It's funny how so many want this man to fail. Yet all he seems to do is win. I wonder if it's because like a former President of ours he doesn't allow others to dictate to him. He doesn't play step n fetchit. He forced all of college football to see he can deliver.

I support prime, he done everything he said he was gone do... Jack state is now prime sports school, it's gone b a lot of talent come there even without him... Nobody other than locals even knew dat school bfo he was der... they won national championship, went undefeated, and 2 r 3 players from that school is getting a NFL shot.... I don't understand d hate, da man never promised he was gone stay forever, he did his part... Just say y'all gone miss em, not he a sell out... He got bigger things to achieve, if he goes to Colorado hits it out d park, take it to d NFL, he could change much more than hbcus, he could change d whole coaching land scape at all levels.... Come on my people... The same people dats criticizing him, I bet u dey still got on dey cowboys gear, supporting dey racist owned team and other teams.... stop d hate

It’s the sound of hearts breaking across Philadelphia and the state of Pennsylvania… and let’s be honest, everywhere else in the country, too. Eagles quarterback Jalen Hurts made a very rare public appearance with his girlfriend Bryonna “Bry” Burrows after the NFC Championship game this past Sunday, which is a surprise to many fans, as he is extremely private about his life outside of football.
PHILADELPHIA, PA・1 DAY AGO
Yardbarker

The Pittsburgh Steelers and Philadelphia Eagles have been in the NFL since its inception. The two teams even briefly combined forces during World War II and called themselves the Steagles. The players and coaches didn’t like it then and the two fan bases don’t like each other now. Fans from the same state rarely get along and the vitriol was on display after the Eagles made their second Super Bowl in five seasons.
PHILADELPHIA, PA・2 DAYS AGO
FanNation Kicks

The college basketball world is mourning the loss of a legend this week following the death of a longtime coach that led one small school to historic highs in the NCAA Tournament.
HARRISONBURG, VA・16 HOURS AGO
FanNation Kicks

LeBron James, Stephen Curry, and Kevin Durant had some of the best shoes worn during NBA games in January.
20 HOURS AGO
FanNation Kicks

FanNation Kicks provides the latest coverage in the world of sneakers.