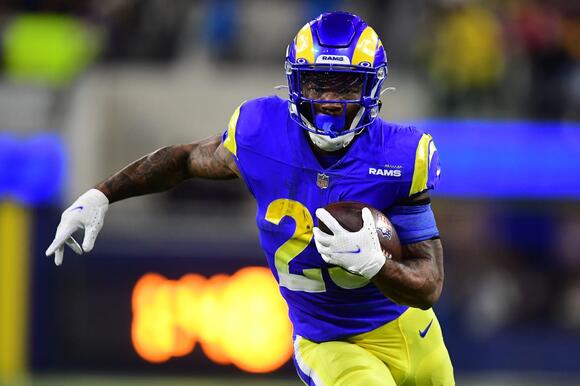 Los Angeles will attempt to snap a six-game losing streak vs. a Raiders team who is showing signs of life with a chance to crash the playoff party.

On a short week, the Los Angeles Rams host the Las Vegas Raiders in prime time on Thursday night from Sofi Stadium. Decimated by injuries, the Rams will attempt to snap a six-game losing streak vs. a Raiders team who is showing signs of life with a chance to crash the playoff party.

Los Angeles in last place in the NFC West and likely to miss the playoffs , just one season removed from reigning as Super Bowl LVI Champions. The Rams' (3-9) season has continued its seemingly uncontrollable tailspin with a depleted roster as Matthew Stafford, Cooper Kupp and Allen Robinson are all on the injured reserve list.

The Rams lost to NFC West rival Seattle on Sunday with much thanks to the heroics of Geno Smith. John Wolford got the start over Bryce Perkins at quarterback for the Rams in the 27-23 loss that ensured Sean McVay’s first losing season as a head coach. Bobby Wagner had one of the best performances of his 11-year career vs. his former team in Seattle, finishing with five total tackles, three tackles for loss, two sacks, and an interception.

The Raiders are fresh off a 27-20 win vs. the Los Angeles Chargers in which wide receiver DaVante Adams led the team with eight receptions for 177 yards and two touchdowns. Las Vegas hopes to keep its two-game winning streak alive.

ODDS: The Rams are 5.5-point underdogs vs. the Seahawks.

THE FINAL WORD: Rams head coach Sean McVay of if Stafford (spinal cord contusion) is likely out for the season:

"There's a good chance that that's probably the case."

I’ll never enjoy covering these stories but whenever someone sadly passes away we need to make sure it’s covered. If you’re a fan of USC or the Los Angeles Rams this persons death might hurt you more than on average. Former Cleveland Browns first round pick, Charles,...
LOS ANGELES, CA・12 HOURS AGO
RamDigest

Former Los Angeles Rams quarterback Jared Goff knows a thing or two about starting over, and he has advice for exiting Raiders signal caller, Derek Carr.
LAS VEGAS, NV・1 DAY AGO
The Comeback

Last week, legendary quarterback Tom Brady officially announced his retirement from the NFL last week, prompting all sorts of tributes from several people all across the league with some sharing stories about his life on and off the field. It’s also led to some speculation as to why exactly Brady is retiring, and Brady’s father has the answer. In an Read more... The post Tom Brady revealed real reason for retirement appeared first on The Comeback: Today’s Top Sports Stories & Reactions.
11 HOURS AGO
prosportsextra.com

Death is never something we like to talk about but recently the NFL lost someone at a very young age. Denver Broncos Super Bowl winning running back Ronnie Hillman has died at the age of only 31. Hillman had been battling a rare form of cancer called renal medullary carcinoma...
DENVER, CO・8 HOURS AGO
RadarOnline

Humbled NFL great Tom Brady seems to have hung up his cleats for good in a desperate attempt to win back supermodel ex-wife Gisele Bündchen and mend their family, RadarOnline.com has learned. A source close to the situation said that while Gisele appears to have moved on after the couple’s October divorce, Tom has been begging the beauty to give him another chance since announcing on Feb. 1 he’s finally called it quits. Of course, Brady retired before — in January 2022 — and reneged on the decision, which has left fans and people in his life questioning whether his...
7 HOURS AGO
RamDigest

Who are the best ever quarterbacks to start the Super Bowl?
14 HOURS AGO
RamDigest

Rams in the NFL Pro Bowl Games: How to Watch

Rather than the traditional football game with full pads and NFL rules, the Rams players and other participants will instead play in a 7-on-7 flag football game.
LAS VEGAS, NV・1 DAY AGO
RamDigest

Can the Rams "win the trade'' in a swap of Jalen Ramsey to the Jags or the Cowboys? It's much harder than it seems.
DALLAS, TX・9 HOURS AGO
RamDigest

Sean McVay led the Los Angeles Rams to the playoffs in four out of six seasons, including two Super Bowl appearances and one Super Bowl win. So .. what's the Cowboys' problem here?
DALLAS, TX・2 DAYS AGO
RamDigest

Caley had been the longest-tenured offensive assistant on New England’s offensive coaching staff.
1 DAY AGO