Police: Suspect in 3 shootings turns himself in, police search for motive and weapon 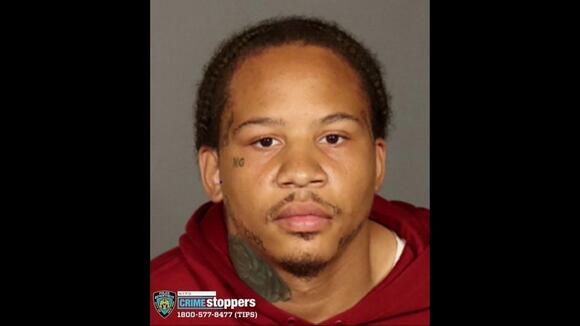 Police are searching for a gun and a motive after Sundance Oliver, the suspect in three shootings and a slew of robberies, turned himself in to police Tuesday.

Oliver has 12 prior arrests, according to police.

Police say he is responsible for several crimes throughout the Bronx, Brooklyn and Manhattan.

Police say Oliver shot a 96-year-old man outside the Kingsborough Houses. The man is in stable condition.

A few hours later, he shot and killed a 20-year-old man in Manhattan, according to police.

Officials say that after he turned himself in on Tuesday morning, he was placed in a holding cell at the precinct and grew violent. They took him to a hospital for an evaluation before returning him to the precinct.

The NYPD escorted Oliver out of the 77th Precinct on Wednesday.

“At this point in the investigation, we know both homicide victims are known to our perpetrator,” says “The motive is not yet known at this time as to why he killed them.”

Sources: Police track down person of interest in connection to shooting of off-duty NYPD officer to Rockland hotel

Officials were at the Day's Inn in Nanuet in the hope of finding information on the person who shot an off-duty NYPD officer Saturday in an attempted robbery.
ROCKLAND COUNTY, NY・2 HOURS AGO
News 12

Source: Person of interest in custody for shooting of off-duty NYPD officer from Deer Park

A person of interest is in custody in connection to the shooting of an off-duty police officer from Deer Park, a source tells News 12. The 26-year-old officer remained on life support Monday after he was shot in Brooklyn over the weekend after police say he arranged on social media to meet up with the seller of a car in East New York on Saturday evening.
DEER PARK, NY・19 HOURS AGO
News 12

Police say both victims, a 19-year-old male and a 17-year-old girl, are in stable condition.
BROOKLYN, NY・7 HOURS AGO
News 12

A shooting in Canarsie Monday morning left a man in critical condition, police say. The shooting took place just before 10 a.m. on Paerdegat 1st Street, according to authorities. The victim was taken to a hospital for treatment. No arrests have been made, but an investigation is ongoing.
NEW YORK CITY, NY・11 HOURS AGO
News 12

An investigation revealed 36-year-old Letoya Washington came at two of her neighbors with a hammer, authorities say.
WALLKILL, NY・7 HOURS AGO
News 12

An off-duty police officer was shot Saturday night while attempting to buy a car from someone he met through social media, the NYPD says. Police say the officer is in critical condition at Brookdale University Hospital. A source told News 12 that the officer is from Deer Park, Long Island.
BROOKLYN, NY・1 DAY AGO
News 12

Officer Jerry Moravek was charged with aggravated assault and official misconduct following the shooting of Khalif Cooper. Cooper was left paralyzed after the encounter.
PATERSON, NJ・3 HOURS AGO
News 12

A Stamford mom whose toddler son was found buried in a local park was arraigned Monday, but there's still little known about the case against her. Iris Rivera-Santos, 29, was arrested Friday on charges of risk of injury to a minor, hindering prosecution, tampering with evidence, and cruelty to persons in connection to her two-year-old's death. A judge has sealed her arrest warrant until Feb. 16.
STAMFORD, CT・5 HOURS AGO
News 12

A North Carolina man was sentenced to 25 years for an armed Yonkers home invasion back in 2018.
YONKERS, NY・11 HOURS AGO
News 12

According to Middletown Mayor Tony Perry, four men tried a different tactic in their attempt to steal cars Sunday morning - they rented their getaway car off an app known as Turo.
HOLMDEL, NJ・12 HOURS AGO
News 12

Police: Driver fled after striking at least 3 cars in Miller Place; no arrests

Police say the truck smashed into a wall and a basketball hoop at a neighbor's home.
MILLER PLACE, NY・14 HOURS AGO
News 12

One of the three is believed to have stolen cellphones, wallets and cash from people’s pockets inside the clubs – including Elsewhere and Avant Gardner in East Williamsburg.
BROOKLYN, NY・2 DAYS AGO
News 12

Trumbull police say at 8 p.m, Jovanie Hall, 18, of Bridgeport, drove to the mall to pick up his brothers. They say as they walked in the parking lot, Hall stabbed his 16-year-old brother.
TRUMBULL, CT・1 DAY AGO