Highlights and Recap: Syracuse Too Much For Oakland 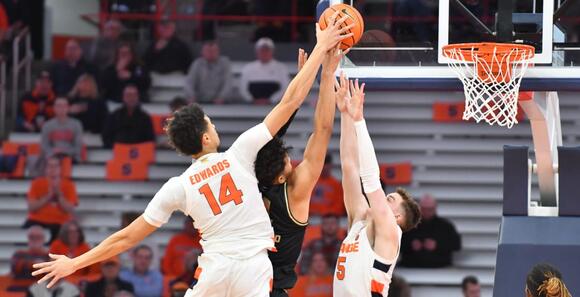 After a strong finish to the first half sent Syracuse into the break with a 45-24 lead, the Orange  dominated the rest of the game against Oakland University. Syracuse defeated the Golden Grizzlies 95-66 to improve to 5-4 on the season.

Over the final six minutes of the 1st half, Syracuse scored 18 unanswered points and increased their lead from three to 21. The Orange remained hot coming out of the half, as their lead quickly rose to 29 points by the time the under 16 minute timeout came around. Joe Girard and Jesse Edwards had both racked up 18 points by this time in the game, then gave way for the bench to come alive.

The depth of the Orange was on full display with 33 bench points, with Maliq Brown and Symir Torrence adding 12 points each. Head coach Jim Boeheim talked about Brown’s ability to be a facilitator at the power forward position.

“He's really good around the basket in that four position. We need somebody who does that,” said Boeheim.

Coach Boeheim also talked about role players Chris Bell, Benny Williams, and Justin Taylor, pointing out how those three need to be consistently better game to game. They had a combined 21 points on Tuesday night. Justin Taylor played 25 minutes tonight and could make a huge impact in future games if he is able to continue developing.

Syracuse also played exceptionally well in the paint, where 58 of their 95 points came. They beat last season’s high of 26 assists against Layfette, recording 27, showing their ability to share the ball and get quality looks for their teammates. The stingy Orange defense was able to force 14 turnovers and hold the Golden Grizzlies to 20% from beyond the arc.

Coach Boeheim also was able to send in three walk-ons for the Orange; Nico Ruffin, Anthony Clayton, and Arthur Cordes for the final five minutes of the game. Although they didn’t score any points for Syracuse, it was nice for the Orange to be able to empty their bench because of the big lead.

The Orange’s next matchup is against Georgetown at 1pm on Saturday back at the JMA Wireless Dome. This game will also feature the induction of Jim Boeheim and Dwayne “Pearl” Washington into the Syracuse Ring of Honor.

Elijah Moore Gets Syracuse Off to Nice Start in 2024

Syracuse basketball landed a commitment from 2024 shooting guard Elijah Moore out of Cardinal Hayes in the Bronx (NY). Moore is one of the best shooters in the class and chose the Orange over other finalists Alabama, Arkansas, Miami and Oklahoma State. It is the first commitment for Syracuse in the ...
SYRACUSE, NY・8 HOURS AGO
AllSyracue

How to Watch Syracuse at Virginia Tech

Syracuse women's basketball picked up a critical win over Virginia 90-72 Thursday night in the JMA Wireless Dome thanks in large part to guard Dyaisha Fair. Fair poured in a season high 36 points on an extremely efficient 11-16 shooting including 8-11 from beyond the arc. In addition, Fair added ...
SYRACUSE, NY・1 DAY AGO
AllSyracue

Syracuse football is looking for a new Director of High School Relations as Khalil Ahmad announced he is leaving the Orange. Ahmad was hired prior to the 2021 season and has extensive connections in New Jersey. He aided Syracuse's efforts in the Garden State as well as increasing the number of ...
SYRACUSE, NY・1 DAY AGO
AllSyracue

The Orange were in desperate need of a result after last night’s shocking defeat over conference foe RIT. The Tigers were able to find the back of the night FOUR times in the 1st period alone and sought out a 5-3 win over Syracuse. Fast forward 24 hours later and both teams are facing off once ...
SYRACUSE, NY・2 DAYS AGO