Definition of ‘Struggle Win’ Fits Hogs' Finally Pulling One Out 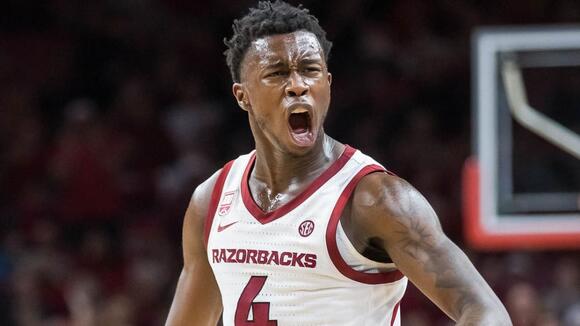 No one expected one Tuesday night, but that's what we got at Bud Walton.

FAYETTEVILLE, Ark. — Nobody expected this.

Arkansas was supposed to be able to handle North Carolina-Greensboro on Tuesday night fairly easily, but it didn't work out exactly as anybody had predicted.

It was a clear example of a "struggle win."

Even for Razorbacks coach Eric Musselman. He used the word often later.

On a night when they got one scoring weapon back, they lost another one.

Nick Smith Jr., scored 22 points (16 in the second half) but Trevon Brazile went down with some sort of apparent leg injury.

"There won’t be any update until he gets with the medical people tomorrow and they’re able to MRI it or X-ray it," Musselman said later. "On a night when we were really struggling, it certainly changed the complexion [of the game]."

For Smith it looked like he's finally finding his rhythm after missing the first few games of the regular season with a knee injury.

"Nick was really good offensively," Musselman said when the freshman got to the free-throw line 11 times. "The 11 FTAs were really important on a night that we struggled. In virtually his second game, to have 22 points is — especially when we only scored 65 ... if he doesn’t have a good scoring night, then we probably don’t win tonight."

It wasn't a one-man show.

Makhi Mitchell and Davonte Davis each had a double-double.

Arkansas overcame a tough shooting night by going 26-of-33 from the free throw line, including 23-of-27 in the second half. Smith led the way at the line by making 9-of-11.

Smith’s biggest contribution came with 1:30 left in the game when he had a steal, took the ball coast-to-coast and finished with an old-fashion 3-point play to put the Razorbacks up seven.

However, it was Anthony Black’s two clutch 3-pointers that spurred the Razorbacks to the win. First, he capped an 8-0 run to put Arkansas on top, 34-33, early in the second half.

Later, with 3:09 to play, Smith found Ricky Council IV who quickly swung the ball to an open Black on the right wing to put the Hogs up 54-49. Black finished with 11 points.

The Razorbacks were down at halftime and trailed with five minutes to play but outscored the Spartans 17-9 over the final five minutes, holding UNCG to 1-of-8 shooting at one point.

UNCG was able to stay in the game thanks to making nine 3-pointers, including four from Donovan Atwell for a team-high 12 points. Dante Treacy and Kobe Langley added 11 and 10 points, respectively.

For the Razorbacks, Mitchell posted his ninth career double-double – and first at Arkansas – with his 13 points and 14 rebounds (all on the defensive end). He additionally accounted for four of Arkansas’ nine blocked shots.

Up next, Arkansas will play back-to-back games on neutral floors. First, the Razorbacks will be the home team in the second annual Crimson and Cardinal Classic on Saturday (Dec. 10) versus Oklahoma in Tulsa’s BOK Center.

Tipoff is set for Noon and the game will be televised on ESPN2. The following Saturday (Dec. 17),

Arkansas will make its annual trip to North Little Rock to host Bradley at Simmons Bank Arena. Tipoff is set for 3 p.m.

• Arkansas went scoreless for over eight minutes while UNCG went on an 11-0 run.

• Nick Smith Jr. started the second half by draining the team’s first 3-pointer of the game.

• Smith helped put the game away with a steal and old-fashion 3-point play with 129 left for a seven-point lead.

• Smith, Black and Council each played all 20 minutes of the second half. The trio plus Davis were each +12 in the second half as the Razorbacks outscored the Spartans 44-32.

• Mitchell had six points and seven rebounds in the second half.

• Council scored all eight of his points in the second half thanks to a 6-of-6 performance at the free throw line.

• UNCG’s Keyshaun Langley scored the game’s first points, a 3-ponter at 19:23. Arkansas’ first points were a Makhi Mitchell alley-oop dunk from Smith at 18:38.

• Trevon Brazile was the first Razorback sub for the ninth straight game.

• Trevon Brazile left the game midway through the first half with a right knee injury.

• This marked the first game Ricky Council IY, the SEC’s leading scorer, did not score in double digits, finishing with eight points.

• Arkansas is now 5-31 in the shot clock era when scoring less than 22 points in the first half and trailing at the break. All five wins came in Fayetteville (four in Bud Walton and one in Barnhill).

• A top-25 Arkansas team is 11-4 all-time when trailing at the half to unranked teams, including a 5-0 record under head coach Eric Musselman.

Don't be surprised to see Makhi and Mekhel Mitchell to handle Oscar Tshiebwe.
FAYETTEVILLE, AR・16 HOURS AGO
All Hogs

Razorbacks will need to be able to hold serve in Bud Walton and steal a road win against a daunting final stretch of the season
FAYETTEVILLE, AR・20 HOURS AGO
All Hogs

Five-star signee took to Instagram almost immediately after loss, also hinted at whether there will be a possible rematch with Davis next season
FAYETTEVILLE, AR・18 HOURS AGO
All Hogs

This Time, Breaks Go For Razorbacks at End of Game