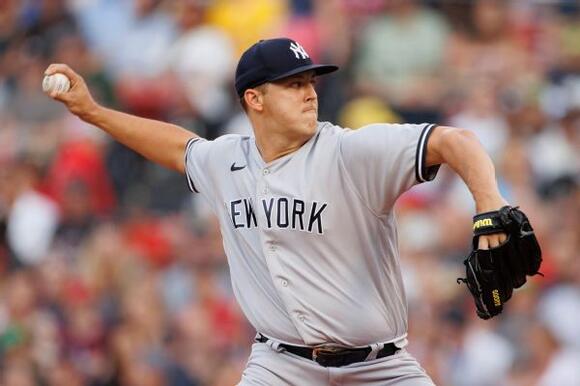 Taillon, 31, was among the top pitchers remaining in free agency and is the latest big acquisition for the Cubs, who earlier Tuesday reached a one-year, $17.5 million agreement with slugger Cody Bellinger , sources told Passan.

A hard-throwing right-hander, he has bounced back since arriving in the Bronx in a January 2021 trade with the Pittsburgh Pirates , returning to form after making just seven starts in 2019 and missing all of 2020 after undergoing Tommy John surgery.

He fits into the Cubs' rotation with veterans Marcus Stroman and Kyle Hendricks along with young pitchers Justin Steele and Keegan Thompson . Hendricks' 2022 season ended early because of a slight tear in his pitching shoulder, so adding Taillon provides further depth. The Cubs also re-signed righty Adrian Sampson and have Hayden Wesneski , a July addition from New York.

Pitcher Max Fried lost to the Braves in salary arbitration on Saturday, and will make $13.5 million in the upcoming season instead of his $15 million request.
ATLANTA, GA・2 DAYS AGO
ESPN

Baltimore Orioles CEO John Angelos and his brother Lou have agreed to end their fight over a lawsuit in which Lou accused John of seizing control of the team in defiance of their father Peter's wishes.
BALTIMORE, MD・2 HOURS AGO
ESPN

Ian Kinsler back with Rangers as special assistant to GM

Former Rangers second baseman Ian Kinsler has returned to the team as a special assistant to general manager Chris Young.
5 HOURS AGO
ESPN

The Washington Nationals avoided arbitration with outfielder Victor Robles, agreeing Monday to a one-year contract worth $2,325,000 as part of a deal that includes a club option for 2024.
WASHINGTON, DC・6 HOURS AGO
ESPN

The Minnesota Twins and Carlos Correa made a mutual decision that the shortstop will skip the World Baseball Classic for family reasons, with his wife expecting a baby during the tournament.
MINNEAPOLIS, MN・6 HOURS AGO
OnlyHomers

World Wrestling Entertainment (WWE) star Hulk Hogan is "paralyzed" from the waist down, at least according to another legendary wrestler, it has been revealed. Kurt Angle, speaking on an episode of his top-rated podcast on Sunday, said that he and Hogan, 69, spoke backstage when they both appeared at the 30th Anniversary special for WWE’s program “Monday Night Raw.”
1 DAY AGO
ESPN

Guard Furkan Korkmaz has requested a trade from the 76ers, sources confirmed to ESPN.
PHILADELPHIA, PA・4 HOURS AGO
ESPN

Blackhawks star Patrick Kane said Monday he has had discussions with his agent about teams interested in trading for him, but has yet to decide whether he'll waive his no-movement clause.
CHICAGO, IL・2 HOURS AGO
ESPN

Wide receiver A.J. Green announced his retirement Monday. The 34-year-old played 11 seasons in the NFL, spending the first nine in Cincinnati and his final two in Arizona.
CINCINNATI, OH・6 HOURS AGO