The Comeback is sports and pop culture blog committed to quality content, storytelling, and reporting, but we also like to have fun as well. With over 20 writers, the site now reaches over 25 million people a month. 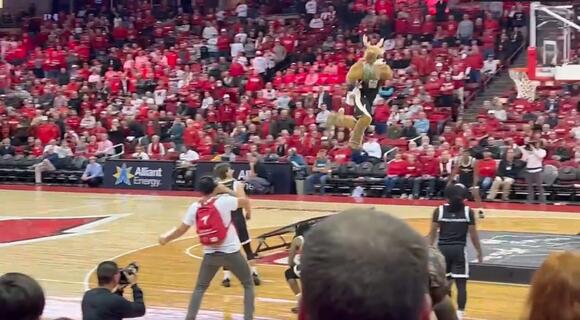 The Wisconsin Badgers took on the Maryland Terrapins in college basketball on Tuesday night, but the action between the two teams was paused briefly after a hilarious moment involving the Milwaukee Bucks ‘ mascot named “Bango”.

The game took place at the Kohl Center in Madison, WI, and Bango took part in a special halftime show where he was asked to do a dunk off a trampoline.

It went exactly to plan, except for the fact that the dunk was so powerful that it significantly bent the rim.

Perhaps an even better moment occurred after the dunk, where Bucko acted out the classic “Jordan shrug” after the incident.

This is certainly one of the best mascot moments in recent college basketball memory, and many laughed about the situation on social media.

The incident caused halftime to be delayed, but it certainly seems like the entertainment from the dunk was worth it for most fans.

Luckily they were able to replace the rim in a timely manner and finish out the game, with Wisconsin coming away with a 64-59 victory .

The whole situation was certainly wild considering college players dunk all the time in games, but this dunk from a mascot happened to break the rim.

While some college basketball fans may have seen this incident as an inconvenience for the delay in the action, most see this as a hilarious moment that is extremely uncommon coming from a mascot.

The Milwaukee Bucks didn’t waste much time getting going during Friday’s road game against the Indiana Pacers. The Bucks scored 45 points in the opening quarter and 85 over the first two. In doing so, Milwaukee made NBA history. Prior to Friday, the Bucks were last on the road on Monday against the Detroit Pistons. Read more... The post Bucks make NBA history in Friday’s game vs. Pacers appeared first on The Comeback: Today’s Top Sports Stories & Reactions.
MILWAUKEE, WI・1 DAY AGO
The Comeback

Alex Colomé, once one of baseball’s best relievers, has a new team. The 2016 American League All-Star and 2017 American League saves leader with the Seattle Mariners, has signed with the Washington Nationals. Mark Zuckerman of MASNsports.com reported the news on Twitter. Nationals have signed reliever Alex Colomé to a minor league deal with an Read more... The post Nationals sign former All-Star, saves leader appeared first on The Comeback: Today’s Top Sports Stories & Reactions.
WASHINGTON, DC・1 DAY AGO
The Comeback

As the Baltimore Ravens look to replace offensive coordinator Greg Roman, who the organization recently parted ways with, it appears that head coach John Harbaugh is yet again dipping into the college ranks. According to NFL insider Tom Pelissero of NFL Network, the Ravens interviewed the University of Georgia offensive coordinator Todd Monken for their Read more... The post Ravens interview national championship-winning coordinator appeared first on The Comeback: Today’s Top Sports Stories & Reactions.
BALTIMORE, MD・1 DAY AGO

The Comeback is sports and pop culture blog committed to quality content, storytelling, and reporting, but we also like to have fun as well. With over 20 writers, the site now reaches over 25 million people a month.