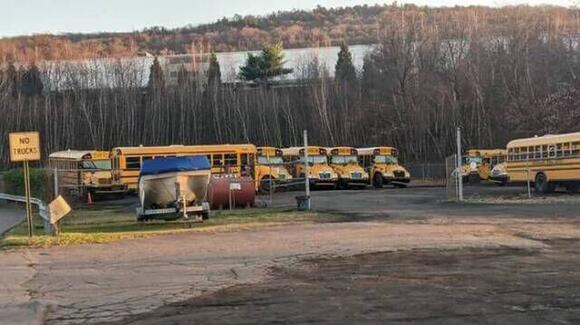 HA Hanover Holdings LLC, a for-profit company providing transportation services for the Hanover Area School District, has intervened in a lawsuit against the Hanover Township Zoning Board.

The bus depot began operating at the 1.7-acre site that once was a storage yard for motor homes and boats several weeks before the zoning board granted approval.

The zoning board following a public meeting Sept. 20 voted 3-2 to grant HA Hanover Holdings a “non-conforming use” to operate the bus depot and to construct a garage larger than the current building at the site.

According to a transcript of the public meeting, many residents spoke about dust, increased traffic and noise that begin at 6 a.m. until midnight. Pictures of a “dust bomb” caused by a single bus leaving the property were shown to the zoning board during the public meeting.

One neighbor told the zoning board their “peace and joy” in the neighborhood has been taken away by the beeping noises of reversing buses.

Richard Andrejko, a principal with HA Hanover Holdings, said during the public meeting that buses would not create dust, pollution or excessive noise. Andrejko said he plans to re-configure the property to have buses pull into the depot from a rear entrance to avoid backing up.

HA Hanover Holdings, of 239 Old River Road, Wilkes-Barre, the same building that houses Martz Trailways, is purchasing the 1.7-acre site for $370,000, according to an exhibit filed with the public meeting transcript.

According to the township zoning ordinance enacted in June 2016 and amended in August 2020, the zoning board can issue special exceptions to change a non-conforming use if six standards are met. Two of the six standards say no increase in traffic causing congestion and no increase in noise, smoke, dust, fumes, vapors and vibrations.

The zoning board held the Sept. 20 meeting based on an appeal HA Hanover Holdings filed when the township code enforcement office on Sept. 7 denied their application to operate the bus hub.

WHITE HAVEN — A man from Freeland was arraigned Thursday on allegations he robbed the Exxon Mobil service station in White Haven, his se
WHITE HAVEN, PA・11 HOURS AGO
Times Leader

WILKES-BARRE — A man from Plymouth claimed he had the right to fire a warning shot because it was “in the bylaws.”
PLYMOUTH, PA・11 HOURS AGO
Times Leader

Over 800 PPL customers in Luzerne County without power

Nearly 900 customers around Luzerne County were without power at one point Wednesday evening, according to the PPL Electric website.
LUZERNE COUNTY, PA・1 DAY AGO
Times Leader

25 finalists, 3 alternates chosen for Luzerne County and Beyond Got Talent

The committee for Luzerne County and Beyond Got Talent 2023 has announced the 25 finalists who will showcase their skills on March 26 at the F
LUZERNE COUNTY, PA・20 HOURS AGO
Times Leader

A question on whether to reconsider Luzerne County’s home rule government won’t be placed on the May 16 primary election ballot, a
LUZERNE COUNTY, PA・2 DAYS AGO
Times Leader

WILKES-BARRE — An autopsy on the body of an inmate at Luzerne County Correctional Facility revealed she took her own life. Di
LUZERNE COUNTY, PA・3 DAYS AGO
Times Leader

Luzerne County Election Board member Danny Schramm said Monday he has requested a special meeting to withdraw his support for a recent change
LUZERNE COUNTY, PA・3 DAYS AGO
Times Leader

Tired of ads? Subscribers enjoy a distraction-free reading experience. While most of the Wyoming Valley was spared from significant snow totals and hazardous conditions after Wednesday morning’s snowfall, many events around Luzerne County were still canceled or moved back out of an abundance of caution. The National Weather Service’s...
LUZERNE COUNTY, PA・2 DAYS AGO
Times Leader

KINGSTON — A Page Avenue home in the process of being renovated caught fire on Tuesday afternoon. Crews from Kingston/Forty-Fort and Edwardsville were called to fight a working fire at 155 Page Ave. in Kingston around 3 p.m. Tuesday. Kingston/Forty-Fort fire chief Frank Guido said that initial responders encountered...
KINGSTON, PA・3 DAYS AGO
Times Leader

Porfirio resigns from Wyoming Area board

EXETER — Paul Porfirio submitted his letter of resignation from the Wyoming Area School Board to be considered at Tuesday’s monthl
WYOMING, PA・2 DAYS AGO
Times Leader

It’s ironic that for over 40 years I never penned a letter to the editor, yet this is now my second in three months. Maybe it
LUZERNE COUNTY, PA・3 DAYS AGO
Times Leader

Tired of ads? Subscribers enjoy a distraction-free reading experience. Graduates of Penn State Hazleton’s practical nursing program marked the successful completion of the program during a ceremony on Friday, Dec. 19, in the Dr. Thomas M. Caccese Gymnasium in the Physical Education Building. The class of 22 students completed...
HAZLETON, PA・2 DAYS AGO
Times Leader

Tired of ads? Subscribers enjoy a distraction-free reading experience. Interstate 81 southbound will be closed tonight, Jan. 26, from 8 p.m. to 5 p.m. between Exit 178 (Avoca) to 175 (Dupont/Pittston) to remove beams from the Suscon Road Bridge. The detour will be as follows:. Take Exit 178 (Avoca) to...
PITTSTON, PA・1 DAY AGO