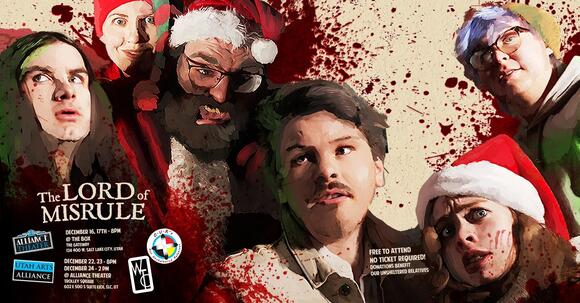 The Lord of Misrule is a donation-based play produced by the Wasatch Theatre Company to help Our Unsheltered Relatives during this holiday season.

The play is inspired by a real Christmas tradition that started in ancient Rome when Christmas was Saturnalia. A beggar would be crowned the Lord of Misrule, who would then preside over drunken mobs and Christmas parties.

“We wanted [the play] to be inspired by this local tradition of reclaiming Christmas for people who are homeless or in poverty — the people who need Christmas the most,” RJ Walker, the producer and playwright of The Lord of Misrule , said.

The Christmas play is about a corrupt Televangelist Lucas Karol who heals the “sick,” performs “exorcisms,” and also collects donations from his followers for these miracles on his daytime TV show, Scriptures Unscripted .

As the pastor performs a version of A Christmas Carol that reinforces society to give him money, a rowdy mob — the audience — hijacks the show. The pastor, his wife, and his special guests are forced to obey the orders of the Lord of Misrule who is leading the mob while performing their Christmas pageant.

The show is free for all to attend, and any money you do choose to donate to Our Unsheltered Relatives will directly impact the play by how the actors perform in the show.

With enough donations, one character could be forced to maintain a half-squat the entire performance, another you can make eat a habanero pepper, and more. As more and more of these challenges are piled onto the characters, more of their real personalities rise to the surface.

“The show is absolutely ridiculous. If I had to liken it to anything, I would say it’s a cartoon,” Walker said.

The play is showing at two locations:

SALT LAKE CITY (ABC4) – Gov. Spencer Cox recently gave his State of the State address, but it’s obvious he didn’t know that Utah would find itself in such an icy grip after his talk. Since the 19th of January, few locations in the state have made it to normal average temperatures, and it looks like […]
UTAH STATE・1 DAY AGO
ABC4

SALT LAKE CITY, Utah (Good Things Utah) – Winter weather can be harsh on our hair. But with the right care, you can avoid the dry, itchy cold weather hair woes. We brought in the expert, Steven Robertson, co-owner of 1 Salon for some advice on how to take care of dry hair and scalp […]
SALT LAKE CITY, UT・21 HOURS AGO
ABC4

With temperatures dropping into the 20s in recent days, homeless advocates are furious with Salt Lake City officials after they reportedly removed several tents in the downtown area without notice on Tuesday, Jan. 24.
SALT LAKE CITY, UT・1 DAY AGO
ABC4

An immersive art museum has moved to a new location in Sandy for an exhibit that is five times larger than the last.
SANDY, UT・3 DAYS AGO
ABC4

One of her most notable announcements includes a historic $100 million fundraising initiative for the Ballpark neighborhood led by the Larry H. and Gail Miller Family Foundation, the city, Zions Bank and Intermountain Health.
SALT LAKE CITY, UT・22 HOURS AGO
ABC4

Utah is now seeing some of the coldest temperatures since just before Christmas time.
UTAH STATE・2 DAYS AGO
ABC4

The Park City Police Department is asking the public for help in locating a bronze statue of a bear holding a coffee mug on Monday, Jan. 23.
PARK CITY, UT・2 DAYS AGO
ABC4

Mayor Erin Mendenhall is expected to unveil her goals and plans for the future of Salt Lake City during the 2023 State of the City Address at 6 p.m. on Tuesday, Jan. 24.
SALT LAKE CITY, UT・1 DAY AGO
ABC4

Salt Lake City Mayor Erin Mendenhall has recently appointed Damian Choi to serve as the Chief Equity Officer, who will lead the City's efforts in championing diversity across all its policies and programs.
SALT LAKE CITY, UT・3 DAYS AGO
ABC4

Police are cracking down on bath salt trafficking and warning the public of the dangers of the drug, according to a press release.
SALT LAKE CITY, UT・1 DAY AGO
ABC4

SALT LAKE CITY (ABC4 Sports) – The Utah gymnastics team found out why Oklahoma is the top-ranked team and defending national champions. The 5th-ranked Red Rocks struggled to find momentum throughout the night, ultimately falling at #1 Oklahoma on Sunday night 197.925-197.275. Utah got off to a slow start on bars, causing the Red Rocks […]
SALT LAKE CITY, UT・3 DAYS AGO
ABC4

The Salt Lake City Police Department has arrested the suspect involved in an aggravated rape case that occurred in Taylorsville earlier this month.
TAYLORSVILLE, UT・2 DAYS AGO
ABC4

A 14-year-old girl was kidnapped, taken to an Airbnb, and ultimately saved by the SafeUT app early Saturday morning, according to Salt Lake City Police.
SALT LAKE CITY, UT・3 DAYS AGO
ABC4

A shooting in Ogden left two people hospitalized early Sunday morning in what was a "likely targeted" incident, according to the Ogden Police Dept.
OGDEN, UT・3 DAYS AGO
ABC4

This weekend, dozens of riders from across the country will compete in the first annual Nordic Valley Ski Bike Festival.
EDEN, UT・5 DAYS AGO
ABC4

A 66-year-old man has been pronounced dead after a head-on crash with a semi-truck on Tuesday.
BLACKFOOT, ID・2 DAYS AGO