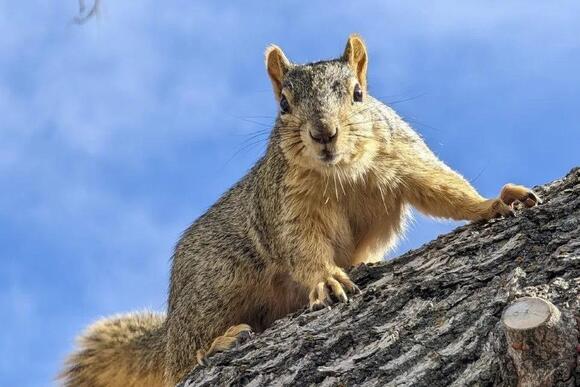 SALT LAKE CITY ( ABC4 ) — As part of its week-long Squirrel Fest , the Natural History Museum of Utah is urging the community to help local biologists in their study of fox squirrels.

The third annual Squirrel Fest runs from Dec. 3 to Dec. 11. Utahns can help track the distribution of squirrels in the state by observing their own environment and completing a survey that lets the museum know if there are any squirrels at a designated location. The survey can be completed on mobile phones and computers .

“The fox squirrel data has allowed us to study how a non-native species becomes established in a new environment. In six years, fox squirrels have increased their range along the Wasatch Front and continue to adapt to the urban environment,” said Eric Rickart, NHMU’s curator of vertebrates.

The first sighting of a fox squirrel in Utah was in 2011 along the Jordan River in Salt Lake City. Led by Rickart and Ellen Eriksson, the museum’s Citizen Science program manager, this study will give biologists a chance to monitor fox squirrels in Utah and increase their understanding of how these creatures interact with the environment.

Information provided by the survey will answer questions such as: “What do these squirrels eat?” “What other species do they interact with?,” or “Where in Utah are fox squirrels present and not present?”

But what is the best way to observe squirrels for this survey? The museum recommends the following steps:

According to the museum, Squirrel Fest operates much like the Christmas Bird Count the American Audubon Society has been hosting for the past 100 years.

The survey has amassed enough data over the past years to formulate a map of all squirrel sightings in northern Utah. In 2021, community members contributed more than 450 observations. Rickart said these data contributions from Utahns, who the museum calls “Citizen Scientists,” are a valuable part of his research.

WHAT ARE FOX SQUIRRELS?

Fox squirrels, also known as the eastern fox squirrel and Bryant’s fox squirrel, are the largest tree squirrel native to North America, especially the eastern and central parts of the U.S. They have gray-and-orange backs and undersides that range from pale yellow to bright orange. Their tails are bushy and long, making their total height anything between 18 to 28 inches.

These tiny mammals spend most of their days eating and gathering food, traveling along power lines and between bushes to get to where they need to go. They are agile climbers who live in trees and build caches to store food like nuts because they don’t spoil as easily.

In comparison, Utah’s native squirrel species are much smaller. The American Red squirrel grows to be about 12 to 16 inches tall. They have pale undersides and reddish-brown backs. The Rock squirrel may be about the same size as a fox squirrel, but its entire body is gray in color with yellow and brown highlights.

With the near-constant stream of snowstorms coming through our mountains, the numbers keep going up and up.
UTAH STATE・14 HOURS AGO
ABC4

A herd of elk caused a little bit of traffic trouble Thursday afternoon when they congregated right next to Interstate 80 and later ran across Foothill Drive.
UTAH STATE・2 HOURS AGO
ABC4

By tomorrow, the weather pattern will become more active in the northern half of the state as we see a series of systems move our way. Between Friday and Saturday, we'll have a chance for isolated to scattered showers with most of the wet weather being snow.
UTAH STATE・6 HOURS AGO
ABC4

SALT LAKE CITY, Utah (Good Things Utah) – Winter weather can be harsh on our hair. But with the right care, you can avoid the dry, itchy cold weather hair woes. We brought in the expert, Steven Robertson, co-owner of 1 Salon for some advice on how to take care of dry hair and scalp […]
SALT LAKE CITY, UT・1 DAY AGO
ABC4

One of her most notable announcements includes a historic $100 million fundraising initiative for the Ballpark neighborhood led by the Larry H. and Gail Miller Family Foundation, the city, Zions Bank and Intermountain Health.
SALT LAKE CITY, UT・1 DAY AGO
ABC4

How California, Arizona and other states are trying to generate a whole new water supply

If implemented on a wide enough scale, recharge projects hold the potential to bolster water security in drought-stricken regions while improving the health of the environment.
ARIZONA STATE・3 DAYS AGO
ABC4

With temperatures dropping into the 20s in recent days, homeless advocates are furious with Salt Lake City officials after they reportedly removed several tents in the downtown area without notice on Tuesday, Jan. 24.
SALT LAKE CITY, UT・2 DAYS AGO
ABC4

Light snow showers and very cold temperatures are in store today as another trough of low-pressure slides through the Beehive State.
UTAH STATE・4 DAYS AGO
ABC4

A Utah man is facing 11 charges after allegedly causing a multi-car wreck on Interstate 80 that led to the deaths of five Arkansas students on Sunday, Jan. 22.
SHERWOOD, AR・4 HOURS AGO