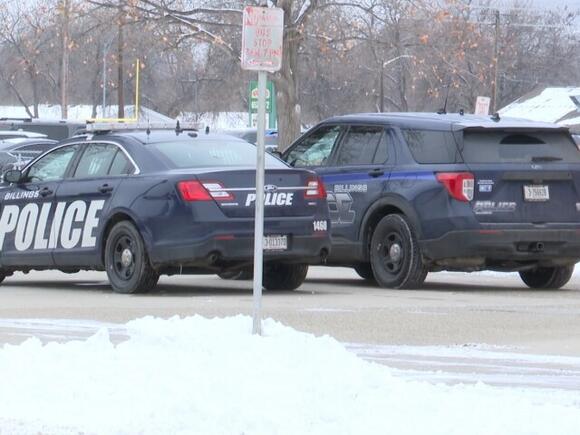 Multiple threats written inside bathroom stalls at Billings West High School have prompted parents to keep their children home from school on Wednesday.

Concerned parents took to social media on Monday to voice their concerns.

“We are going to be keeping him home tomorrow because I am not completely satisfied with the response from the school district. All they’ve said is that they haven’t substantiated the threat, however, there will be extra police presence, and that’s all we’ve heard,” said Shelley Solomon, a mother of a 15-year-old West student, on Tuesday. “It bothers me as a parent, it bothers my child, and I kind of just want answers.”

Solomon explains that after a threat in early November toward West , she reached out to the school for more information, but did not get a response. But her question list is growing.

“I’ve heard that Superintendent (Greg) Upham was offered metal detectors, free of charge, and that was declined, and I would kind of like to know why,” Solomon questions.

She would like to see more transparency from the school district.

“I would like to see more transparency. More updates. I realize there’s that saying no news is good news, but when it’s something like this where there’s a swastika and a threat, it’s concerning to me, and the lack of transparency is really concerning,” Solomon explains. "I know resources are low everywhere, but maybe have more school resource officers."

The first threat included a swastika above its menacing message.

But even if these threats were just a hoax, Cherilyn DeVries from the Montana Human Rights Network explained Tuesday how harmful these messages can be.

“This causes real fear in communities that face discrimination and marginalization and oppression on a regular basis,” DeVries explained. “It’s really important for schools to make sure that this kind of stuff isn’t just normalized, or put into a ‘kids will be kids’ type situation."

DeVries also explained that violent messages are on the rise across the country, not just in Montana.

“Over the past five or six years, extremist rhetoric, antisemitism, racism, and so on has become really normalized, not just in Montana but across the whole country,” DeVries said. “We’re seeing more of this in younger groups because we know that extremist groups are specifically trying to radicalize and recruit teens and people in their 20s and 30s ongoing. It’s really important that students know that this is not acceptable because it makes people unsafe."

Other parents have indicated on social media they plan to keep their kids home Wednesday, but the total number of absences will be determined on Wednesday.

MTN reached out to West High Principal Kelly Hornby by email and Upham by email and phone on Tuesday for comments but has not heard back.

"Just the lack of response from the last threat, and now this, we’ve just decided that we’re going to keep him home tomorrow,” Solomon explains. "I don’t know what the answer is as a parent, but I think the biggest thing would be the communication part."

we need to do something before it gets any worse! Come on parents, grandparents anyone with children in SD2 LET'S DO THIS TOGETHER AND MAKE OUR SCHOOLS A SAFE PLACE FOR THE CHILDREN TO LEARN! IT TAKES ALL OF US!!

Maybe all the children should stay hm on Wednesday just a thought 🤔 I realize parents have to work and teachers need to teach but CHILDREN NEED TO FEEL SAFE!

Free metal detectors and turned down??? wth...that should've been jumped on to take that opportunity

Billings patrol officer talks crime and the code of the job

He tries to maintain professionalism, something he talks about quite a bit when asked about how he deals with the public and sometimes those who target police.
BILLINGS, MT・13 HOURS AGO
Q2 News

Have a Billings address? Booking some local hotels may be an issue

While some hotels have a policy in place and show a sign on the front door stating they will no longer book local residents, other hotels practice heavy caution who they book to.
BILLINGS, MT・10 HOURS AGO
Q2 News

Here in Billings, that growth was closer to 1%, but Dannenberg is optimistic. He’s a fourth-generation scouter and has worked professionally with the group since 2005.
BILLINGS, MT・11 HOURS AGO
Q2 News

The Layhers were leaving Pizza Ranch on Dec. 27 when their SUV was struck by a speeding vehicle on Main Street, causing their vehicle to roll. The mother, Jessica, was just released from the hospital.
BILLINGS, MT・1 DAY AGO
Q2 News

The moose wandered into Billings in early September and was euthanized by Fish, Wildlife and Parks on Dec. 1 after appearing to be injured.
BILLINGS, MT・9 HOURS AGO
Q2 News

At Q2, we’re proud to be a part of the 'If You Give A Child A Book' campaign where your donations help get books into the hands of every kid.
HARDIN, MT・5 DAYS AGO
Q2 News

A man prosecutors say was shot by a woman during an attempted robbery in a Billings alley was arraigned Wednesday in Yellowstone County District Court.
BILLINGS, MT・18 HOURS AGO
Q2 News

Their mailbox is on the side of their home, down the driveway. While the fence is closing off all of their front yard.
BILLINGS, MT・1 DAY AGO
Q2 News

The citation was filed on Jan. 27 after code enforcement officers spent months trying to contact and work with owner John Skauge on issues plaguing the property at 223 S. 27th St.
BILLINGS, MT・12 HOURS AGO
Q2 News

Adult education counselor receives 'One Class at a Time' award

Jesse is the lead counselor who is passionate about the students and staff at the Billings Adult Education Program in the Lincoln Center
BILLINGS, MT・5 DAYS AGO
Q2 News

Q2 Billings Area Weather: A shot of showers and snow

Tony Seitz started crafting unique beehive boxes after taking up beekeeping with his son. He has been retired since 2009 and enjoys creating the colorful boxes as a hobby.
BILLINGS, MT・7 DAYS AGO
Q2 News

The Montana Women’s Run began in 1982 with 200 registrants and celebrated last year with over 4,600 women participating virtually around the world.
BILLINGS, MT・6 DAYS AGO
Q2 News

Strong winds continue west of Yellowstone County on what will be another dry day. Chance of precipitation tomorrow as a cold front moves through.
BILLINGS, MT・1 DAY AGO
Q2 News

“All of sudden it was this big explosion in the sky and all this debris started slowly coming down like it was big smoke," she said.
BILLINGS, MT・5 DAYS AGO
Q2 News

Winds spread from the mountains and foothills west of Billings to across the eastern plains. Showers follow a cold front.
BILLINGS, MT・1 DAY AGO