Syracuse Dominant on Both Ends in Blowout of Oakland 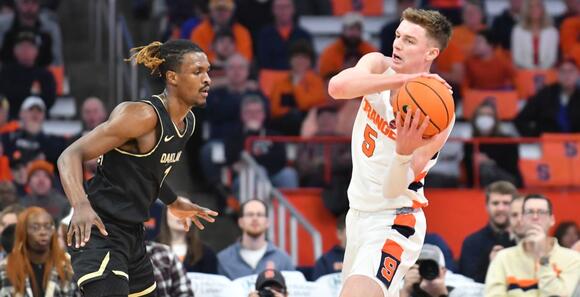 Syracuse basketball used an 18-0 run at the end of the first half to spark a blowout 95-66 win over Oakland. With the victory, Syracuse improves to 5-4 (1-0) on the season while the Golden Grizzlies dropped to 2-9. Next up for SU is Georgetown in the Dome on Saturday.

Most of the first half was tightly contested, with Oakland staying within three points until the final six minutes. Over those six minutes, Syracuse went on an 18-0 run, sparked by eight points from guard Joe Girard. That gave the Orange a 21 point halftime lead, and that lead would only swell throughout the second half.

Just days after Jesse Edwards and Girard led the way to an Orange victory on the road, they did so at home. Edwards and Girard each had a team high 18 points. Edwards added seven rebounds and two blocks while Girard notched six assists. Girard went 7-10 from the floor and 4-7 from three while Edwards was a perfect 9-9 from the field.

Symir Torrence and Maliq Brown each had 12 points off the bench as they saw extended minutes in the second half. Brown added seven rebounds while Torrence dished out five assists. John Bol Ajak was, once again, a factor off the bench with two points, six rebounds and three assists. Benny Williams had nine points and six boards, while Judah Mintz added 10 points and five assists.

Oakland was led by Trey Townsend, who scored a game high 29 points and 12 rebounds.

Despite that effort from Townsend, the Orange was in control throughout and dominated on the glass 44-33. Syracuse shot 58% from the floor compared to just 38% from Oakland thanks to an active Orange zone. Syracuse even shot well from three point range, making 40% of its outside shots compared to just 20% from the Golden Grizzlies.

Syracuse forward Benny Williams "took a personal day" according to head coach Jim Boeheim, which led to him not being at the JMA Wireless Dome for the Orange's 67-62 loss against #7 Virginia. Boeheim added that Williams will be back at practice on Wednesday.   Williams began the season as ...
SYRACUSE, NY・11 HOURS AGO
AllSyracue

Syracuse, Pittsburgh to be Played at Yankee Stadium

Syracuse football's 2023 schedule was released as part of the ACC's schedule reveal Monday night. While the opponents were previously known, the dates and order was not. The schedule is as follows: Note: All caps denotes home game in the JMA Wireless Dome.   Saturday, September 2nd: ...
SYRACUSE, NY・13 HOURS AGO
AllSyracue

Virginia’s seventh straight win would mean Syracuse’s third straight loss. Head Coach Jim Boehem says the team played their best game of the season by holding the seventh-ranked team in the country to just a five-point difference, losing 67-62. “Virginia is really good. They beat us just like they ...
SYRACUSE, NY・2 HOURS AGO