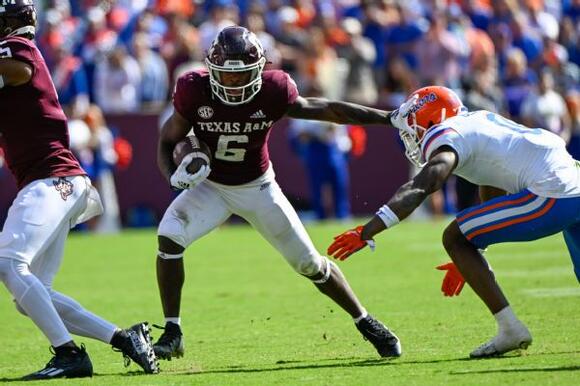 Texas A&M running back Devon Achane has declared his intention to enter the 2023 NFL draft, he announced Tuesday on Instagram.

Achane, a junior, is rated as the No. 3 draft-eligible running back for 2023 by ESPN's Mel Kiper and Todd McShay, and Scouts Inc. lists him as the No. 48 overall prospect for the draft.

In his Instagram post , Achane thanked the "12th man," adding, "It's a blessing to have been part of this great university."

Achane rushed for 1,102 yards and eight touchdowns on 196 carries this season. He also handled kickoff returns for Texas A&M and had a return touchdown for the second straight season. He finished his Aggies career with 2,376 rushing yards and 21 touchdowns, and 554 receiving yards and five receiving touchdowns.

Achane was a bright spot in a disappointing Aggies season, eclipsing 120 rushing yards in his final three games. In an upset victory over LSU in Texas A&M's finale, he recorded career highs in both carries (38) and rushing yards (215) and scored two touchdowns.

The Buffalo Bills are coming off a disappointing end to their season, losing 27-10 at home against the Cincinnati Bengals in the AFC Divisional round in the playoffs. Entering the offseason, the Buffalo Bills have started looking toward the future and made the tough decision to fire one of their long-tenured coaches.
12 HOURS AGO
Page Six

Dallas Cowboys quarterback Dak Prescott and Natalie Buffett have broken up after two years of dating, Page Six can exclusively reveal. Multiple sources confirm the longtime couple actually split around March 2022 but have kept it close to the vest. We’re also told Prescott has been casually dating. Reps for the former couple didn’t immediately return Page Six’s request for comment. The athlete, 29, and Buffett, 25, began dating sometime in 2020 based on social media photos, though it’s unclear exactly when they became official. She posted their first picture together in honor of his 27th birthday, captioning the outdoorsy shot at the...
1 DAY AGO
ESPN

Jessie Lemonier, who appeared in seven games with the Lions in 2021 and recently signed with the USFL, has died at the age of 25, the team announced.
DETROIT, MI・13 HOURS AGO
ESPN

Before he backed up Davis Webb at Texas Tech, and then Alex Smith with the Kansas City Chiefs, Patrick Mahomes duked it out with his best friend in what might be the most important quarterback competition in football history.
WHITEHOUSE, TX・16 HOURS AGO
ESPN

The Carolina Panthers have agreed to hire Frank Reich as their new head coach, the team announced Thursday.
CHARLOTTE, NC・9 HOURS AGO
ESPN

Johnson hasn't given up a sack in more than two seasons, but he came close to leaving football behind at the peak of his dominance.
PHILADELPHIA, PA・16 HOURS AGO
93.7 The Fan

Listen to the entire Art Rooney media session including some non-Matt Canada thoughts-the future of the Steelers way, what he thought of the 2022 season
PITTSBURGH, PA・50 MINUTES AGO
ESPN

Bengals cornerback Mike Hilton has dubbed the Chiefs' stadium "Burrowhead" ahead of the AFC Championship Game on Sunday.
CINCINNATI, OH・9 HOURS AGO
ESPN

Two of the Bengals' top offensive linemen did not practice Wednesday with lingering injuries and their status for the AFC Championship Game remains up in the air.
CINCINNATI, OH・1 DAY AGO
ESPN

Who will be college football's best player in 2023? Can Caleb Williams repeat as Heisman? Our reporters highlight who's worth watching next season.
COLORADO STATE・16 HOURS AGO
ESPN

The NFL is expanding its partnership with the Players Coalition to address issues of racial and social justice with a five-year extension and a $15 million grant through its Inspire Change initiative.
NEW YORK STATE・8 HOURS AGO
ESPN

Who will be named the MVP of the 2022 NFL season? Our expert panel voted on the top candidates, including four quarterbacks and a standout receiver.
KANSAS CITY, MO・17 HOURS AGO
ESPN

The Lady Vols' long, slow climb back to greatness and the struggle to uphold a legacy

Tennessee opened the season ranked fifth and it was Final Four or bust. Then it all unraveled. And history and expectations might be harder to overcome than injuries and the nation's toughest schedule.
KNOXVILLE, TN・15 HOURS AGO
ESPN

Bill O'Brien will return to the Patriots after agreeing to a deal Tuesday to become New England's next offensive coordinator, sources told ESPN's Adam Schefter and Chris Low.
ALABAMA STATE・2 DAYS AGO
ESPN

The wrestling promotion signed 15 college athletes to their "Next In Line" program on Thursday.
GEORGIA STATE・14 HOURS AGO