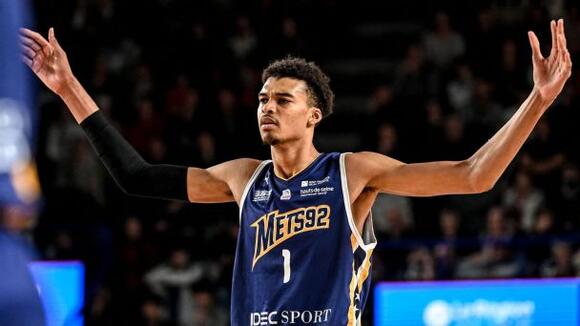 Victor Wembanyama, a 7-foot-4 NBA draft prospect, keeps displaying why he is projected to go No. 1 overall in next year's draft.

The 18-year-old star is known for his perimeter shooting, exceptional defense and his eight-foot wingspan. Wembanyama's skills were on display once again as he recorded 15 points, six rebounds and three blocks in Tuesday's game.

Unfortunately for Wemby and Co., it wasn't enough as his Paris-based Metropolitans 92's nine-game win streak came to an end in a 102-77 loss to Chorale Roanne in LNB Betclic Elite action.

Here are a look at his highlights from Wemby's latest outing:

Wembanyama's next game with the Metropolitans 92 will be on Dec. 11 against Monaco.

Everything you need to know to place your NBA bets and set your fantasy basketball lineups for Friday's five-game slate.
12 HOURS AGO
ESPN

Jaylen Brown took the blame after his missed free throws with 7.6 seconds left in OT sunk the Celtics vs. the Knicks on Thursday night.
BOSTON, MA・23 HOURS AGO
ESPN

Jessie Lemonier, who appeared in seven games with the Lions in 2021 and recently signed with the USFL, has died at the age of 25, the team announced.
DETROIT, MI・1 DAY AGO
ESPN

Before he backed up Davis Webb at Texas Tech, and then Alex Smith with the Kansas City Chiefs, Patrick Mahomes duked it out with his best friend in what might be the most important quarterback competition in football history.
WHITEHOUSE, TX・1 DAY AGO
ESPN

Rising star Ilia Malinin scored a personal-best 110.36 in the men's short program to kick off the second day of the U.S. Figure Skating Championships on Friday.
4 HOURS AGO
ESPN

The Carolina Panthers have agreed to hire Frank Reich as their new head coach, the team announced Thursday.
CHARLOTTE, NC・1 DAY AGO
ESPN

The Premier Hockey Federation is putting national pride on the line at its upcoming All-Star weekend. Find out where, when and who to watch.
MINNESOTA STATE・17 HOURS AGO
ESPN

Cole Caufield opts for surgery with Habs out of playoff race

Montreal winger Cole Caufield said Friday he wouldn't be having season-ending surgery on his right shoulder if the Canadiens were in playoff contention.
6 HOURS AGO
ESPN

The intertwined legacies of LeBron James and the Boston Celtics

LeBron James' story can't be told without the Boston Celtics and his personal rivalry with the storied franchise
BOSTON, MA・14 HOURS AGO
ESPN

According to The Wall Street Journal, franchises from Boston, Utah and the San Francisco area are in advanced discussions for NWSL expansion.
BOSTON, MA・45 MINUTES AGO
ESPN

Miami dismisses Josh Gattis as OC after one season

Miami has fired Josh Gattis as offensive coordinator after one season after the Hurricanes fell from a top-20 offense in 2021 to No. 86 last season.
MICHIGAN STATE・15 HOURS AGO
92.9 The Game

The Atlanta Falcons Hire Ryan Nielsen as their Defensive Coordinator

Nikola Jokic is the current favorite for NBA MVP, and deservedly so, but André Snellings explains why the gap between Jokic and Joel Embiid isn't as wide as some might think.
DENVER, CO・11 HOURS AGO
ESPN

Johnson hasn't given up a sack in more than two seasons, but he came close to leaving football behind at the peak of his dominance.
PHILADELPHIA, PA・1 DAY AGO
ESPN

Golden State Warriors star Stephen Curry was fined $25,000 for tossing his mouthpiece into the stands late in Wednesday's win over the Grizzlies.
SAN FRANCISCO, CA・4 HOURS AGO
ESPN

If Eagles fans needed any other reason to get fired up for the NFC title game against the 49ers, some San Francisco fans seem to have temporarily defaced the iconic monument.
PHILADELPHIA, PA・8 HOURS AGO