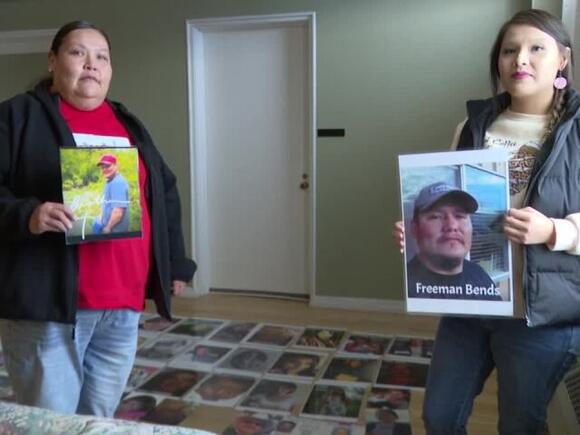 A nonprofit in Billings has used donations to bring awareness to the problem of missing indigenous people in Montana, and now they're directing donors to head online and give through their new GoFundMe account.

It's been six years since Freman Bends mysteriously disappeared in the Lodge Grass area before he was found dead in a ditch, and his sister Daphne Bends is still haunted by it.

“He called me the evening and told me to pick him up, and I never did," Daphne told MTN Tuesday morning. "And that’s the day he went missing. He was our protector. He was a good guy, hardworking, and very friendly to a lot of people."

Freman was 38 years old when he died. He left behind seven children, including Cara Oldcrow, who was only 18 years old at the time of his death.

“My dad in general was a really nice guy," Oldcrow said. "He got along with everybody. He was someone you could go to who you knew would have your back."

As shocking as Freman's story may seem, many members of Montana's indigenous communities have similar stories. It's because of these cases that Charlene Sleeper created Missing and Murdered Indigenous Peoples, or MMIP, in 2019.

“The first case that I worked was Henny Scott, who was a 14-year-old Northern Cheyenne victim that unfortunately passed away," Sleeper said. "I believe it was that particular case that catalyzed my own passion of addressing the overall MMIP crisis."

MMIP focuses on raising awareness and honoring those who have been lost. Sleeper is Crow and said providing this service to her people is an honor.

“Our people have been here for a millennia, so to be able to be in our homelands and create this option to heal is special," Sleeper said. "It’s crucially important in order to continue building and rebuilding our culture here."

The program runs completely on donations and recently established the GoFundMe page to try and make that process easier for those that want to support the cause.

“The GoFundMe itself is for people that are interested in supporting our work," Sleeper said. "So, it’s for community members or any kind of organizations that want to do a monetary donation."

And for the Bends family, it's certainly made an impact.

“We feel a sense of comfort with them helping us through our tragic, horrific experience,” Daphne said.

After undergoing two surgeries in 367 days to remove brain tumors, a Laurel firefighter is now paying it forward by raising money for other brain cancer patients.
LAUREL, MT・19 HOURS AGO
Q2 News

The Continuum of Care has a Point-In-Time survey to determine how many people are experiencing homelessness.
BILLINGS, MT・4 DAYS AGO
Q2 News

'One Class at a Time' recognizes teacher at Sandstone Elementary

Ms. Binford's smile, attitude and energy shines through to the kids and the entire school. The love she has for her students is amazing.
BILLINGS, MT・4 DAYS AGO
Q2 News

The deep freeze often spells troubles for pipes and that's definitely the case in Laurel, as the CVS pharmacy on Southeast 4th Street is now closed after pipes burst.
LAUREL, MT・14 HOURS AGO
Q2 News

What started as a love for the food truck scene and baked potatoes landed one Montana woman on the reality show The Blox, by BetaBlox.
MONTANA STATE・5 DAYS AGO
Q2 News

On July 15, a massive dust storm swept across I-90 near Hardin, causing blackout conditions and a 21-vehicle pile-up, which killed six people, including two children.
HARDIN, MT・6 DAYS AGO
Q2 News

Q2 Billings Area Weather: Cold but getting warmer as the week progresses

High pressure will keep dry conditions in place through the weekend, but daily mountain snow is possible
BILLINGS, MT・8 HOURS AGO
Q2 News

The public joined in on the search process for a new superintendent, while also welcoming in a new board member, during two at the Lincoln Center on Monday night.
BILLINGS, MT・7 DAYS AGO
Q2 News

Details were thin, but Yellowstone County Sheriff Mike Linder confirmed at 7:30 p.m. that at least one person had been shot.
BILLINGS, MT・18 HOURS AGO