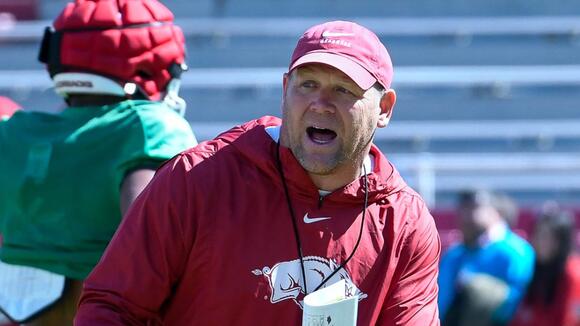 Let the speculation as to who's next begin

FAYETTEVILLE, Ark. — Barry Odom will be formally announced as head coach of the  UNLV Running Rebels at 10 a.m. Wednesday morning.

On Sunday it appeared that Arkansas coach Sam Pittman was going to escape into the bowl season with his defensive coordinator after Tulsa reportedly couldn't get its money right..

Odom was one of coach Sam Pittman's first staff hirings back in 2019 and has basically been the head coach of defense since.

Now, he is headed to the deserts of Nevada after three seasons in Fayetteville and his son has finished his senior season at Shiloh Christian.

Of course, the immediate question is who's next?

No guesses here on exactly who they could get, but with all the heat around Odom involving head coaching positions in the past week, it would seem unlikely that Pittman didn't either put feelers out or at least has a name or two in the back of his mind before Odom boarded a plane bound for the desert.

With the portal open and signing day on the horizon, it's unlikely that Arkansas will wait long for a replacement. Odds are high that the next Razorback defensive coordinator spoke with Pittman Tuesday.

It should be noted that Odom was in every picture Pittman took on his Texas recruiting swing this week. However, he wasn't in photos for the Atlanta portion Tuesday morning.

Considering RJ Johnson is a defensive back and Odom wasn't present, it's likely things were already official by the time the sun rose Tuesday.

Reports eventually came out that by Tuesday afternoon, the now former defensive coordinator was meeting with players on campus.

The Hogs are coming off a 6-6 season that was seriously off the expectations of just about everybody after last season's 9-4 mark that finished with a bowl win over Penn State.

Odom's defenses with the Hogs have given up lots of yards, but actually did well keeping people out of the end zone at times.

Odom's last stint as head coach was at Missouri where he evened his 25-25 overall record with a win over then interim Arkansas head coach Barry Lunney, Jr.

His last bowl appearance was at the Liberty Bowl where his Tigers fell to Oklahoma State in 2018.

When Pittman was hired with the Hogs in December 2019 he didn't waste any time picking Odom and the two have also been fairly close with regular walks discussing various aspects of being a head coach in the SEC.

(Portions of this story were contributed by Kent Smith)

WITH HORNSBY GONE, WHO CAN HOGS TARGET AT QB IN TRANSFER PORTAL?

MUNDANE GAME AGAINST TROY HAS DEVELOPED INTO MUST-WATCH TELEVISION

SEC SHORTS: WHO DO POLICE TURN TO WHEN CLEMSON ABDUCTS PLAYOFFS

Razorbacks will need to be able to hold serve in Bud Walton and steal a road win against a daunting final stretch of the season
FAYETTEVILLE, AR・7 HOURS AGO
All Hogs

Don't be surprised to see Makhi and Mekhel Mitchell to handle Oscar Tshiebwe.
FAYETTEVILLE, AR・3 HOURS AGO
All Hogs

Five-star signee took to Instagram almost immediately after loss, also hinted at whether there will be a possible rematch with Davis next season
FAYETTEVILLE, AR・4 HOURS AGO
All Hogs

Where is the All-American former Razorback slated to be picked in late April?
FAYETTEVILLE, AR・1 DAY AGO
All Hogs

South Carolina's Josh Gray did everything needed to upset Arkansas, but a Razorback freshman made a senior move
FAYETTEVILLE, AR・2 DAYS AGO
All Hogs