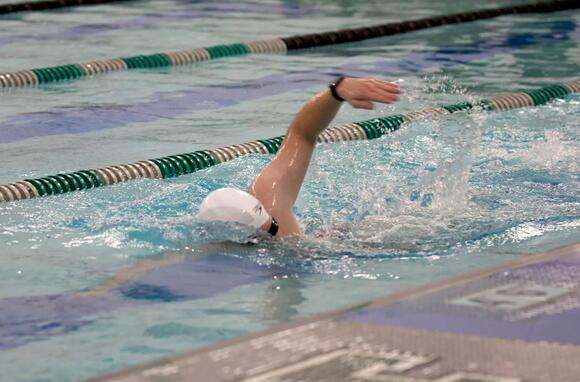 The Faribault boys swim and dive team is looking to continue improving in the 2022-23 season, with returning senior captains Chriz Ferris and Caleb Sadergaski leading the way.

Last year, the Falcons were able to finish ninth at the Section 1A Championship, having multiple personal bests at the meet. This year, they hope to do better.

Captain Caleb Sadergaski said “I’m excited about the new season. One thing I would like to see is for everyone to get their best times at the section championships, like we did last year.”

He also mentioned how he hopes to get a state time in the 100 fly, as that is his favorite event.

Coach Charlie Fuller noted the youthfulness of his squad.

“We have a lot of brand new guys this year,” he said. “What we want to do is consistently have better dives and faster times.”

Fuller mentioned the 2015 season, where it took time for everything to come together, but it worked out well in the end.

“I remember that year we got third in state, we only had one meet win all year. But come the end of the season, I had the right combination of guys to get third.”

Having the team’s best dives and quickest times at the end of the season is what Fuller hopes to see this season.

Asked about what some of the goals are for the season, captain Chriz Ferris said, “We have a lot of new people on the team, and I think if we can just continue to improve throughout the season, we can be successful.”

“I would like to go back to state and this time place in the top 16, placing in the top 16 is when you start to get noticed by colleges.”

The season kicks off 6:30 p.m. Thursday, Dec. 8 where the Falcons will face off against Rochester John Marshall at home.