An Iranian patrol vessel tried to blind the bridges of US Navy ships sailing through the Strait of Hormuz, US military says 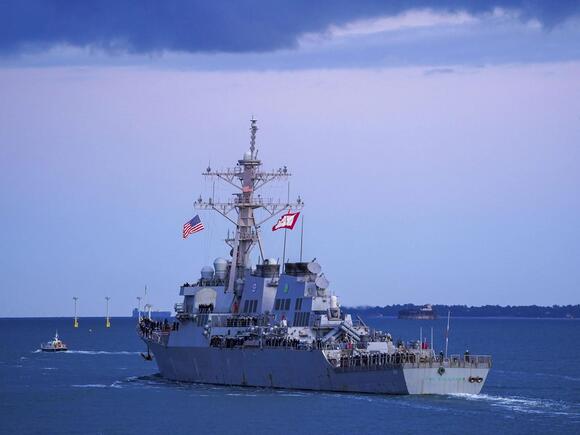 An Iranian patrol vessel tried to blind the bridges of two US Navy ships this week while they were sailing through international waters in the Middle East, US Central Command (CENTCOM) said on Tuesday.

Guided-missile destroyer USS The Sullivans and expeditionary sea base platform ship USS Lewis B. Puller were transiting the Strait of Hormuz, a thin body of water between southern Iran and the United Arab Emirates, when they were approached Monday night by an Islamic Revolutionary Guard Corps Navy (IRGCN) patrol boat, CENTCOM shared in a statement.

"The Iranian vessel attempted to blind the bridge by shining a spotlight and crossed within 150 yards of the US ships — dangerously close, particularly at night," CENTCOM said, adding that the US Navy ships were conducting a routine  crossing in international waters.

In response, the US vessels delivered warnings and used "non-lethal" lasers to de-escalate before continuing with their crossing, the US military said, adding that Iran's actions and maneuvers elevated the risk of collisions or miscalculations.

"This dangerous action in international waters is indicative of Iran's destabilizing activity across the Middle East," said Col. Joe Buccino, a CENTCOM spokesperson, in the statement.

Monday's incident is at least the third time over the last few weeks that US forces have reported Iranian influence in waters off the coasts of Middle Eastern countries.

In late November, the US Navy said an Iranian-made suicide drone was used in an attack on a commercial tanker while it was sailing in the Northern Arabian Sea. And earlier that month, US forces seized a "massive amount" of explosive material — which can be used to fuel ballistic missiles — from a fishing vessel traveling from Iran to Yemen.

The US Navy and US Coast Guard vessels have also had repeated run-ins with IRGCN vessels over the years that the US military has characterized, as it did this week, as "unsafe and unprofessional."

So…are we going to send Iran plane loads of cold hard cash again? Or hold off on that until they abduct another crew? Rewarding antagonism isn’t smart. And that is WHY rewards are exactly what Iran have been conditioned to expect from us.

You know what will stop them? Sinking their boats. That’s the appropriate response. Too bad our senile “commander in chief” doesn’t get that.

Ukraine is burning through artillery shells. Now the US is increasing production by 500%.

The US currently manufactures just over 14,000 rounds of 155mm ammunition every month. Ukrainian forces have fired that many in just 48 hours.
HAWAII STATE・2 DAYS AGO
Business Insider

For the 2nd year in a row, Iran is sailing its biggest warship around the world to show off its growing navy

Iran's navy chief said two Iranian warships are sailing around the globe to "show the authority of the dear people of Iran to the whole world."
WASHINGTON STATE・11 HOURS AGO
RadarOnline

A Russian soldier is suspected of taking his own life this week shortly after being ordered to return to the frontlines of the war in Ukraine, RadarOnline.com has learned.Mikhail Lyubimov, 25, allegedly jumped from his mother’s tenth-floor apartment one day before he was scheduled to return to the Ukraine combat zone.The young Russian soldier reportedly plummeted more than 100 feet before hitting the ground and dying on impact.According to Daily Mail, Lyubimov, had been suffering from severe panic attacks and started drinking heavily after he initially returned from the war in Ukraine on leave.The soldier’s 43-year-old mother, Natalia Lyubimov, indicated...
21 HOURS AGO
Newsweek

The U.S. announced Wednesday that it would be sending 31 Abrams tanks to Ukraine one day after Germany said it would send its Leopard 2 tanks.
2 DAYS AGO
Business Insider

Trump, who referred to Putin as a "genius" the week Russia invaded Ukraine, was once impeached over his dealings with Kyiv.
23 HOURS AGO
Business Insider

Ukrainian agent accused of spying for Putin was found with stacks of foreign cash and Russian SIM cards, officials say

The lieutenant colonel used a phone to take photos of documents and send them to Russian handlers via email, Ukraine's Security Service said.
12 HOURS AGO
Business Insider

The head of Ukraine's military, Valerii Zaluzhnyi, said he had "no doubts" when he donated his $1 million inheritance.
WASHINGTON STATE・2 DAYS AGO
RadarOnline

Vladimir Putin is reportedly set to “disappear” from his leadership position within the Kremlin because there is “clearly something wrong” with his health, RadarOnline.com has learned. In a sudden development to come amid rumors and reports the 70-year-old Russian leader’s health is quickly deteriorating, intelligence officials have revealed Putin is preparing to step down as Russia’s leader. The surprising revelation also comes as Russia’s ongoing war against Ukraine is "going from bad to worse,” and Putin’s political career is “hanging in the balance” as his forces struggle to take the neighboring nation one year after first invading in February 2022....
3 DAYS AGO
Business Insider

Wagner's limited gains in eastern Ukraine have come at a high cost and triggered rifts between the mercenary group and the Russian military.
1 DAY AGO
Business Insider

As fighting rages in Ukraine, the US is sending drones to keep an eye on another tense corner of Europe

US Air Force MQ-9s have been deployed to monitor southeastern Europe, where tensions are rising, and not just because of Russia.
CALIFORNIA STATE・2 DAYS AGO
Business Insider

At least 5 Russian men who escaped conscription have been living in Seoul's airport for months, and their refugee status still hangs in the balance: report

At least five men have been held at Seoul's Incheon airport for months after arriving separately. Their initial asylum applications were denied.
1 DAY AGO
Business Insider

Hundreds of armored vehicles are now heading to Ukraine to help fight off a looming Russian 'onslaught,' US officials say

"The combination of armor, mobility, and firepower that tanks provide is still important in ground warfare," one expert said.
GEORGIA STATE・1 DAY AGO
Business Insider

To decarbonize aviation, the US needs to ramp up production of sustainable aviation fuel, which can be 80% less carbon intensive than normal jet fuel.
13 HOURS AGO