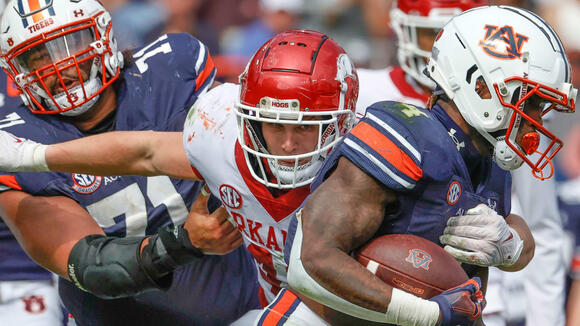 FAYETTEVILLE, Ark. – While it wasn't unexpected, the departure of linebacker Drew Sanders was what Sam Pittman and the Arkansas Razorbacks needed.

While baseball and basketball have been able to find solid footing in the new world of NIL and transfer portals, the football program has struggled to figure out where it fits.

Baseball and basketball don't require a lot of NIL money to keep up with other blue blood programs in their sport because their rosters are relatively small. It also helps that particular donors have adopted those sports, along with track and field, as pet projects so to speak.

However, when it comes to football, it takes an army of donors to keep up with elite programs in the initial phase of recruiting and Arkansas doesn't have that. There are neighborhoods in Texas that have more millionaires and billionaires than all of Arkansas.

The natural state is truly beautiful, but a big part of that beauty is because of its small population. And while it's a state rich in spirit, it's not one that's rich in the pocket book.

Arkansas ranks next to last in average household income in the United States. Add that in with a relatively small flagship university at roughly 1/3 the size pseudo-rival Texas A&M, and it's a recipe for high school recruiting classes that are generally considered good, but will probably never drift into the "great" realm unless something changes with the current NIL system.

However, while the high school recruiting classes might not make national headlines, Pittman has stumbled upon a formula that if marketed correctly, can make Arkansas a legitimate SEC contender.

You see, while Arkansas might not be able to afford numerous overpriced and largely unproven talent right out of high school, it offers the perfect place for three other hungry and talented groups of players to land:

1. Elite talent from smaller schools looking for a chance to prove themselves to NFL scouts on a big stage at a place that will take them seriously and provide opportunity.

2. Elite talent from an NIL rich school that could provide money now, but not the opportunity to prove they are worth the big bucks after college.

3. Quality players from broken programs who just need a fresh start and a fair shot at earning playing time.

Sam Pittman has more than put together a solid portfolio in a short amount of time in the first category.

John Ridgeway made his way to Arkansas from Illinois State and took advantage of playing in the home of the Dallas Cowboys and its owner Jerry Jones while dominating a respected SEC offensive line.

As a result, he's found his way to an NFL roster with the Washington Commanders via Dallas Cowboys draft choice.

Former Toledo Rocket Matt Landers has forced NFL teams to look at his film as one of the SEC's top receivers this year while Terry Hampton made his way over from Arkansas State and proved he could replicate his 2020 breakout year numbers against one of the toughest schedules in college football.

There is no doubt that Pittman has selling points to entice the best of the best from Power Five schools. Those guys bring chips on their shoulders, which helps them bring a mentality Arkansas fans have sought from their football team over the years.

Pittman has a solid pitch to the third group in his back pocket also.

Wide receiver Jadon Haselwood emerged from the quagmire at Oklahoma last year after Lincoln Riley left, putting together a season Haselwood felt was strong enough to opt for the NFL.

Defensive back Dwight McGlothern came to Arkansas from an LSU program that was in disarray after the dismissal of Ed Orgeron and definitely put together a quality highlight reel for scouts with his immediate impact.

Defensive lineman Jordan Domineck left behind a tumultuous situation at Georgia Tech that led to dismissal of its coach early this past season and doubled his sack total against the highest competition of football this side of the pros.

However, it wasn't until this morning that Pittman officially notched the credibility to pitch the group that has the most potential to reshape the program.

Sanders was only in the program for a single season after having been cast aside by Alabama. However, after only a few games, he immediately started not only hitting NFL draft boards, he was showing up in first round projections.

A young man who might not have even seen the field at Alabama not only came in for an opportunity to prove himself against the same talent he would have faced at Alabama, he got to put out film from a tougher schedule that included facing Alabama at half the distance to his former home in Denton, Texas with one game less than an hour away in Arlington.

The flood of 4-stars and 5-stars from Texas, Texas A&M and Alabama this year has the potential to fill Arkansas with a solid base. The mass exodus from NIL rich schools each year isn't going to end anytime soon.

Arkansas can generate enough NIL money to serve as an opportunity-rich landing spot for these players with all the chances in the world to be in front of NFL scouts against the best of the best.

This is where Arkansas fits into the puzzle.

Pittman and his crew can do their best to lure quality talent in traditional recruiting while building the program that becomes a prime destination when the transfer portal rolls around each year.

The cream rises to the top in those high school recruiting classes while those who can't develop into elite SEC material depart to make way for top-notch players in the portal looking to be an upgrade replacement for those who couldn't cut it.

This is the path to Arkansas being a contender in the SEC.

PITTMAN CRUSHING PR GAME THIS WEEK, EVEN IN COMPARISON TO KIFFIN

Razorbacks will need to be able to hold serve in Bud Walton and steal a road win against a daunting final stretch of the season
FAYETTEVILLE, AR・19 HOURS AGO
All Hogs

Don't be surprised to see Makhi and Mekhel Mitchell to handle Oscar Tshiebwe.
FAYETTEVILLE, AR・15 HOURS AGO
All Hogs

Where is the All-American former Razorback slated to be picked in late April?
FAYETTEVILLE, AR・1 DAY AGO
All Hogs

Razorbacks Have Chance to Make Series Run Against Wildcats
FAYETTEVILLE, AR・1 DAY AGO