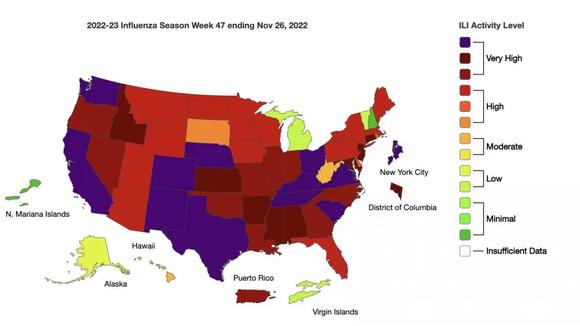 UTAH — A typical flu season ramps up until December and peaks in January or February. Just like the snowfall this year, the flu season appears to have kicked off early.

According to the latest influenza data from the CDC , 44 states, including Utah, reported high or very high flu activity over the past week.

According to the most recent Utah Department of Health and Human Services weekly report , there have been 207 seasonal influenza-associated hospitalizations as of November 26.

“This week in Utah, there was an increase in all indicators of flu activity, including the number of influenza-associated hospitalizations, levels of influenza-like illness, and a number of positive flu labs reported,” said the UDHHS weekly report. “We expect a severe and early season. In order to get the best protection from severe illness due to flu this season, it is important to get your flu vaccine as soon as possible.”

The UDHHS has recommended that everyone older than six months of age should get a flu vaccine every year, with rare exceptions. To find a vaccine site near you, visit vaccine.gov .

Additionally, the UDHHS recommends taking influenza antiviral drugs if prescribed by a doctor and taking preventative actions to stop the spread of germs, such as washing your hands, covering your cough, and staying home from work if you are sick.

NEW YORK (AP) — U.S. health officials said Thursday a company is recalling its over-the-counter eye drops that have been linked to an outbreak of drug-resistant infections. The Centers for […]
WASHINGTON STATE・2 DAYS AGO
TownLift

UTAH — While most of the winter season has seen few instances of poor air quality, that cannot be said for the current conditions. Inversion has set in, leaving multiple […]
UTAH STATE・2 DAYS AGO
TownLift

WASHINGTON (AP) — Fifteen Native American tribes will get a total of $580 million in federal money this year for water rights settlements, the Biden administration announced Thursday. The money […]
ARIZONA STATE・1 DAY AGO
TownLift

UTAH —  According to the Utah Avalanche Center, there were 24 human-triggered avalanches on Saturday, at least 13 of which occurred in the Salt Lake region. While six people were […]
UTAH STATE・6 DAYS AGO
TownLift

SACRAMENTO, Calif. (AP) — Competing priorities, outsized demands and the federal government’s retreat from a threatened deadline stymied a deal last summer on how to drastically reduce water use from […]
CALIFORNIA STATE・5 DAYS AGO
TownLift