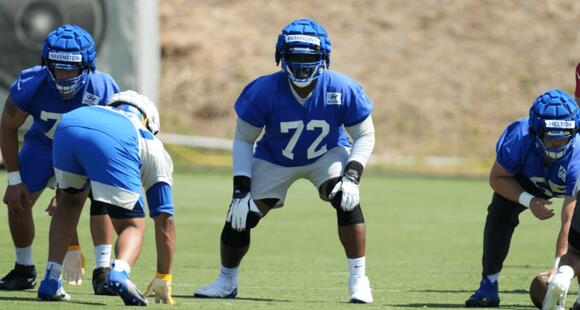 Tremayne Anchrum Jr. is up for some major NFL hardware despite the Los Angeles Rams' lost season.

Anchrum Jr. was revealed to be the team's nominee for the upcoming Walter Payton Man of the Year Award on Tuesday. The award, named after the late Chicago Bears running back, focuses on rewarding players' contributions off the field while acknowledging those on it.

"I am honored to be nominated for this amazing award and to even be in the conversation amongst so many people that are doing so many great things around the country and around the world," Anchrum Jr. told the Rams' official site upon his nomination. "I'm also thankful for the people who have given me an opportunity to serve because I want to make a difference.

"It doesn't matter if it's me or someone down the street, whether I win the award or not, it's about coming together to help each other and our community," he continued. "It doesn't have to be anything big, but meaningful actions taken from the goodness of your heart. If we all came together and asked how we can make the world a better place, I think we would get a really good result."

Retired Rams blocker Andrew Whitworth is the current holder of the award, becoming the franchise's first honoree since the title was introduced in 1970. Active winners of the award wear a patch bearing Payton's likeness on their uniform for the rest of their careers. That current group includes Calais Campbell, J.J. Watt, and Russell Wilson.

While Anchrum's season ended early, fracturing his fibula in Week 2 , he has gotten himself involved in numerous charitable organizations throughout the Los Angeles area. Upon joining the Rams' organization as a seventh-round pick in 2020, he began volunteering at Boys and Girls Club Los Angeles and has since collaborated with groups like Downtown Women's Center, Hollywood Food Coalition, Set the Expectation, and The People Concern.

"He doesn't care who knows that he's doing it. Most of the time no one knows he's doing it, and that's the most impressive part," Whitworth said of his former teammate. "It's just who he is on a daily basis and wanting to make his community better, wanting people to know that they aren't living life without him and that he thinks about them each and every day. He shows up and I think sometimes in life that's the best thing we can do, just show up. Tremayne Anchrum Jr. does that."

Anchrum and the other 31 nominees will be honored and recognized at the NFL Honors ceremony scheduled for Feb. 10, three days before Super Bowl LVII. In the meantime, the Rams return to action on Thursday night against the Las Vegas Raiders (5:15 p.m. PT, Amazon Prime Video).

Want to see the Champs? Get your L.A. RAMS game tickets from SI Tickets here!

EXCLUSIVE: Colin Kaepernick has signed with CAA for representation. The former NFL star holds the all-time NFL record for most rushing yards in a game by a quarterback. In 2016, he took a knee during “The Star Spangled Banner” to bring attention to systemic oppressions against Black and Brown people, and since then, has founded and helped to fund three organizations: Know Your Rights Camp, Ra Vision Media, and Kaepernick Publishing, which advance the liberation of Black and Brown people through storytelling, systems change, and political education. Related Story Anna Faris Signs With CAA Related Story Marilyn Manson Settles 'Game Of Thrones' Actress Esmé Bianco's...
2 DAYS AGO
thecomeback.com

When the Cincinnati Bengals take on the Kansas City Chiefs in the AFC title game on Sunday night, they’ll be doing it without three of their starting offensive linemen as La’el Collins, Alex Cappa and Jonah Williams will all be sidelined from the game with injuries. The three...
CINCINNATI, OH・19 HOURS AGO
The US Sun

FORMER Detroit Lions defensive player Jessie Lemonier has died at the age of 25. The news of his shocking death broke on Thursday. The Lions said in a statement that they were "shocked and saddened to learn of the passing of former Detroit Lion Jessie Lemonier. "Jessie was a model...
DETROIT, MI・2 DAYS AGO
OnlyHomers

Tragic news has struck the world of professional wrestling with the word that one of wrestling's biggest stars has lost his life at the age of 38. Celebrity entertainment outlet TMZ, which is known for breaking the news of many deaths of famous people around the world, broke the news of the death of legendary wrestler Jay Briscoe, who has tragically died in a car crash at the age of 38.
1 DAY AGO
RamDigest

As the Rams try to bounce back from a disappointing 2022 season, they face a tough schedule in 2023.
2 DAYS AGO
RamDigest

Los Angeles Rams safety Taylor Rapp is set to hit the free agent market this offseason - but the Rams shouldn't let him get too far, according to Pro Football Focus.
WASHINGTON STATE・2 DAYS AGO
RamDigest