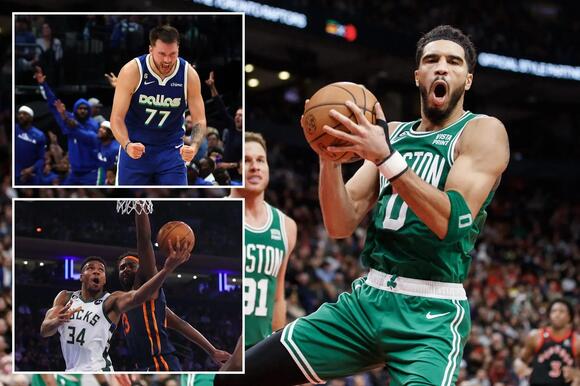 We’re only seven weeks into this young NBA season, and we’ve already seen multiple players stake their claim as the early MVP favorite. Add Jayson Tatum’s name to that list.

The Celtics star vaulted his way to the top of the odds board at BetMGM this week, dealing as a slim +275 favorite after carrying his team to a stellar 16-2 run since early November. He’s priced just above preseason favorite Luka Doncic and two-time winner Giannis Antetokounmpo, who are tied at +300 after impressive starts of their own.

Tatum was our best bet to win this award before the season, when he was dealing as a 12-1 dark horse after leading his team to the NBA Finals. It was an easy case to make: the 24-year-old forward took a major leap forward in 2021-22 and figured to be the best player on the best team in a “vengeance tour” of sorts.

Fast forward seven weeks into the season, and that’s exactly how it’s played out. Tatum is averaging career highs in points (30.8) and rebounds (8.3) while shooting a career-best 48 percent from the floor. He’s doing it on the other end, too: he’s one of just five players averaging at least one block and one steal per game and ranks 16th in defensive win shares (1.1).

And, crucially, he’s doing it all for the best team in the league – a major reason why oddsmakers have Tatum priced as such a short favorite to win this award. The Celtics own the NBA’s best record (20-5) and net rating (+8.5) through 25 games and are currently on pace for 66 wins, which would all but guarantee a trophy for the rising superstar.

It’s still early, of course, and plenty could change between now and April. It’s not like Tatum’s case is unrivaled, either: he ranks fourth in scoring behind Doncic (33.4 PPG), Antetokounmpo (31.9), and MVP long shot Shai Gilgeous-Alexander (31.3), and he ranks outside of the top five by most advanced metrics.

That opens the door, if only slightly, for another sensational scorer to steal this award if their team wins enough games.

Who else is worth betting to win NBA MVP?

The clear choices are the aforementioned Doncic and Antetokounmpo, though they’re hardly worth betting at their current price over Tatum. Stephen Curry (+800) is posting a nearly identical offensive stat line to his unanimous MVP campaign in 2015-16, but his Warriors look like a tough bet to crack 50 wins with the way they’re playing so far.

Instead, keep an eye on Devin Booker (+2500), who finished fourth in MVP voting last year and whose torrid scoring run has helped carry the Suns to the best record in the West. It’s also hard to ignore the ridiculous numbers that Anthony Davis (+2500) is posting on a nightly basis, though the Lakers’ lousy record (10-12) will likely hold him back.

If you’re shooting for the moon, don’t ignore what Gilgeous-Alexander (+5000) has done to this point. We broke down his case in detail a few weeks ago, and he’s continued his elite scoring pace and spectacular two-way play for an otherwise sleepy Thunder squad. Only three MVP winners have come from teams with fewer than 50 wins, but he’s making as compelling of a case as any lottery-bound star.

Something isn’t adding up for one NBA fan on Reddit. Jaren Jackson Jr.‘s campaign for NBA Defensive Player of the Year has been called out by the Reddit user, who pointed out that the Grizzlies star’s defensive statistics during home games are suspiciously higher than road matchups. The NBA has not found any mistakes on their end, however, and disputed suspicion that the Grizzlies’ home-court scorekeeper was awarded Jackson illegitimate blocks and steals to pad his stats. “In order to ensure the integrity of our game statistics, auditors, independent of the statisticians on-site, review all plays and stats decisions in real-time...
MEMPHIS, TN・4 HOURS AGO
Los Angeles Times

Kawhi Leonard finishes with 32 points and makes five three-pointers to lead the Clippers to their fifth consecutive win in a victory over the Hawks.
LOS ANGELES, CA・35 MINUTES AGO
FastBreak on FanNation

LeBron James Is 5 Games Away From NBA History

Philadelphia 76ers star guard James Harden didn’t get the memo in time. During the third quarter of Philadelphia’s 126-119 win over the Denver Nuggets, Harden forgot to check in after a timeout, leaving the 76ers with four men on the floor.  So, after realizing his mistake, Harden tried to sneak onto the court – and got hit with both the ball and a technical foul. The mistake aside, the 33-year-old guard put up 17 points and dished out 12 assists during the 76ers’ victory. Joel Embiid, who was snubbed from an NBA All-Star starter spot, carried his team with a monster game that consisted of putting up 47 points and grabbing 18 rebounds. With the help of its two stars, Philadelphia is placed second in the Eastern Conference with a 32-16 record.
PHILADELPHIA, PA・3 HOURS AGO
BasketballNetwork.net

Kenny Smith details just how miserable the culture of the Sacramento Kings was, having spent 3 years with them
SACRAMENTO, CA・13 HOURS AGO
New York Post

Shaquille O’Neal and Charles Barkley weren’t impressed by the Lakers trading for Rui Hachimura earlier this week. During TNT’s postgame show on Thursday, the pair took a few jabs at the 24-year-old forward and his new team, with O’Neal saying he didn’t even know who the former Wizards player was. Meanwhile, Barkley botched the pronunciation of Hachimura’s last name and poked fun at Lakers general manager, Rob Pelinka. “This could be the best trade deadline ever this year” Barkley said. “Aye, Shaq, can I give the Lakers a compliment? You know how much I hate the Lakers and we show them...
LOS ANGELES, CA・1 DAY AGO
New York Post

I recall thinking, then writing, “It has come to this?” Not sure he’d have chosen it as part of his legacy, but Billy Packer, who died Thursday at 82, helped remind us that the sports world had gone — and remains — nuts. No bottom in sight on which to bottom out. The selection committee for the 2004 NCAA Tournament, which was being called on CBS in large part by Packer (as a longtime NBC court-side presence with Dick Enberg and Al McGuire, he followed the Tournament to CBS, and in 2008 he was dumped, replaced as lead analyst by Clark Kellogg)...
PHILADELPHIA, PA・6 HOURS AGO
New York Post

Robert Horry was tossed from his son’s high school basketball game on Friday night in L.A. after screaming at referees, video obtained by TMZ Sports shows. He was also escorted from the gym by police, according to NBC Los Angeles. The 52-year-old seven-time NBA champ can be seen in the video repeatedly shouting “you suck” at a referee during the game. A referee then reportedly pointed at Horry, who was standing in the bleachers, and threw him out. Horry continued shouting, yelling “Hey ref, you talking about me? You suck! Oh, you’re mad at me because I said you suck?” The incident took...
LOS ANGELES, CA・9 HOURS AGO