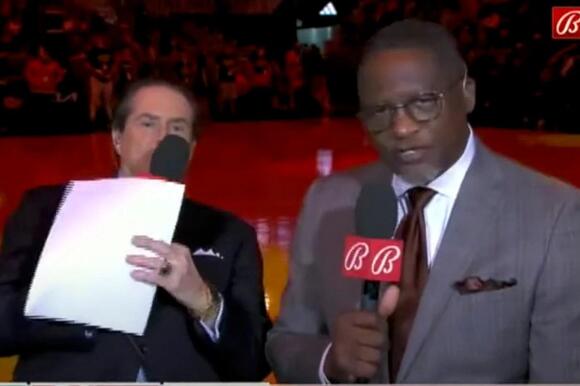 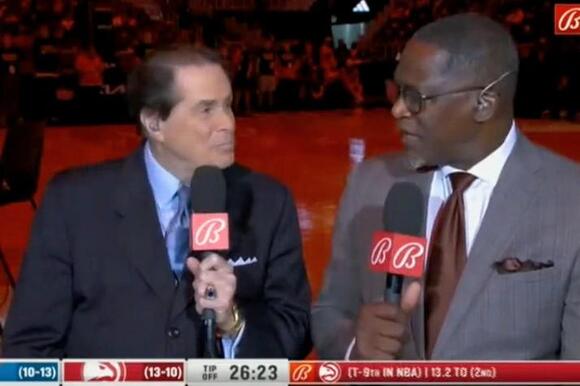 Bob Rathbun appears to be on the mend.

Monday night, before the Hawks faced the Thunder, the Atlanta Hawks play-by-play announcer suffered a medical emergency while on-air . As color commentator Dominique Wilkins was speaking, Rathbun began convulsing and lost consciousness. The Hawks later announced that he had suffered a bout of dehydration and was transported to the hospital for further evaluation.

Tuesday, the Hawks and Bally Sports Southeast issued a statement saying that Rathbun is “in good spirits” and expected to leave the hospital today.

“Bally Sports play-by-play broadcaster for the Atlanta Hawks, Bob Rathbun, stayed in Emory Midtown Hospital in Atlanta overnight for observation and further tests,” the statement said. “As of this morning, all tests were very favorable and Bob is in great spirits. Upon completion of remaining tests, Bob plans to be released from the hospital later today. Bob’s health is of the utmost concern to Bally Sports and the Atlanta Hawks and he will return to the broadcast booth only after he is well rested and fully recovered.”

The 68-year-old Rathbun has been calling Hawks games on TV since 1996.

Lauren Jbara, a host and reporter for the Hawks on the network, filled in for Rathbun on the fly.

“Thinking of you, @BobRathbunTV,” she wrote . “He is incredibly talented at his job and makes it look easy. Get well soon, Bob. We are sending prayers and hugs your way.”

This was the second time that Jbara had to pull snap play-by-play duty; she also filled in for Rathbun on about a half-hour’s notice last December after Rathbun tested positive for COVID-19.

Philadelphia 76ers star guard James Harden didn’t get the memo in time. During the third quarter of Philadelphia’s 126-119 win over the Denver Nuggets, Harden forgot to check in after a timeout, leaving the 76ers with four men on the floor.  So, after realizing his mistake, Harden tried to sneak onto the court – and got hit with both the ball and a technical foul. The mistake aside, the 33-year-old guard put up 17 points and dished out 12 assists during the 76ers’ victory. Joel Embiid, who was snubbed from an NBA All-Star starter spot, carried his team with a monster game that consisted of putting up 47 points and grabbing 18 rebounds. With the help of its two stars, Philadelphia is placed second in the Eastern Conference with a 32-16 record.
PHILADELPHIA, PA・19 HOURS AGO
New York Post

Shaquille O’Neal and Charles Barkley weren’t impressed by the Lakers trading for Rui Hachimura earlier this week. During TNT’s postgame show on Thursday, the pair took a few jabs at the 24-year-old forward and his new team, with O’Neal saying he didn’t even know who the former Wizards player was. Meanwhile, Barkley botched the pronunciation of Hachimura’s last name and poked fun at Lakers general manager, Rob Pelinka. “This could be the best trade deadline ever this year” Barkley said. “Aye, Shaq, can I give the Lakers a compliment? You know how much I hate the Lakers and we show them...
LOS ANGELES, CA・2 DAYS AGO
New York Post

BOSTON — Lakers guard Patrick Beverly grabbed a courtside camera in an effort to show referee Eric Lewis what everyone who’d watched the replay already knew: LeBron James was fouled on his missed layup at the end of regulation. Instead of getting the call, Beverly drew a technical foul that gave Boston the lead to start overtime and the NBA-leading Celtics went on to beat Los Angeles 125-121 on Saturday night. “The best player on earth can’t get a call. It’s amazing,” Lakers coach Darvin Ham said. “As much as you try not to put it on the officiating, it’s becoming increasingly...
BOSTON, MA・13 HOURS AGO
BasketballNetwork.net

Kenny Smith details just how miserable the culture of the Sacramento Kings was, having spent 3 years with them
SACRAMENTO, CA・1 DAY AGO
OnlyHomers

Tragic news has struck the world of professional wrestling with the word that one of wrestling's biggest stars has lost his life at the age of 38. Celebrity entertainment outlet TMZ, which is known for breaking the news of many deaths of famous people around the world, broke the news of the death of legendary wrestler Jay Briscoe, who has tragically died in a car crash at the age of 38.
1 DAY AGO
New York Post

Clemson basketball guard Brevin Galloway added some painful details to what the university labeled an “abdominal issue” Thursday night. Galloway doesn’t know why “my balls and my nut sack were exploded.” All Galloway did was lift in the morning and take a nap. Then, just three hours later, he had undergone surgery to reduce his testicles back to their normal size. “I don’t know what happened to my balls,” Galloway said in a video posted to his Instagram. “I guess they were trying to be like basketballs. “But we made it. Now, I’m going to be spoiled for the next 48 hours, and...
CLEMSON, SC・2 DAYS AGO
New York Post

San Francisco 49ers fans made their presence known in Philadelphia ahead of the NFC Championship game on Sunday. Niners supporters touched down in the City of Brotherly Love and hung a team shirt on the famous Rocky Balboa statue outside the Philadelphia Museum of Art on Friday. “Don’t you ever disrespect Rocky like that again,” one Eagles fan told Philadelphia’s Action News on 6ABC while at the tourist attraction on Sunday. The outlet then shared footage of 49ers fans gathering at the Rocky statue, where some joined Niners chants and others posed for photos with the landmark. Niners fans apparently gave their...
PHILADELPHIA, PA・1 HOUR AGO
New York Post

The Nets have been looking for any help they can get as Kevin Durant recovers from a right MCL sprain, but they were without one more scorer Saturday. In addition to missing Ben Simmons, who was out with what the team called left knee soreness, T.J. Warren sat with a left shin contusion he sustained Thursday in a loss to the Pistons. Warren is day-to-day, head coach Jacque Vaughn said before the Nets beat the Knicks, 122-115, at Barclays Center. Warren exited the game Thursday in the fourth quarter after logging 15 minutes, during the last of which he was hobbling. It...
BROOKLYN, NY・14 HOURS AGO
New York Post

Mariano Rivera, who might have received the largest ovation of the night Saturday, watched from among the Barclays Center crowd as a different kind of New York closer took over. When the Nets, who were playing without the injured Kevin Durant and Ben Simmons, needed a late-game weapon, there was just one player to turn to — the most prolific fourth-quarter scorer in the NBA. Kyrie Irving emerged from the bench following a third-quarter breather to play the entire fourth quarter, scoring 21 of his 32 points to help the Nets seize control of a game that had hung in the balance...
NEW YORK CITY, NY・9 HOURS AGO
New York Post

The Rangers gave Will Cuylle his first taste of the NHL this past week, recalling the big-bodied wing from AHL Hartford for a two-game stint before the All-Star break. Cuylle had been tearing it up for the Wolf Pack, with five goals in eight games leading up to the call-up, which seemingly gave the Rangers the perfect excuse to give him a look in the fourth-line role  they imagine him fitting into in the future. Plus, the stars aligned and his NHL debut came  in Cuylle’s home city of Toronto. “It’s kind of in the back of your head, but you don’t...
NEW YORK CITY, NY・16 HOURS AGO
New York Post

The wives and girlfriends of Philadelphia Eagles players are gearing up for the big game. Paige Bieker, fiancée of Eagles safety Anthony Harris, hit the gym to “walk out the nerves” before the NFC Championship game against the 49ers on Sunday. Bieker then hit the makeup chair to get game day ready, with celebrity makeup artist Alex Natoli responsible for her glam. She also teased another walk up video on game day after she posted the Philly WAGs doing the viral social media trend last week. Prior to kickoff, Bieker and other Eagles WAGs enjoyed a series of bonding experiences. They...
PHILADELPHIA, PA・3 HOURS AGO
New York Post

Knicks have no answers for Kyrie Irving in loss to Nets

It doesn’t matter how many Knicks fans fill the seats or how many key Nets are sidelined. When the two teams meet, the team from Brooklyn can basically roll the ball out and prevail. Until further notice, the Nets own the on-court aspect of this city rivalry. It continued Saturday. The Knicks were coming off two of their best wins of the season, over the Cavaliers and the Celtics. The Nets were without Kevin Durant and Ben Simmons. It was hard to tell, however, that the Nets were short-handed. They were that much better for the majority of the first three quarters, toying...
BROOKLYN, NY・17 HOURS AGO
New York Post

Action Network NFL analyst C Jackson Cowart is in his first season in The Post’s Bettor’s Guide. Here are his best bets for the conference championship round.  PHILADELPHIA EAGLES-San Francisco 49ers: Under 46.5 If I had to pick a side here, it would be Philly, which looks like an unsolvable juggernaut when everything clicks. Yet the safer play here is the Under between two teams led by elite defenses. The 49ers allowed the fewest yards in the NFL in the regular season (300.6 yards per game), and the Eagles allowed the second-least at 301.5 ypg. Check out more of the Best Sportsbook Promo...
PHILADELPHIA, PA・5 HOURS AGO
New York Post

We know that it has been said the definition of insanity is doing the same thing repeatedly while expecting a different result. I’m not sure whether that definition applies to the NHL and its playoff format or to me for writing about just about annually for the last decade. Both, I suspect. I get that the NHL does nothing to provide rewards for success and everything in its power to level the playing field. The punitive hard cap, of course, is the essence of the league’s commitment to imposing restrictions that most significantly hamstring successful teams more quickly than others. So too is...
15 HOURS AGO