Jamie Dimon says Americans are spending all their money because of inflation—and that could tip the U.S. into a recession next year 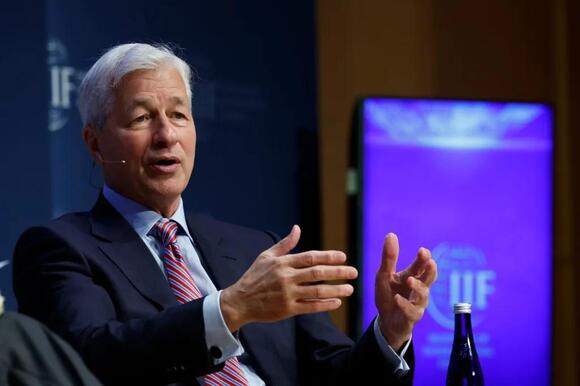 Jamie Dimon is worried that U.S. consumers could spend away their savings as inflation continues to bite, sending the economy into a recession next year.

The JPMorgan Chase CEO said on Tuesday that consumers still have $1.5 trillion more “in their checking accounts” than they did prior to the pandemic, but warned that that may not last.

Americans are spending 10% more than they did a year ago due to inflation and rising interest rates, Dimon said, and they’re tapping into their savings to do so.

The personal savings rate —which measures consumers’ savings as a percentage of their disposable income—fell to just 2.3% in October, well below the over 9% figure seen before the pandemic.

“Inflation is eroding everything,” Dimon told CNBC . “[T]hat trillion and a half dollars will run out sometime midyear next year. So when you’re looking out forward, those things may very well derail the economy and cause the mild or hard recession that people worry about.”

Dimon has warned since May that the U.S. could experience a recession next year as consumer spending falters, arguing that economic “ storm clouds ” could turn into a full-blown “ hurricane .”

“There’s storm clouds. It could mitigate; it could be a hurricane. We simply don’t know, and as a risk manager I prepare for both,” he said on Tuesday, repeating his previous warnings.

At the Fortune Global Forum last month, Dimon broke down his view on the odds of a U.S. recession to Fortune CEO Alan Murry.

While Dimon warned about consumers’ fading spending power and a potential recession in 2023 this week, he also noted that the U.S. is in a good position relative to its peers.

“The United States economy is the strongest economy in the world today. So we should celebrate that a little bit,” he said.

U.S. consumers and the labor market have been surprisingly resilient over the past few months, despite some of the most aggressive interest rate hikes in history .

Consumer spending rose 0.5% in October month to month when adjusted for inflation—the biggest increase since January. Americans also spent a record $11.3 billion on Cyber Monday. And the U.S. economy added 263,000 jobs last month, with the unemployment rate sticking near pre-pandemic lows at 3.7%.

Dimon argued the main risk to the economy may come from issues abroad, however, including fracturing supply chains, rising commodity prices, and war.

“There’s a lot of geopolitical upheaval,” he said, adding that emerging-market countries will pay a “heavy price” for high commodity prices, rising interest rates, and the strong dollar. “I don’t think we’ve seen that kind of turmoil in the global world in a long time.”

Dimon isn’t the only business leader preparing for the possibility of an economic hurricane. Some 98% of CEOs expect a recession could hit the U.S. within the next 12 to 18 months. And top economists, like Queens’ College, Cambridge president Mohamed El-Erian, have warned that the economy is not just on the cusp of a recession but “in the midst of a profound economic and financial shift.”

This dumpster 🔥 of a presidency has put illegals before Americans, China before the US, and criminals before their victims. They just cancelled the quarterly oil & gas leases for the 7th time in 2 years and have only held one sale in 2 years, when the law clearly states they have to hold it QUARTERLY. Once title 42 ends it's going to be no holds barred and we're going to have 20 million illegals entering this country over the 4 years this administration is in office. Biden has to be impeached but sadly that won't solve anything. Texas needs to step up and keep flying them to places like Martha's vineyard, if only to put it back in the MSM.

Just wait till January, when people start to file their taxes, and they get only 1/2 or 1/3 of what they usually get for tax return ! Because of changes that Biden has changed

He is right. When it comes to people spending more money it's because prices are higher with most products costing 10 to 50% more. So the amount of money spent on the same amount of goods is way higher. I get the same amount of groceries and gas but spend 25% more then I did in 2020.

Experts weigh in on the latest GDP report. Was the fourth quarter the economy’s final hurrah?
2 DAYS AGO
Fortune

Immigrants will make up for the lag in new births in the U.S. in the coming decades, a recent government report predicts.
3 DAYS AGO
Fortune

Billionaire investor Ray Dalio says the U.S. debt limit is a ‘farce’ it ‘works like a bunch of alcoholics who write laws to enforce drinking limits’

While the Congress scrambles to reach an agreement on the debt ceiling, billionaire investor Ray Dalio writes that "there is no debt limit."
WASHINGTON STATE・2 DAYS AGO
Fortune

Quiet quitting and remote work may be factors.
1 DAY AGO
Fortune

Inflation has reduced the value of social security benefits to recipients. But there will be further cuts in the long run. Experts say the increasing needs of seniors are burdening small benefit reserves. Americans are living longer because of lower lifestyle risks. Life expectancy was 47 years in 1900 and it was 76 in 2021.
1 DAY AGO
Fortune

Fully remote roles are taking a backseat to "remote-first" jobs.
3 DAYS AGO
CNET

Social Security 2023: Here's When You Can Expect Your February Check to Arrive

Russia's war in Ukraine is piling on pressures that threaten a crisis in global food supply.
2 DAYS AGO
Fortune

At the opening of Atlantis the Royal, Queen Bey reportedly slept in $100,000 a night accommodations.
4 DAYS AGO
Fortune

He claims to have made $8 million in just 6 years.
ARIZONA STATE・1 DAY AGO
Fortune

Chinese electric vehicle companies are racing ahead on every front, and they may be the biggest threat to Tesla's dominance.
2 DAYS AGO
Fortune

Bill Gates, seen here at the Australian Open on Thursday, considers China's rise a net positive. Bill Gates sees China’s rise as a “huge win for the world.” But he knows that not everyone shares his view. Speaking this week at the Lowy Institute, a think tank...
WISCONSIN STATE・2 DAYS AGO
Fortune

Ultra-rich Bryan Johnson sees a team of 30 doctors for regular, and sometimes invasive, tests to make him biologically younger.
2 DAYS AGO
Fortune

Despite a dip in job security, workers are not willing to forgo flexibility and work-life balance, according to Randstad's research.
3 DAYS AGO
Fortune

JPMorgan’s top strategist warns stocks have a 10%-plus drop ahead: ‘Things have to get worse before they can get better’

Traders work on the floor of the New York Stock Exchange during opening bell in New York City on Jan. 18, 2023. With the Federal Reserve raising interest rates seven times last year to fight levels of inflation not seen since the 1980s, CEOs said in interviews at the time that they were preparing for a recession and the S&P 500 sank roughly 20%. But in January, despite consistent doomsday predictions from Wall Street, the blue-chip index recovered as much as 5%.
3 DAYS AGO
Fortune

The housing market recession could be bottoming out. What does it mean for home prices?

57% of Americans can’t afford a $1,000 emergency expense, says new report. A look at why Americans are saving less and how you can boost your emergency savings

Rising costs and interest rates have made it more difficult for Americans to save for emergencies.
3 DAYS AGO
Fortune