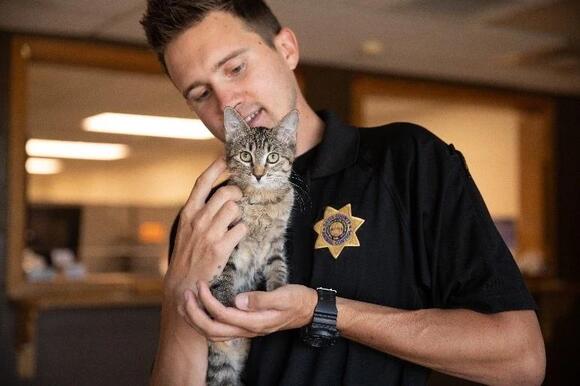 SALT LAKE CITY, Utah ( ABC4 ) – The Best Friends Animal Society shared its gratitude and congratulations to three different animal service agencies across Utah for their efforts in saving the lives of cats and dogs through its No-Kill Utah initiative .

According to Best Friends, in order to reach a “no-kill standard,” agencies are aiming for a 90% save rate.

Best Friends said Animal Care of Davis County , West Valley City Animal Services , and Weber County Animal Services are living proof that “No-Kill Utah is not just a slogan, but also a reality within our grasp.”

West Valley City and Weber County Animal Services were both reported as surpassing the 90% save rate, saving 95% and 92% of their animals, respectively. Animal Care of Davis County nearly reached the 90% standard, reportedly saving 84% of the dogs and cats that entered its shelter.

“[These shelters] accomplished this impressive level of lifesaving through streamlined adoptions that do away with lengthy applications in favor of conversations, same-day adoptions, extended business hours and reduced-fee or free adoptions – all of which help homeless pets and their families find each other faster,” Best Friends said in a release.

No-Kill Utah, launched by Best Friends in 2014, brought together a coalition of animal service agencies, rescue groups, and individuals across Utah to save more lives in Utah’s shelters. The goal is to end the killing of dogs and cats in America’s shelters by 2025.

The plan to achieve the goal is to provide spay and neuter services, so there are fewer animals to go to shelters, and to increase adoptions so more animals are placed into loving “fur-ever” homes.

According to Best Friends, U.S. animal shelters were killing 17 million dogs and cats every year in the ’80s. As of 2021, the number of animals killed in shelters dropped from the staggering 17 million to about 355,000.

With the near-constant stream of snowstorms coming through our mountains, the numbers keep going up and up.
UTAH STATE・13 HOURS AGO
ABC4

With temperatures dropping into the 20s in recent days, homeless advocates are furious with Salt Lake City officials after they reportedly removed several tents in the downtown area without notice on Tuesday, Jan. 24.
SALT LAKE CITY, UT・1 DAY AGO
ABC4

A Utah man is facing 11 charges after allegedly causing a multi-car wreck on Interstate 80 that led to the deaths of five Arkansas students on Sunday, Jan. 22.
SHERWOOD, AR・3 HOURS AGO
ABC4

Utah lawmakers are considering a bill that could help protect victims of domestic violence by mandating new requirements for police responding to these calls.
UTAH STATE・23 HOURS AGO
ABC4

SALT LAKE CITY, Utah (Good Things Utah) – Winter weather can be harsh on our hair. But with the right care, you can avoid the dry, itchy cold weather hair woes. We brought in the expert, Steven Robertson, co-owner of 1 Salon for some advice on how to take care of dry hair and scalp […]
SALT LAKE CITY, UT・1 DAY AGO
ABC4

A 66-year-old man has been pronounced dead after a head-on crash with a semi-truck on Tuesday.
BLACKFOOT, ID・2 DAYS AGO
ABC4

Police are cracking down on bath salt trafficking and warning the public of the dangers of the drug, according to a press release.
SALT LAKE CITY, UT・2 DAYS AGO
ABC4

One of her most notable announcements includes a historic $100 million fundraising initiative for the Ballpark neighborhood led by the Larry H. and Gail Miller Family Foundation, the city, Zions Bank and Intermountain Health.
SALT LAKE CITY, UT・1 DAY AGO
ABC4

The new year has brought a shocking string of mass killings in the U.S. — six in less than three weeks, accounting for 39 deaths.
HALF MOON BAY, CA・2 DAYS AGO