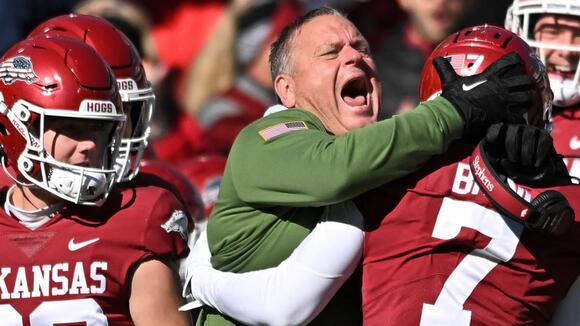 FAYETTEVILLE, Ark. – Throughout Arkansas and a good chunk of Mississippi, the overwhelming feeling after the last second rolled off the clock for the 2022 regular season was one of disappointment and worry of impending doom to come over the next few weeks.

Things have since settled down. Both schools have found some positives to cling to as December has taken hold.

However, the response from two coaches with very similar fan bases has been drastically different.

Despite the large number of players leaving in the transfer portal, Pittman managed to avoid losing players who were significant contributors going into next season for the most part. Wide receiver Ketron Jackson was starting to come into his own and Myles Slusher had an impact when he was actually on the field, but considering how unstable things felt at season's end, this is a dream for Pittman.

He even convinced KJ Jefferson to stick around and managed to benefit from Tulsa bungling its search for a head coach when it came to defensive coordinator Barry Odom.

Meanwhile, over in Oxford, it's a much different vibe. Ole Miss fans are celebrating holding onto a coach whose team fell flat on its face by going 1-4 after the middle of October while Lane Kiffin figured out whether his family would like things over in Auburn.

Since the regular season ended, a Rebels team heavily rebuilt last year out of the portal has seen a small trickle of 4-star talent leave, but no one who has made a significant impact.

As a result, things have felt very status quo in Oxford, despite the late season collapse. If social media is a sign of where coaches are from a mental standpoint, Kiffin is having the time of his life.

He's trolling people left and right and no person or subject is too taboo to touch.

Despite Ole Miss fans looking like a puppy that has been scolded and beaten way too much as they recover from nearly losing their beloved coach, Kiffin continues to take jabs at the fan base about leaving. Even if it's just in jest, it might be a little too soon for some Rebels fans.

And when he's not trolling his own fans, Kiffin is taking time to gain a bit of retribution on the local media.

While there is a photo here or there of a mysterious small town airport sign from a few days ago, it's been relatively quiet from Kiffin on the recruiting front as far as social media goes.

That's not to say Kiffin isn't out there shoring up his recruiting class. He just isn't quite as demonstrative about his efforts as he is in other areas.

In contrast, Pittman has been a public relations coordinator's dream in how he has handled the week. The Arkansas coach has built on a bit of good recent press by conducting a nose to the grindstone campaign that has him riding in cars all across the country making sure his commits hold.

It almost feels like there's hardly a Christmas tree in the country Pittman isn't looking to stand in front of and a plate of Momma's home cooking he isn't willing to eat.

There's plenty more posts where that came from and it's exactly what Arkansas fans want to see from their coach. While there would have been no patience for fluff, people around the state are always quick to recognize and acknowledge hard work.

Between the early portal success, restaurants in Northwest Arkansas filling with recruits and the barnstorming tour, Pittman has turned around a dreadful situation.

Should he put together a display during the bowl game against Kansas that shows current talent is just a few portal recruits from bouncing back into form, Pittman will be back to sitting comfortably on his throne minus all the trophies.

As for Kiffin, he might want to back off pretending he has interest in other jobs on social media. Ole Miss fans are happy they kept him for now, but if his Rebels get blown out by Texas Tech with the same spiritless performance at the Texas Bowl that they showed against Arkansas, the honeymoon from renewing his vows won't last long.

Finishing 1-5 over the last three months of the season isn't something even the most desperate fan base is going to handle well.