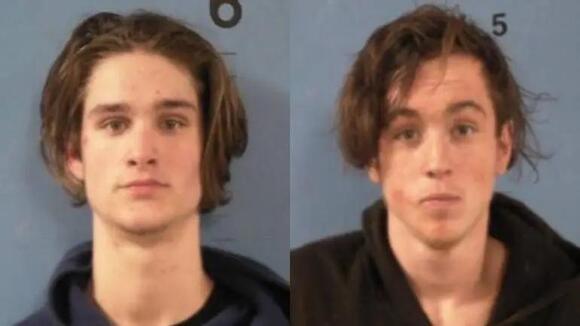 MONROE COUNTY, Ga. – Two Indiana teens accused of leading Georgia authorities on a chase in a stolen car may be involved in a series of vehicle thefts, police say.

Ethan Whaley, 18, from Rushville, and Tony Bridges, 19, from Shelbyville, were caught after trying to run away from the scene.

According to the Monroe County (Georgia) Sheriff’s Office, Flock cameras alerted authorities that a stolen car was in the area of Johnsonville Road and I-75 around 8:30 p.m. on Nov. 29.

A deputy located a gold Honda Civic with an Indiana license plate parked next to an exit. While the deputy tried to block the car in, the driver managed to get around the police cruiser and enter I-75 southbound, leading police on an eight-mile chase.

The Honda hit another car during the pursuit, police said. The chase ended when a deputy performed a PIT (Precision Immobilization Technique) maneuver. Whaley and Bridges then left the vehicle and tried to run off before police caught them.

The sheriff’s office said Whaley and Bridges are suspects in a “string of motor vehicle” thefts in Shelbyville, Indiana. They’re working with authorities in Shelbyville to investigate.

Is it illegal to warm up your car in Indiana?

With cold weather hitting the country this week — especially in the Midwest — drivers may want to warm up their vehicles before they hit the roads. But is that legal?
INDIANA STATE・2 DAYS AGO
WEHT/WTVW

The Indiana State Police say it arrested an Otwell man on drug charges due to a traffic stop on Wednesday night.
OTWELL, IN・4 DAYS AGO
WEHT/WTVW

TERRE HAUTE, Ind. (WTWO/WAWV) — A couple from Indianapolis are facing charges in Vigo County in relation to the death of a two-month-old later ruled a homicide. The charges stem from the events of August 22, 2022, when the couple reportedly called 911 reporting the baby was not breathing. The family had been staying at […]
TERRE HAUTE, IN・4 DAYS AGO
WEHT/WTVW

The man's body was found in an underwater cave Monday afternoon.
INDIANA STATE・14 HOURS AGO
WEHT/WTVW

CLARK COUNTY, Ky. (WEHT) — Kentucky State Police say a woman led law enforcement officials on a high speed chase through three counties on Thursday. According to police, officers were actively chasing a suspect on I-75 South in Fayette County when they entered Madison County past the 99-mile marker. Officers say the pursuit continued on […]
CLARK COUNTY, KY・4 DAYS AGO
WEHT/WTVW

The Kentucky Transportation Cabinet warned residents on Monday that the incoming winter storms could cause bad road conditions.
KENTUCKY STATE・7 HOURS AGO
WEHT/WTVW

MT. VERNON, Ind. (WEHT) — Many Mt. Vernon residents were left in the dark after CenterPoint crews worked for hours to restore power in the area. CenterPoint says the outages were caused by a semi-truck that hit and damaged a transmission pole. The accident even caused some people living on Evansville’s westside to have no […]
MOUNT VERNON, IN・3 DAYS AGO
WEHT/WTVW

OWENSBORO, Ky. (WEHT) — Miss Kentucky 1970 Cynthia Anne Bostick Georgeson has passed away at the age of 70. According to her obituary, Cynthia won Miss Owensboro and later went on to win Miss Kentucky in 1970. “She became an actress, working on soap operas and landing a staring role in a feature film,” her […]
OWENSBORO, KY・1 DAY AGO
WEHT/WTVW

INDIANA (WEHT) — In Indiana, you can legally own an array of guns, but carrying a throwing star could land you some time in jail. Two Indiana lawmakers are working to change that. Owning, selling, manufacturing or importing a throwing star in Indiana is a currently a Class C misdemeanor offense. Proposed by Sen. Liz […]
INDIANA STATE・3 DAYS AGO
WEHT/WTVW

Gary Brian with the Indiana Department of Transportation joined us on Eyewitness News First at Four to discuss how crews will be able to treat roads overnight in southwestern Indiana.
INDIANA STATE・9 HOURS AGO
WEHT/WTVW

Kentucky officials remind where NOT to put campaign signs

KENTUCKY (WEHT) — With spring elections on the horizon, the Kentucky Transportation Cabinet is hoping voters realize some spots are not permitted for campaign signage. Political candidates, residents, business operators, and property owners are reminded that no signs are allowed on right-of-way other than official highway signs and items approved through a permit process. “KYTC […]
KENTUCKY STATE・4 DAYS AGO
WEHT/WTVW

Indiana DNR: Always assume you are on thin ice

INDIANA (WEHT) – With the recent temperature drops across the state, Indiana Conservation Officers are advising people of the potential hazards of being on frozen lakes, ponds, rivers and streams. Indiana DNR says every winter, thousands of Hoosiers safely enjoy fishing, skating, hiking or just sliding around on frozen ponds and lakes. And every year, […]
INDIANA STATE・4 DAYS AGO
WEHT/WTVW

INDIANAPOLIS, Ind. (WEHT) – An education bill making its way through the Indiana General Assembly is addressing school dress codes. It is also causing some confusion. Some of that confusion revolves around furries, or supposed students who dress like animals. “Essentially what this means for school corporations is,” says Republican Senator Jeff Raatz of Indiana’s […]
INDIANA STATE・4 DAYS AGO
WEHT/WTVW

Here are the highlights from the January 26 Team Kentucky update.
KENTUCKY STATE・4 DAYS AGO
WEHT/WTVW

Deep dish, thin crust, fire grilled — there’s no shortage of ways to make a pizza. Yelp is praising the wonder that is pizza in 100 different ways with its 2023 list of the top places for pizza in the United States and Canada. A trio of Indiana pizza spots made the cut, including two […]
INDIANAPOLIS, IN・4 DAYS AGO