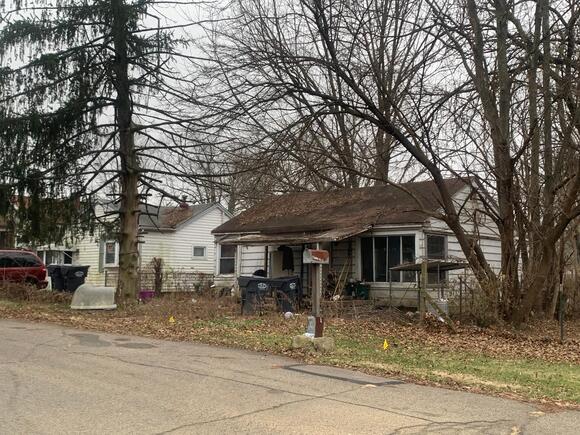 ANDERSON, Ind. — Anderson police are investigating two separate homicides that occurred within a half hour of each other on Tuesday. A man and woman have been killed with two suspects already in custody.

Despite both occurring on the city’s west side, the Anderson Police Department said both homicides are “non-related and completely separate incidents.”

The first homicide occurred in the 2200 block of W. 27th Street at around 9:30 am. Police stated after arriving at the scene officers discovered a deceased 66-year-old man. He was later identified as Jerry Gray.

The second homicide occurred in the 2900 block of W. 11th Street just after 10 a.m. Police were called to the home for a reported domestic incident with a male suspect reportedly admitting prior to officers’ arrival that he had killed his spouse.

Officers reported arriving on scene and discovering a deceased 51-year-old woman. She was later identified as 51-year-old Claudette Williams. A 61-year-old man, Curtis Williams, was taken into custody.

The Madison County Coroner’s Office will determine the official cause of death for both victims upon completion of an autopsy.

No other details were released as the investigations remain active and ongoing.

MARION, Ind. – A Marion man followed a woman and her daughter in a grocery store before trying to kidnap the little girl, police say. Marion police arrested Jason Milliner following the Jan. 30 incident, which happened around 1:30 p.m. at the Needler’s Fresh Market on Forest Avenue in Marion. The mother told police she […]
MARION, IN・1 DAY AGO
WEHT/WTVW

A nurse is accused of stealing a patient's medication and domestic battery in separate cases spanning multiple counties.
HUNTINGTON COUNTY, IN・3 DAYS AGO
WEHT/WTVW

EVANSVILLE, Ind. (WEHT) — By the end of February, dozens of Railcrew Xpress employees across Indiana will be looking for a new job. Although the majority of these layoffs are outside southern Indiana, over 20 employees in Evansville will be out of work. Railcrew Xpress shifts part of the blame to CSX, as explained in […]
EVANSVILLE, IN・3 DAYS AGO
WEHT/WTVW

Sometimes it pays for diners to have an open mind. Restaurants that may not look like anything special on the outside may have some of the best food you have ever tasted behind its doors. Cheapism is putting these so-called “holes-in-the-wall” on a pedestal and highlighting the ones that they say has the best fried […]
INDIANA STATE・1 DAY AGO
WEHT/WTVW

The folks at Social Catfish have compiled five area codes you should never answer a call from.
INDIANAPOLIS, IN・2 DAYS AGO
WEHT/WTVW

HENDERSON, Ky (WEHT) – The Indiana Office of Utility Consumer Counselor (OUCC) is inviting written public comments regarding CenterPoint Energy’s request for approval of a build transfer agreement to operate a new wind generation facility. The OUCC is currently reviewing the utility’s request and is scheduled to file testimony on February 27. Consumer comments can […]
INDIANAPOLIS, IN・4 DAYS AGO